Miracles, the ‘Signs’ of the New Life (7th Sunday of Matthew)

And the crowds marveled, saying, ‘Never was anything like this seen in Israel’ (Matth.. 9, 33).

In today’s Gospel reading, mention is made of two miracles performed by Our Lord Jesus Christ. One is the cure of the two blind men and the other the release of a deaf and dumb man possessed by a demon which was tormenting him and causing his ailment.

Christ performed these miracles in order to demonstrate and emphasize to people that He is the Messiah, the Redeemer of the world, Whom they had been expecting. The miracles were features of His messianic capacity. And the reason He performed them was His infinite mercy and empathy towards us, His most perfect creation. First He made an effort to cure the soul of the sick person and then the body. 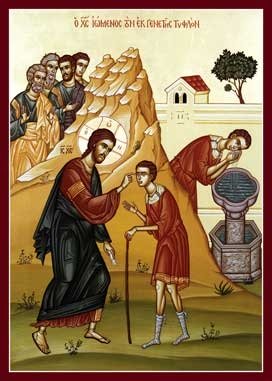 As the Lord was leaving the house of Jairus, a leading citizen whose daughter He had raised, He was headed towards another house when two blind men approached Him beseeching Him to have mercy on them and cure them. When the two blind men had learned of the wondrous acts of Jesus and, believing Him to be the awaited Christ, they approached and followed Him, calling upon Him to have mercy on them. Before the Lord gave any answer, He asked a question, which was whether they believed He could do so. Therefore faith was required.

At first glance at the signs would suggest that Christ’s priority was the cure of bodily ailments. But a closer inspection reveals clearly that the Savior’s main concern was the cure of their spiritual sicknesses.

Faith leads to the miracle, not the miracle to faith. The miracle is the fruit of faith and a consequence of God’s love. Without faith there can be no access to true knowledge of God [1]. According to Saint John Chrysostom, faith is the spiritual foundation on which the whole of the life of the faithful in the Holy Spirit is built [2].

God doesn’t intervene in our life if we don’t want Him to. The reason for this is that He respects our freedom and doesn’t wish to invade our independence.

A miracle requires our faith, as long as we’re well-intentioned and provided our soul hasn’t been corroded by evil. Faith is required for the reception of the Lord’s word, and the same faith is needed for the miracle of sight. Moreover, the miracle is a soteriological matter, concerning God, Who performs it and the person who receives it, the beneficiary.

So, given that the blind men really believed that the Lord could cure them, this is what happened. He gave them their sight. Ordinary people were amazed when they saw the miracle, because they really felt the presence of the Lord. Unfortunately, however, there was no lack of people who did not believe, who denied and doubted the divinity of Christ. In this case, it was the Pharisees who would not accept the action of God in the person of Christ. Their reaction is full of disbelief and denial and so they make a false appraisal of the events, saying: ‘he casts out demons by the prince of demons (Matth. 9, 34).

God doesn’t perform miracles in order to advertise His divinity; He has no need of publicity. On the contrary, He tells the men not to spread word of it: ‘See that no-one knows’, because there’s a danger of pride or egotism springing up in the in the heart of the beneficiaries, in the sense that they’re superior to other people. 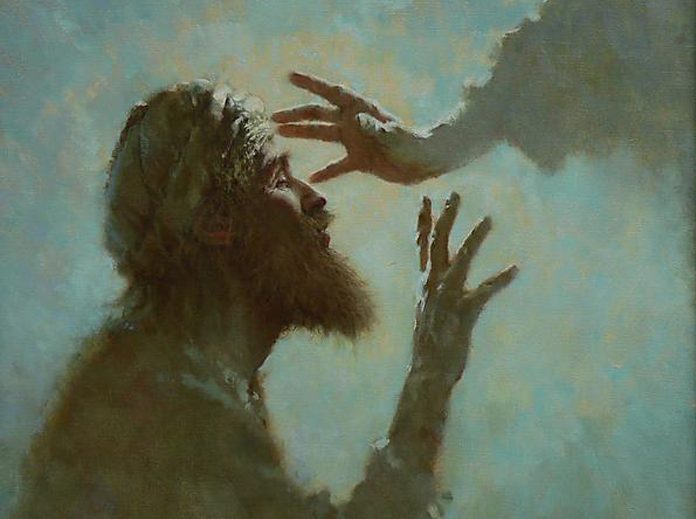 No matter how many miracles are performed before their very eyes, , people who don’t believe in God’s power will call them into question and won’t believe them, as was the case with the Pharisees in today’s Gospel reading.

After the miracle of the two blind men, another miracle follows: that of the of the deaf and dumb demoniac. ‘As they left, behold they brought to him a deaf and dumb man who was possessed by a demon. When the demon had been cast out the dumb man spoke’ (Matth. 9, 33). The cure of people possessed is a frequent occurrence in extracts from the Gospels, such as the Gadarenes and Gergesenes (Mark 5,6; Matth. 8, 29).Once again, the Messianic office of Jesus is affirmed through a miracle, since in His person, the prophecies of the Old Testament are fulfilled.

Our Lord Jesus Christ is the Messiah awaited throughout the ages and this is confirmed by His public discourse and by the many miracles He performed. He’s the physician Who came to be with the sick and to heal them. Most of the miracles are concerned with healing. What is expected from us is that we should believe whole-heartedly in His person, and that we should set our hope on Him. He is the true healer of the human race and the prospect of its spiritual and eternal healing.

To Him be glory and dominion unto the ages. Amen.