The Power of Faith

‘Go, and let it be done to you as you have believed’.

Today’s Gospel reading describes a moving incident. A Roman officer came and asked the Lord to heal his servant: ‘My servant is lying at home paralyzed, in great distress’ (Matth. 8, 6). The dialogue which  unfolded between Jesus and the centurion is wonderful and worthy of our attention. Let’s look in more detail at the features of this miracle.

The person of the centurion

Initially, he sent other people to approach Christ: ‘he sent elders of the Jews to him’ (Luke, 7, 3). Thereafter, when the path to Jesus had been prepared to some extent, he went to see him in person (Matth. 8, 5). This is an indication that he was treating the healing of his servant as a serious matter. It’s worth noting that his concern wasn’t for some relative of his, but for his servant. It’s well-known that, at that time, servants were of little to no importance. The Roman officer had deep faith in the person of Christ. As God and human, Jesus wanted to reveal this faith. Although the centurion made no such request, Jesus asked to go to his quarters. Zigavinos [Efthymios Zigavinos 1050-1118] notes that the Lord ‘wanted this great faith to be revealed to those who followed him’. The Lord was not only amazed at the man’s faith, but he also remarked on it, in order that others might imitate it. He also wanted to humble the Jews, who were conceited about their descent from Abraham, while simultaneously encouraging pagans to come to him and be saved. Moreover, the centurion’s remark that Christ didn’t need actually to go to his quarters in order to heal the servant is an indication of his great confidence in the Lord. As an ancient writer puts it: ‘the centurion held that Jesus had authority over life and death’. 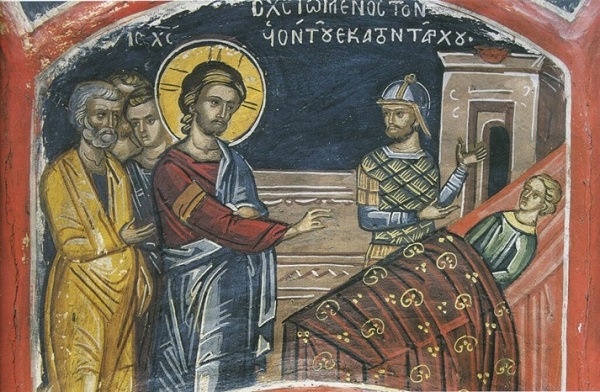 The Lord always complied with the intention of those who requested something from him. Within the Gospel texts, there’s no evidence that he ever disappointed anyone. Those who came to him always departed with some benefit. Quite often he met the simple requests of people who went to him for a favor. There’s the instance of the woman with a flow of blood, for example, who wanted only to touch his clothes to become well. In this way he gave the healing she desired. In the case of the centurion, however, he exceeded all the bounds of charitability. He didn’t merely wish to effect the cure, but suggested going to the man’s quarters to see the sick servant for himself. He did all this to reveal the faith and virtue of those who requested something of him. This is where the faith of the centurion shone bright. Christ is inventive and has a variety of medicines at his disposal for our salvation. He saw the wealth of faith that there was in the soul of the centurion, which is why he consented humbly to go to the officer’s quarters to take a first-hand look at the servant.

The power of faith

Christian believers are convinced that even the greatest obstacles to their spiritual struggle will disappear so long as they have God on their side. The Christian faithful aren’t gullible, nor are they unbelievers. They’re the faithful. Faith, love and the other virtues are incomparably superior to miracles. Faith isn’t complicated. Christ the Redeemer himself assures us: ‘Truly I tell you, if you have faith the size of a mustard seed, you will say to this mountain, “Move from here to there”, and it will move; nothing will be impossible for you’ (Matth. 17, 20). Faith even moves mountains and all obstacles disappear before it. We believers don’t merely have faith, but rather certain faith, i.e. unshakeable confidence in the person of our Lord, both as regards ourselves and the course of our lives. We entrust everything to him. For our part, we’re required to have living faith, free of doubts, full of certainty about God and the hope that he’ll never abandon us, whatever befalls us in this life.