First Discourse on the Beatitudes [2]

‘Blessed are the poor in spirit, for theirs is the kingdom of heaven’
But what benefit will we derive from this great gift of God [the promise of the kingdom of heaven] unless we discover the deeper meaning hidden in the depths of these words? In medical science, for example, there are many expensive and rare remedies that are unused and are of no benefit to those who don’t realize their value until they learn from specialists what the application of each one is. Now what does poverty of the spirit mean? The thing which ensures that we enter the kingdom of heaven. From Holy Scripture we’ve learned to identify two kinds of riches. One is admirable and the other is to be condemned. The riches of the virtues are wonderful, but earthly and material wealth is decried, because the first becomes an acquisition of the soul, whereas the second is excellent at deceiving the senses. This is why the Lord forbids us to store it, because it’s open for moths to eat and burglars to plot for (Matth. 6, 19). We’re obliged to show our preference for the riches of the higher goods, which the forces of decay don’t touch. When it says moths and robbers it’s talking about him who destroys the treasures of the soul. So if poverty is distinguished from riches, we can certainly, by analogy, conclude that there are two types of poverty. One is to be rejected, the other to be praised. People who are poor in terms of mature restraint, for example, or who lack the precious quality of righteousness, or of wisdom or good sense or any other of the valuable treasures, are seen to be starving, without possessions and poor, wretched and pitiable for their lack of precious acquisitions. Others, however, who, through the warmth of their spirit, deprive themselves of everything that has to do with evil can be shown by the Lord as being in blessed poverty, the fruit of which is the kingdom of heaven. 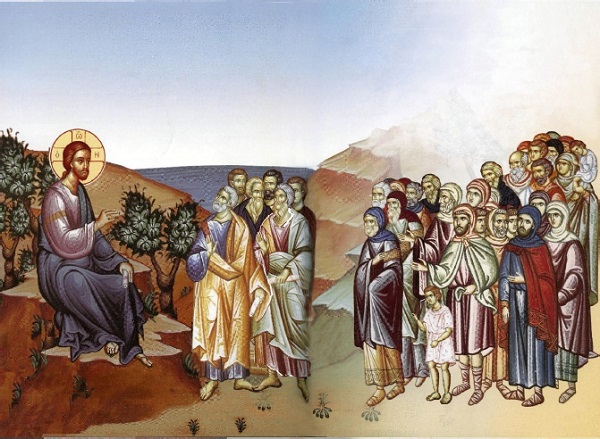 But let’s return to our deliberations on the treasure and let’s continue to try to reveal what’s hidden by mining it out. The Lord says, ‘Blessed are the poor in spirit’. We said this, in a way, above, but we’ll say it again now: the aim of the virtuous life is to become like God. But that which is pure and without passion completely escapes any imitation on our part. Because it’s simply not possible for an impassioned life to become the same as a nature which is not susceptible to passion. If God alone is blessed, as Saint Paul says (1 Tim. 6, 15) and our participation in blessedness depends on becoming like God, then imitation is impossible. It follows that blessedness is unattainable for us. Yet there are still some properties of God that people can imitate if they want to. What are these? I believe that the Lord calls voluntary humility poverty of the spirit. As a model of this, Saint Paul gives us the poverty of the Lord: ‘that though he was rich, yet for our sake he became poor, so that by his poverty we might become rich’*. All the other properties which are manifest around the divine nature surpass the measure of human nature, but humility is innate for us and is a companion to those who come from below, who are composed of earthly matter and who fall back into the earth**. You yourself acquire the characteristics of blessedness insofar as you imitate God as much as you can. Let no-one think that humility is achieved easily and without effort. It’s exactly the opposite. It’s harder work than any other virtue we seek. And why is that? Because when people who’ve received the seeds of good are asleep, they also receive the seed of another sowing from the enemy of our life and in this way the weed of pride takes root. It was in this way that the devil cast himself down to earth. In the same way he dragged the human race down with him in the common fall. So the passion of conceit sprouts in almost every person, in one way or another. There’s nothing worse in our nature than pride. This is why, when He begins the Beatitudes, the Lord uproots pride from our character, as a primeval wickedness, by urging us to imitate Him, Who voluntarily became poor and Who is truly blessed. In this way we’ll draw blessedness down upon ourselves, by choosing to become poor, as far as we can and whoever we are. Saint Paul tells us (Phil. 2, 5 ff.) to be of the same mind as Christ, Who, although He was God, although He was in the form of God, did not regard equality with God as something to be exploited, but emptied Himself and took the form of a slave.

What could be poorer for God than the form of a slave? What more humbling for the King of beings than to share our poor nature? The King of those who rule and the Lord of those in authority voluntarily took the form of a slave. The Judge of all became subject to the mighty. The Lord of creation descended into a cave. There was no room at the inn for Him Who holds all things in His hands, so He was cast into a corner, into a manger for dumb animals. He Who is pure and without blemish took upon Himself the contamination of the human race. And after passing through all the stages of our poverty, He arrived at the trial of death. Do you see the measure of His voluntary condescension? Life tasted death. The Judge was brought before a court. The Lord of the life of all beings was reduced to hearing the verdict of a judge. The King of all the other-worldly powers didn’t push away the hands of the executioners. This is the model, says Saint Paul, that our humility should be measured against.

* Saint Paul says: ‘yet for your sake’ and ‘you might become rich’, but Saint Gregory writes ‘our/we’. Given his formidable erudition, this is most likely deliberate, though there is a slight possibility that it may have been a lapse of memory: in Ancient Greek, ‘we’ was ‘ἡμεῖς’ and ‘you’ was ‘ὑμεῖς’, but by the 4th century, when Saint Gregory lived, both words were pronounced the same [eemees]. [WJL].
** As a scholar and administrator in the Roman Empire, Saint Gregory would, of course, have known Latin. It is tempting to speculate that perhaps he had the Latin in mind when he wrote this sentence. ‘Humility’ derives from humilis, meaning both ‘lowly’ and ‘of the earth’. The Greek word is of uncertain etymology, but its root ‘ταπεινός’ did originally mean ‘low’. It soon acquired the meaning of ‘coming from a lowly background’[WJL].