‘In vain have those who hate me…’

The discourse of the hymnographer is always of present interest. From the time when Cain, motivated by resentment, murdered his brother Abel, ‘wickedness has accompanied human nature as rust does copper or filth the body’ (Anthony the Great). In the same way as the Prophet Daniel was cast into a den of lions by his detractors (Dan. 6, 16-23), so the hymn-writer says in the great supplicatory canon that those who hate him ‘have prepared a pit’, in order to eliminate him. He expresses his fears to our Lady: ‘they seek to hurt my wretched body and bring it low, pure Virgin’. With these images he depicts the wickedness, hatred, envy, slander and injustice he’s suffering from his enemies and he hastens to our Lady, seeking salvation and protection from his persecutors: ‘but you are at hand and will save me from them’.

Saint Sophrony in Essex says that the dark clouds of hatred hide the heavenly light from our eyes. It’s true that every day we’re on the receiving end of people’s nastiness: at work, in school, in our social milieu and even within the family circle. People slander us, undermine us, attack us and treat us unfairly. It may well be that some, at least, of these are moved by various sorts of ill-defined and abstract ideological principles concerned with love and altruism towards humanity, but in reality their heart harbors deadly hatred towards their immediate neighbor. 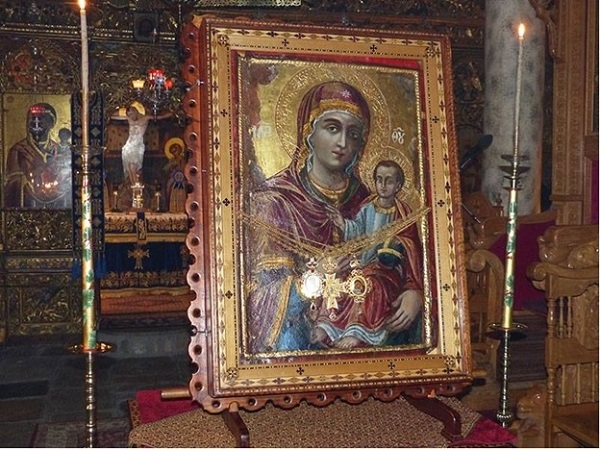 The prime author of this nastiness is the devil. He was the first to envy the state of paradise in which our ancestors found themselves and slandered God to them, saying that God had lied when he warned them of the consequences of ignoring his commandment (Gen. 3, 4-6). His very name [‘devil’ ultimately derives from the Greek ‘diabolos’, meaning ‘a slanderer’, ‘somebody who spreads false information’] means somebody who lies and separates us from God and from other people by disseminating hatred and wickedness. For this reason, Saint Gregory Palamas advises us: ‘Don’t slander, or else you’ll become like the devil, who slandered God to Eve. Then you’ll be cursed as he was’.

If we endure wickedness, hatred, slander and injustice we share in the sufferings of Christ. Saint Païsios the Athonite tells us: ‘If we remember that Christ was the most ill-treated, we’ll gladly accept any unfairness. God allows us to be wrongly treated by other people as a way of paying off some of our sins. Or to store up something in the next life’.

According to conventional social morality, people love those who love them, but Jesus Christ overturns this: ‘But I say to you who are listening, love your enemies, do good to those who hate you, bless those who curse you’ (Luke 6, 27-28). Saint Paul also tells us: ‘Bless those who persecute you; bless and do not curse’ (Rom. 12, 14). In other words, pray for the good of those who are persecuting you, ask God’s blessing upon them and don’t curse them. In the canon, the poet doesn’t ask for his persecutors to be punished  or destroyed. All he does is turn to our Lady who, as an ‘invincible bulwark’, will protect him ‘from enemies and those who hate’ him.

Just as Christ forgave those who crucified them (‘Father, pardon them, for they do not what they are doing’, Luke 23, 34), and the martyrs their executioners, so we, too, are called upon to show limitless love to those who are hostile towards us. How much pain pierced the soul of Saint Nektarios (who wrote so many beautiful texts and hymns to our Lady) when he was slandered by ruthless people motivated by demonic forces in an effort to make a mockery of him. But the saint, unshakeable in his faith, endured it all bravely and waited for God’s mercy. How much love he had in his heart when he forgave his persecutors, in imitation of gentle Jesus.

Daniel in the lions’ den prayed without any thought of malice towards those who’d slandered him. And he was saved. In the same way, if we’re to foil the plans of our enemies, we should cast out any thought of malice and revenge towards them, and pray for them with love in our heart. Our prayer will then be unblemished and pure. Let us entreat our Lady: ‘From all necessity, sorrow, sickness and harm keep me safe, all-praised Maiden; and by your power, guard me under your protection, unhurt by all danger and by the enemies who fight against me and hate me’.