‘It is truly right to call you blessed, who gave birth to God…’

While all the hymns of our Church were written by holy and devout people and are divinely inspired, the hymn ‘It is truly right to call you blessed who gave birth to God, ever blessed and most pure and the Mother of our God’, which we sing at both the small and great supplicatory canons, wasn’t written by human hand but was taught us by the Archangel Gabriel.

At a short distance from Karyes, the capital of the Holy Mountain, there lived a virtuous hieromonk and his disciple. On the evening of Saturday, 11 June 980, the devout elder set off to go to a vigil in the church of the Protato, in Karyes, leaving his disciple behind in their kelli. A short time later, the disciple received a visit from a monk he didn’t know who asked to stay in the kelli overnight.  When the time came for them to perform their monastic duties, they began singing matins. They reached the ninth ode of the canon, the disciple stood in front of the icon of the Mother of God and was about to sing the ancient hymn ‘More honorable than the cherubim’, by Kosmas the melodist. His guest, however, intervened with ‘It is truly right to call you blessed…’, which had never been heard before. He then rounded off the hymn with ‘More honorable than the cherubim…’. 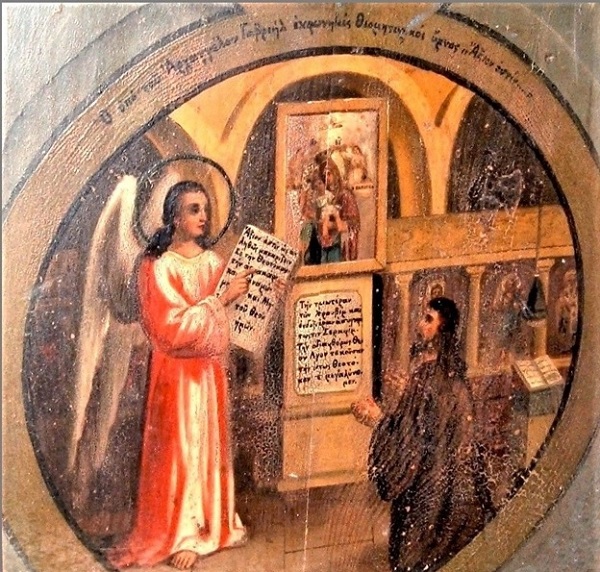 Hearing it for the first time, the disciple was in awe and asked the unknown monk to write it down somewhere so that he could remember it. Since there was no paper and ink available, the monk inscribed these holy words on a stone slab, with his finger, adding: ‘From now on, this is how you and all Orthodox Christians will sing it’. When he’d said this, he disappeared.

When the disciple’s elder returned from the vigil, the younger man told him the wondrous tale and he saw the inscription on the slab. They immediately hastened to make the miracle know to the other monks on the Holy Mountain. They sent the slab to Constantinople, to the patriarch and the emperor so that the hymn might be disseminated to the whole Church.

According to Saint Nikodimos the Athonite, that unknown monk who taught us the hymn was the Archangel Gabriel, because he was always ‘the writer of divine hymns to the Mother of God and was her custodian, servant and joyful Evangelist’. The icon of the Mother of God before which this hymn was sung for the first time was called ‘Axion estin’. It was taken from the blessed kelli to the church of the Protato in Karyes, on Athos,  as spiritual support for the Holy Mountain and the whole Orthodox commonwealth.

This angelic hymn to our all-praised Lady, the Mother of God, summarizes the faith of the Church regarding her person. Our Lady is ‘most pure’, that is, she’s the chosen vessel of sanctity, the vessel of divine grace, who, as the Fathers teach, was a stranger to all defilement of the flesh and spirit. She never sinned, in word, deed or thought. This is why we don’t just call her ‘holy’, but ‘all-holy’, which means that’s she’s the holiest of all, fully and completely virtuous, since the fulness and entirety of sanctity are made manifest in her person. She truly gave birth to God and is the Mother of our God, precisely as this angelic hymn says. Literally, not symbolically.

Given that our Lady is in truth the Mother of God, it follows that her Son, Jesus Christ is truly God who became human. This faith isn’t some philosophical theory or doctrine but rather lies at the basis  of our salvation and gives us the guarantee that this is assured. When, at an early age, Saint Païsios the Athonite heard from some people that Jesus was, indeed, virtuous, but not God, he was greatly troubled, because he reasoned that, if Christ wasn’t God, then all the spiritual struggles we engage in are in vain, since no mere mortal, however virtuous, can give us sanctity and salvation. Only God can. But our merciful Lord appeared to him, bathed in light and spoke to him the blessed words: ‘I am the resurrection and life’ (Jn. 11, 25), and in this way dispelled all his doubts. After this revelation the saint was absolutely certain in his heart that Christ is truly God and that therefore our salvation is assured.

Let us, also, work assiduously and indefatigably for the salvation granted by Jesus Christ, as God and human person, and let us adhere to the words of the Archangel Gabriel: ‘It is truly right…’. It’s right and proper that we should hymn the person who gave birth to our redeemer, Jesus, for she’s the ever-blessed and most pure, all-holy Mother of God.