The Dormition of the Mother of God. Transition to Life (2)

After the resurrection of Christ, Our Lady was the support of the apostles and the newly-founded Church. It was she who taught the new Christians, guided them and comforted them in their sorrows. In her Life we read that, three days before her dormition, the angel Gabriel visited her, as he had done at the Annunciation, and announced her glorious translation from death to life. Thereafter, in miraculous fashion, the Holy Spirit gathered all the apostles in Gethsemane, at the house of the Mother of God, so that they could obtain her blessing and be present at the funeral. After they had sung praises to the Mother of God, they asked her to grant them a final teaching, as a legacy. She then told them a parable in which this world was likened to a trade fair and those who made the most favourable transactions, that is those who made the best buys, were the ones who would make the most profit. She went on to tell them that the same is true spiritually. Those who observe Christ’s commandments most strictly and zealously will have the greatest gain and will be glorified more in the kingdom of heaven. She urged them to persist in the ‘good struggle’. 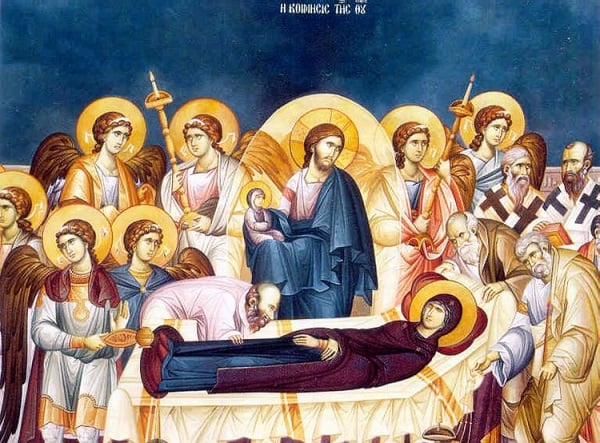 Our Most Holy Lady really is so pleased when she sees us working for our salvation. It’s a great satisfaction to her. But how greatly she herself laboured on earth, in an unobtrusive manner. Since she was sinless she didn’t need to, but did so to leave us an example of perfect asceticism. After her dormition they found in Gethsemane, where she lived, that there were indentations in the stone slabs from friction and long usage, from her prostrations.

Let us also imitate her instant obedience, her charming humility, her mystical internal spiritual labours, her ardent prayer, the constant vigilance which she always exercised, her divine love and the spiritual pain which cut her like a knife at the Cross of her Son.

To those who engage in the struggle, she becomes an ‘invincible ally’, irrespective of whether they previously lived profligate lives. We should also remember that the Mother of God became the ‘Guarantor’ for Saint Mary the Egyptian as regards her repentance. And after Saint Mary retreated into the desert, where she strove uncompromisingly, Our Lady herself consoled her through her divine manifestations.

As the protectress of monastics, it is also she who grants the divine graces to them, particularly to the Athonites. She it was who gave the gift of the prayer of the heart to Saint Maximos Kavsokalyvis, Saint Gregory Palamas, Saint Silouan the Athonite and also to the late Elder Iosif the Hesychast, who has a direct link to our brotherhood. There’s another reason why today is of particular significance for us spiritual grand-children of Elder Iosif the Hesychast, because it was the day when, in 1959, he fell asleep in the Lord, after the Divine Liturgy. He loved Our Lady so much- he called her his sweet little mother- and received so many insights, divine manifestations and gifts from her. Indeed, a major characteristic of the blessed Athonite Fathers was their affection for the Mother of God. At the mere mention of her name, they were unable to restrain their tears, the result of love for the all-pure Virgin. The mere recollection of the Mother of God, that is the intellectual absorption with the person of the Mother of God, sanctifies those who engage in it. The late Fr. Athanasios Iviritis used to say that love for the Mother of God saves people, even if they’ve done no works.

People today should make use of the mediation of the Mother of God, which is for their salvation. Whatever their sorrow or problem, they should not forget that she is the ‘help of the grieving, the protectress, the defender, and the consolation of the daunted’. They can turn to her and find comfort and an immediate solution and answer. We pray that Our Lady the Mother of God, who ‘has passed over into life’ will always give her blessing to all of us, so that we may pass through this present life unharmed, as far as possible, unendangered by the deceptions and machinations of the evil one, and that we may be made worthy of the heavenly kingdom of her Son. Amen.