The Responsibility of Love

One of the features of our society is the sense of injustice. It’s widely felt that some people are treated better than others, that, although laws exist, they aren’t applied, or, at least, aren’t in force for everyone. At the same time, it’s considered ‘reasonable’  and only to be expected that people should exploit whatever opportunities arise in order to exploit them for their personal benefit in any way available to them, regardless of whether this is illegal or immoral. At the same time, lots of people moralize and condemn others, simply to transfer responsibility and to avoid examination of their own actions and the consequences thereof. And the excuse most commonly put forward is, ‘Well, everybody does it’. In other words, while we rebel against injustice on the theoretical level, especially when we’re the ones suffering it, we also accept and justify it when it’s in our interest to do so. We have no difficulty in compromising because we’ve suppressed any moral niceties.

So when we remember that we’ve been treated unjustly and forget that we may have behaved in the same way, the taste of unfairness is on the tongue of all of us. This is why uncontrolled anger often prevails, outbursts of condemnation, blind retaliation either with harsh words or unacceptable actions directed against another person, who is usually as blameless as we are and is at the mercy of the same fate. The easy observation is that this doesn’t merely corrode the structure of society, but actually dismantles it, after we’ve first agreed that it’s in decline. It’s much more difficult to determine what’s in fact to blame for the accumulation of hostile anger as the most prominent feature of our everyday life. 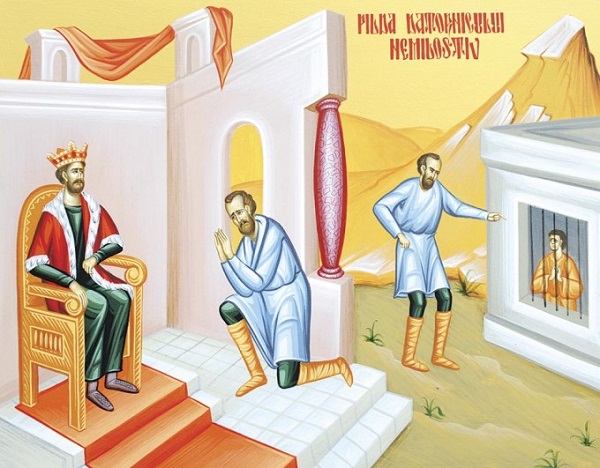 On the 11 Sunday of Matthew, the Lord again speaks in a parable. Through a story that isn’t real, he wants to define reality in human relationships and to show the most desirable and beneficial path for us to follow. A servant comes across a fellow-servant to whom he’d lent an insignificant amount of money, which had not, however, been returned yet. He attacked him physically, seizing him by the throat, and demanded the return of the small loan. Despite the entreaties of the debtor, who went down on his knees, beseeching for an extension or grace period, the lender had him hauled off and put in prison. It might be said that the behavior of the lender was entirely legal and reasonable. In the end, it was in line with the universal economic principle that ‘agreements must be adhered to’.

On the basis of this legitimate attitude, it’s absolutely reasonable that the lender would make his claim and demand that the terms of the agreement be kept, especially given that each of the parties has an obligation to look after his or her best interests. They have a duty to defend and reinforce them, and should assume that the stance of the other party is going to be rigid and obstructive. In other words, if you suffer the consequences of non-compliance with an agreement, then it’s your own fault, because you should never have entered into it on those terms, or should have made provision to ensure their fulfillment. This logic is the quintessence of the ‘capitalist ethic’, which is itself an extension of the Protestant ethic.

What did the servant-lender forget? What is it that makes his behavior to the servant-debtor reprehensible? That, just before, not another fellow servant but his actual lord and master had forgiven his debt of an incredible amount of money. There was no way that he could have paid it, even if he’d sold all his possessions, plus the members of his family and himself. The king consented to cancellation because the servant debtor had earnestly begged and entreated him to do so.

In other words, Christ reminds us of God’s infinite beneficence towards us. Blessings have been liberally provided to us, though we don’t deserve them, since we’ve disappointed God so greatly. We were in debt to such an extent that nothing could counter-balance our sinful apostasy and give us any hope of salvation. And yet, the Creator was not very angry with us. If creators- be they a painter, poet, craftsman, composer, sculptor or author- are dissatisfied with what they’ve produced, they have the right to destroy it and start something else. God didn’t do this to us, however, when we didn’t live up to his expectations and dared to rebel. He sent his only-begotten Son and Word so that, through his incarnation, he could remake human nature, not merely granting forgiveness of sins, but something much more important: sanctification, glorification and eternal restitution in the kingdom of heaven.

So if we’re in debt to such divine love, aren’t we also answerable and responsible for how we enjoy and direct it in our life? And if, though we deserve the worst punishments but instead enjoy the greatest blessings, how can we justify not imitating God the Father even to a small degree? Can we not show even a miniscule amount of love towards our fellow servants as a reflection of the torrent of love that pours out from him continuously? How can we, who are scandalously favored by the logic of love, forget it and behave towards other people with the logic of revenge?