‘Good Teacher what Good should I do to have Eternal Life?’

The rich young man in today’s Gospel reading (Matthew 9, 16-26) begins with an important motive: he seeks an answer about eternal life from Him Who is Eternal, real Life. He seeks an answer to salvation from the Savior. ‘Good teacher, what should I do to have eternal life?’ [1]. And the Lord answers him: ‘Keep the commandments’. [The young man replied: ‘I have kept all these’.] He had such confidence in himself. Such certainty regarding his moral credit. Such conviction concerning his self-knowledge. But the poor man was being mightily deceived. His attitude to Christ after this demonstrated that he wasn’t in fact observing the commandments of God, as he claimed, but was actually breaking them. He thought he had self-knowledge, but, in reality, didn’t. Because self-knowledge is knowledge about ourselves, who we are, what we are. It’s knowledge, profound sensitivity and contrition and a deep inclination to seek refuge in God. 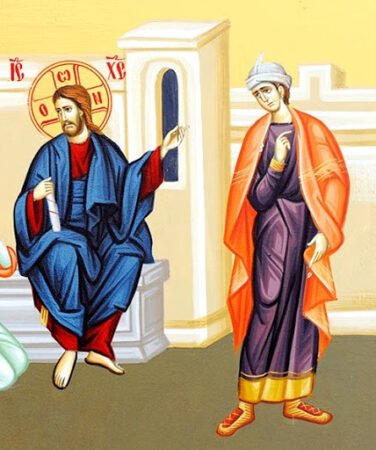 When he’d been taught the saving lessons by the true Teacher, he didn’t engrave them on his heart, nor did he apply them in practice. Instead, he went away, in sorrow, because he’d been blinded by the passion of love of riches. When riches are dispensed in the way that the Lord ordains, they have the capacity to remain with us; when we hoard them, they abandon us. Hoard them and you’ll lose them; dispense them and you won’t lose them. Most people seek wealth not for clothes or food. The devil has come up with certain ploys to give rich people an infinite number of reasons to expend money, to want to make superfluous, pointless purchases as if they were urgent necessities. And then they never reach saturation-point as regards finding reasons to spend their money, as Saint Basil the Great says [2].

Why did the Lord ask him to sell all he had and give it to the poor? Because having great wealth is totally inconsistent with living in conformity with Christ’s commandments. How could humble and meek people constantly shed tears over the fact that others are suffering, if at the same time they were increasing their own wealth in order to build new houses, buy new means of transport or expensive clothes?

This young man loved his neighbour, but only in word and sentiment, not in practice. He loved other people, so long as it didn’t affect his wallet or his possessions. Of course, as he said, the young man tried very hard to observe the other commandments. But the tare of avarice became rank in the field of his soul. His mind was fixed on earthly, perishable things as opposed to the things above, not the things of the earth, as Saint Paul tells us to do [3]. He expelled sympathy for the poor from his heart.

Instead of using the opportunity presented to him by the Lord ‘he became sad’ [4]. He left with bowed head. He melted into the crowd and was lost to history. We don’t even know his name. This is because he was unable to break the one, fateful bond, the love of riches, which became a noose around his throat and strangled him. The Lord urged the wealthy young man to distribute his riches among the poor. Within the family of the Church, it’s not possible for one person to have treasures and for others to be deprived of the necessities of life. Those who are rich have to do good with it. The truly rich aren’t those who have, but those who give. Giving attracts God’s generosity, which increases and multiplies our wealth. Those who give are enriched on an earthly and heavenly level, as is witnessed by the apostolic saying: ‘It’s better to give than to receive’ [5].

What the young man did wrong was to seek out Jesus without first having renounced his passionate love of money. But this attitude conceals greed, individualism, and the superiority which the young man feels towards other people [6]. When we present ourselves to Christ, what will count will be not our apparent health, but our hidden sickness.

Let us expel from our hearts any attachment to earthly things. Let’s seek but one thing: to be among the friends and siblings of God, who love Christ and anyone who loves Him. If you dispense your riches to the poor and, through your wealth, bring hope where before there had been the darkness of despair, you’ll find untold riches in heaven. This should be our aim: to profit from the acquisition of the Kingdom of God.

References:
[1] Matthew 19, 16.
[2] Basil the Great, Address to the Rich.
[3] Colossians 3, 2.
[4] Matthew 19, 22.
[5] Acts 20, 35.
[6] Regarding the passion of avarice, here are some quotes from the teaching of our saints:
‘Nobody is as stupid as those who are slaves to money. They think they control it, but it controls them. They think they’re masters or mistresses of their wealth, but in fact they’re slaves to a higher power’ (Saint John Chrysostom).
‘Those who pursue money are never satisfied, because it’s an ongoing process. It’s the wood and kindling of a greater desire’ (Saint Clement of Alexandria).
‘Avarice is the absence of the love of God, of the knowledge that He will look after us. It’s the loss of hope in the fulfilment of His promises and it’s an overweening sense of our own importance’ (Saint Isaiah the Anchorite).
‘If you love avarice, you’ll make your way out of this life empty-handed. If you love being in possession of nothing, however, you’ll not be deprived of heavenly riches’ (Saint Efraim the Syrian).