Sunday after the Exaltation: Being and Having

The real scourge of humankind, particularly nowadays, is the feeling of insecurity and uncertainty which is the concomitant of sin, of our effort to revolt, that is, our desire to become ‘the masters of our fate’ and thereby dethroning God from His place as our Creator and Lord. But in this way an enormous and terrifying vacuum is created within us which, when we realize it consciously or unconsciously and are horrified at the abyss of its dimensions, we think we can deal with by accumulating a great deal of material wealth, so that we can feel secure in the world and can ignore the troublesome thought of death.

But in doing all this, the only thing we achieve is to fool ourselves. Because you can’t hide spiritual poverty even with the most lavish display of material goods. Existence takes precedence over various acquisitions we may have. This is a very significant truth, of which we’re reminded in today’s Gospel reading (which is also read on the 3rd Sunday of Great Lent), especially the phrase ‘For what will it profit them to gain the whole world and forfeit their soul? 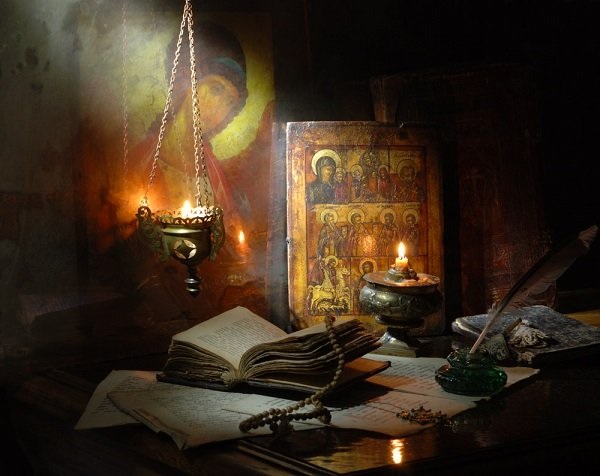 In Biblical terminology ‘soul’ means ‘life’, ‘being’; and ‘the whole world’ means ‘having’. Having the whole world doesn’t balance out the life of even a single person. People today often forget the truth of this saying of the Lord’s, because the technical potential, the scientific developments and the riches, at least in some parts of the world, make us  focus on the acquisition of material goods, on pompous speeches, and on sonorous, hollow expressions. In other words, on ‘having’, at the expense of ‘being’, of true existence.

Besides, the acts of violence which abound these days to a distressing degree are a sign that people have forgotten their true being and are interested only in having, in owning as many things as possible, and as many other people as possible so that they can lord it over them or even get rid of them. But the more that people want to have and to own, the less they become like the persons they really should be; they cease to be the way God made them. They become alienated, strangers to their real nature; they become other persons, foreign to the image of God.

Christ’s Cross, the exaltation of which was celebrated by the Church this past week, calls upon us to become aware of our poverty, which can’t be concealed by the impressive amount of things we have. We’re invited to concentrate on being, on our true existence. On the Cross, Christ had absolutely nothing at all: He was naked; Roman soldiers had drawn lots for the possession of His cloak. And yet, at precisely that moment His true being was revealed in its the most significant expression, in the offering of His sacrifice and love. This is why the Cross is a standing invitation of love for each and every person. It reminds us of our forgotten humanity, our true existence, which is the co-existence of love and other people rather, than an effort to impose our will on them, treading them down, violating and destroying them.