The Conception of the Honorable, Glorious Prophet, Forerunner and Baptist, John

‘The holy Evangelist Luke says in his Gospel that when the venerable and righteous Zachariah  entered the holy of holies in order to offer the sacrifice of incense, when he was on duty in the temple, the archangel Gabriel appeared to him and transmitted to him the glad tidings that his wife, Elizabeth, would give birth to a son in her old age, a Prophet and Forerunner, a voice and preacher and everlasting lamp, one initiated into the joy of God. God’s chief captain told the prophet and priest Zachariah about the divine conception with the words: “Your prayers have been answered”. This birth- strange because of Elizabeth’s advanced years and barrenness- was the beginning, the first intimation, of the divine and virgin birth [of Christ] by the spotless Mother of God’. 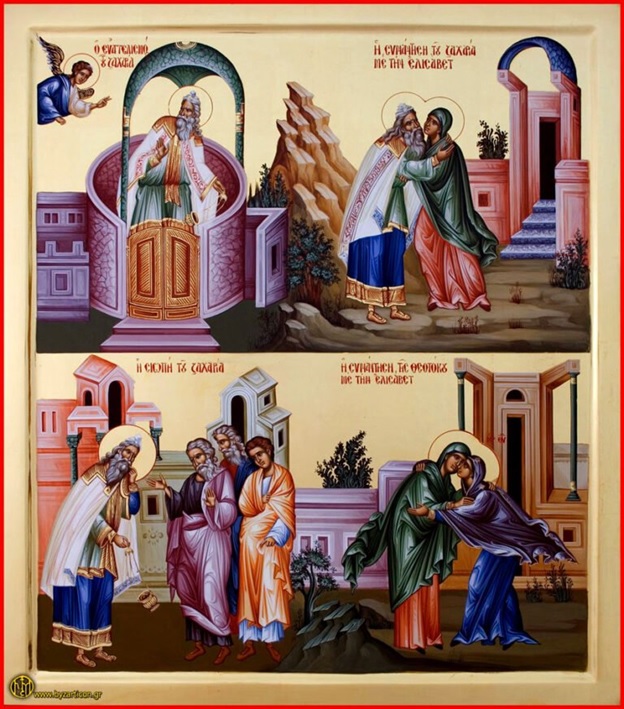 It should be noted at once that today’s feast of the conception of Saint John isn’t based on information from apocryphal gospels, which it might be possible for some people to doubt, but is a concrete fact recorded, as we indicated above, by the holy Evangelist Luke. The Gospels clearly have greater validity and value than the apocrypha and pseudographical writings. The apocrypha, dating from the 2nd century onwards, may contain elements that are true (such as those related to the birth of the Mother of God or her entry into the temple) but they also give false or heretical and misleading information at many points. By including the above event in its divinely inspired texts, the Church wishes to stress the importance of the coming into the world of Saint John the Forerunner, that is of the prophet who would prepare the ground for the advent of God himself as a human person. The event of Saint John’s conception can, again, be evaluated from the perspective of our Lord, Jesus Christ: the light of the lamp under the light of the Sun. Otherwise, it would be of the same significance and value as the conception of every other person who comes into the world- with God’s blessing, certainly.

Beyond the above situation, which is presented in a variety of ways in the hymns of the Church, and even beyond the fact that with this feast in particular the Church shows that any kind of ‘moralism’ is transcended here (a point we may take up on another occasion), what is worth noting is the reaction of righteous Zachariah. According to the hymnographer, when the archangel Gabriel told him the good news about the birth of his son, Zachariah doubted the words of God’s messenger, because he was relying on his reason and his experience. How could an old man and an old, barren woman give birth to a child? ‘The limbs of Elizabeth are incapacitated and my own old age now declares my disbelief’. The hymn-writer continues with his interpretation concerning Zachariah: it’s not only the physical order of things which is being overturned by what the angel is conveying, but something is amiss on the spiritual level, as well. ‘I came to ask for the salvation of the people, not to be given a child as you are announcing’. What must have reinforced the doubts of holy Zachariah and therefore what made him suspicious that the words of the celestial vision weren’t true was the fact that the good news about a supposed son came at a time of spiritual activity, and, moreover, at a time of prayer for the salvation of the people. Elsewhere he says: ‘My mind doubts and I do not believe your words, said the priest to the archangel. I came to ask for the salvation of the people, not for fruit of my loins’.

It seemed logical for holy Zachariah to doubt that a vision would come from God and distract him at a time when he was praying for the salvation of the people. Instead, he was being told personal information: that he would have a son. Yet in reality, this was precisely the answer to his prayer, because the birth of his son, John, would be the beginning of the salvation of the people. He would start the process of salvation by preaching repentance so that the Messiah might be received. In other words, Zachariah didn’t understand that God was giving him exactly what he’d asked for; he couldn’t encompass in his mind the way in which God was acting. And, truth to tell, this is something that causes most people to stumble. We ask God for any number of things and do so with spiritual intentions. We don’t realize that God’s ‘refusal’ to answer, or the occurrence of events ‘extraneous’ to that which we’ve requested is, in fact, God’s precise response to our requests. Perhaps we should be prepared to allow God to see further than we do and be ready to accept his will as being more beneficial for us than our own.

Let’s recall what happened to Saint Païsios: he was attacked unjustly by a priest and this upset him, though he didn’t make any reply. Later, when he began to examine his thoughts, to try and understand what had happened, he recalled that, with all his heart, he’d asked God to give him humility. And God provided the opportunity: the priest’s behavior altered a little precisely in order for the saint to strive to acquire the humility he’d asked for. So, God always hears us, always answers us, but we have to keep our eyes open if we’re to be able to discern his answer.