The Exaltation of the Precious Cross

Before the time of Christ, the cross was an instrument of punishment; it evoked fear and aversion. But after Christ’s death on the Cross it became the instrument of our salvation. Through the Cross, Christ destroyed the devil; from the Cross He descended into hades and, having liberated those languishing there, led them into the Kingdom of Heaven. The sign of the Cross is terrifying to demons and, as the sign of Christ, it is honored by Christians.

“O Lord, save Thy people and bless Thine inheritance. Grant victory unto Orthodox Christians over their adversaries, and by the virtue of Thy Cross, preserve Thy community.” 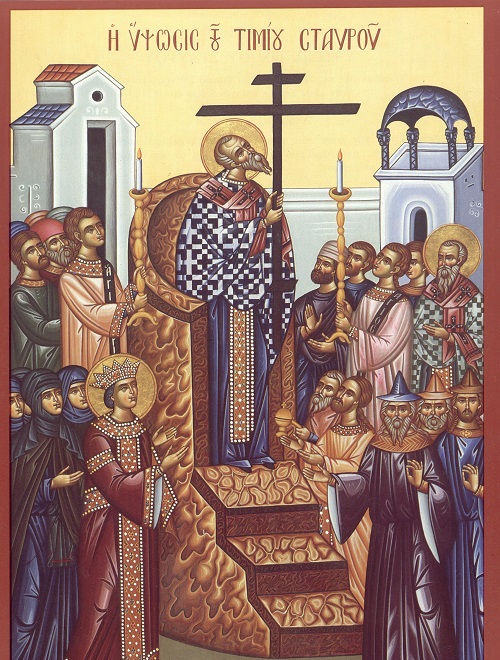 The beginning of this prayer is taken from the twenty-seventh Psalm. In the Old Testament the word “people” designated only those who confessed the true faith, people faithful to God. “Inheritance” referred to everything which properly belonged to God, God’s property, which in the New Testament is the Church of Christ. In praying for the salvation of God’s people (the Christians), both from eternal torments and from earthly calamities, we beseech the Lord to bless, to send down grace, His good gifts upon the whole Church as well, and inwardly strengthen her.

The petition for granting “victory to kings” (Grant victory to Orthodox Christians over their adversaries) (ie: to the bearers of Supreme authority), has its basis in Psalm 143, verse 10, and recalls the victories of King David achieved by God’s power, and likewise the victories granted Emperor Constantine through the Cross of the Lord.

This appearance of the Cross made emperors who had formerly persecuted Christians into defenders of the Church from her external enemies, into “external bishops,” to use the expression of the holy Emperor Constantine. The Church, inwardly strong by God’s grace and protected outwardly, is, for Orthodox Christians, “the city of God.” Heavenly Jerusalem has its beginning. Various calamities have shaken the world, entire peoples have disappeared, cities and states have perished, but the Church, in spite of persecutions and even internal conflicts, stands invincible; for the gates of hell shall not prevail against her (Matt. 16:18).
Today, when world leaders try in vain to establish order on earth, the only dependable instrument of peace is that about which the Church sings: