Today our Church celebrates the birthday of Our Most Holy Lady the Mother of God, she who bore the Son and Word of God, she who is the beginning of the salvation of the human race [1]. ‘Hail Virgin, all-holy first-fruit of the human race’ [2]. Today’s feast of the Mother of God is the occasion for universal rejoicing because of the all-pure and blessed person of the Virgin. This feast is a harbinger of joy, because from her arose the Sun of Righteousness, Christ, the Savior and Redeemer of the world.

The Mother of God’s parents were Joachim and Anna, both of whom came from the root and line of David. They were devout and righteous, but had reached old age without having had any children, which saddened them greatly. This is why they’d been asking God for years to grant them a child, on the promise that, once the child was born, it would be dedicated to him. It ought to be mentioned that, at that time, not having children was a blight and curse for a couple and a reason for everyone in society to disparage them. The priests wouldn’t even accept the gifts they offered to God’s temple, because they were childless. God rewarded their prayers and their profound piety. Through the archangel Gabriel they were told in advance that infertile, sterile Anna, would give birth to a holy child. Joachim and Anna proved to be true benefactors of the human race, because they, too, collaborated in the salvation of the world. The birth of our Lady, was the gift granted to them by God, a gift worthy of their virtue. 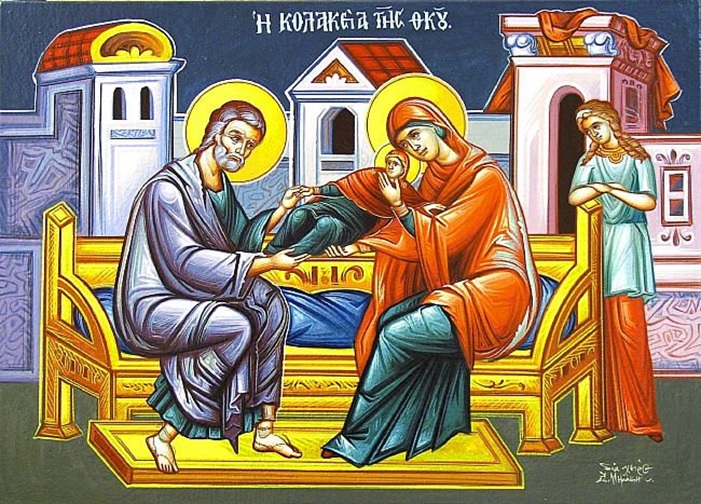 We celebrate two miracles today. The first is that the sterile gates of an elderly woman, Anna, were opened and the immaculate Virgin was born. The second is that the closed portal of Eden was opened, after having been sealed because of the disobedience of the first-created Adam and Eve. They opened because God wanted to show his good pleasure to the devout couple, Joachim and Anna. He wanted not only to give them the fruit of the womb that they desired and for which they’d prayed but also to give them her who would once again open the path to God for us.

Today, as we heard in the dismissal hymn for the feast, joy has come to the human race. But what is the joy that our Church celebrates today? Certainly it’s not joy as other people understand it. For Christians, joy isn’t human sentiment, for us it’s not enjoyment. It’s a gift from heaven, the fruit of the holy spirit. In Greek, the word ‘joy’ (khara) has the same root as the word ‘grace’ (kharis), which means the gifts granted by God to us, and it is this which saves people and places them in paradise. So joy (khara) is a gift (kharisma) from God to us.

In weaving his garland of praise to the Mother of God on the occasion of today’s feast, Saint John the Damascan says that today the gates of sterility are opened and a divine, virginal gate is presented through which God will pass and enter the world bodily; he who is beyond all beings, according to Paul who had heard inexpressible secrets [3].

The Virgin Mary is the most precious gift mankind could offer God, one who could work and act for our salvation. She’s the guarantee for our salvation and for our perfection in Christ. Through her birth, our Lady opened the way for the incarnation of the Son and Word of God and, by extension, began the task of the salvation of the human race. With the birth of our Lady, the sterility of her parents was loosed, as was that of the whole of the human race. As a loving mother, she embraces people’s problems and pain and works miracles through her protecting veil. As a faithful people, we have no other hope but her.

Our Lady is Broader than the Heavens and, as intercessor at the boundary between the created and uncreated, she takes our prayers to the throne of her Son and our Lord Jesus Christ. The Virgin is the gift of the mortal race to the Triune God. She’s already a citizen of the kingdom of heaven and is seated beside the throne of God, interceding for our salvation.

Our Most Holy Lady the Mother of God is living dogma, that is a living, well-founded principle, beyond any questioning, given that this is the empirical agreement of all the Fathers and of the Catholic Church as a whole.

The righteous forebears, Joachim and Anna, demonstrated faith and patience, and were convinced that their prayers would bring the desired result and that God would accept their pledge. We’re also called up to learn from the attitude of the righteous forebears: we shouldn’t fret, nor should we moan; we shouldn’t cease from calling upon God every minute of our life. What adamantine patience and endurance on the part of the two elderly parents. They never stopped praying and entreating God, until he gave the holy couple his inexpressible and most precious gift. Let us also display serene patience in the sorrows and temptations which God allows for our own spiritual benefit.

[1] Stikhiro at the Lity of the feast.