‘We venerate your cross, Lord’

The Universal Elevation of the Precious Cross is an important festal landmark in the ecclesiastical year. On 14 September the whole of Orthodoxy honors the cross of our Lord, Jesus Christ, which we call its ‘boast’ and ‘glory’. Sources from the Church’s history mention that the feast of the Universal Elevation was established very early on, perhaps by Saint Constantine himself, no doubt at the urging of his mother, Saint Helen, soon after the finding of the true cross in Jerusalem in about 330.

The honor paid to the cross goes back to apostolic times. Saint Paul’s epistles are full of passages in which the apostle extols the part played by the cross in achieving the salvation of the world. Paul was the first to talk about boasting in the cross of Christ. The apostolic Fathers also speak with reverence and honor about the sacred symbol, through which reconciliation with God came about and salvation was accomplished through Christ’s redemptive sacrifice. 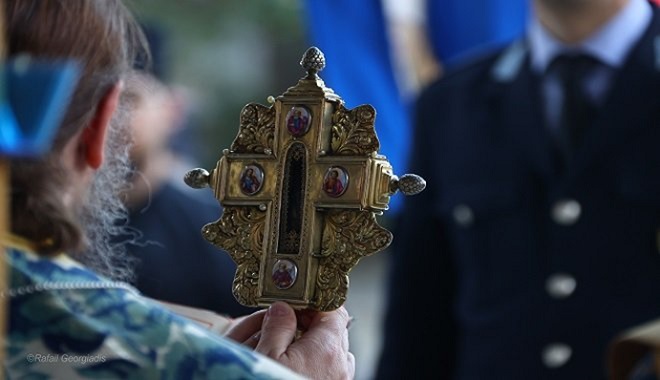 The catacombs are covered in scratched crosses. Christians who were being persecuted by fanatical pagans considered their situation similar to that of the Lord, Jesus Christ, who was made to suffer unjustly. They believed that, because of their faith in Christ, they were bearing their own cross, which is why this sacred symbol was so beloved by them. It inspired them and gave them the strength to undergo martyrdom.

The power of the cross manifested itself in 312, in the miraculous vision of Constantine the Great when he was marching against Maxentius, near Rome. Constantine expressed the new era, as opposed to his co-emperors who represented the old world and wanted to preserve it, even though it was collapsing around their ears. At midday, the great emperor saw the sign of the cross in the sky, made up of stars, and underneath it the words ‘In this sign conquer’, also formed of stars. This was on 28 October, 312. From that hour, he gave the order that the cross was to be the symbol of his army. It was inscribed everywhere, on the shields of the soldiers, on helmets, on banners and elsewhere.

The enemy was routed and Constantine eventually became the sole emperor of an immense state. He had no doubts about the fact that the power of the cross had granted him this outstanding victory, which is why he became attracted to the newly-flourishing religious faith of the Christians. This great, visionary man realized that the future of humanity rested with Christianity, as, indeed, proved to be true. He immediately ordered a cessation of the persecutions against Christians and all those who’d suffered for their religious convictions. Through the famous Edict of Milan, religious tolerance was guaranteed throughout the realm. At the same time, he adopted the Gospel principles as the foundation of law and legislation (abolition of slavery, social welfare, Sunday as a day of rest and so on). In order to be fair to all his subjects, he remained high priest of the pagan religion (pontifex maximus).

In 326, his devout mother, Saint Helen, left for the Holy Land. With generous funding from Constantine, the construction of magnificent churches was begun at sacred pilgrimage sites, at the center of which was the Lord’s most holy sepulcher. In 135, during the second sack of Jerusalem, the Emperor Hadrian had built a temple of Venus on this site.

Saint Helen’s first task was to find the Precious Cross, which had been thrown by the Romans into a nearby land-fill. According to tradition, she was led to the spot by an aromatic herb which was growing there and which we know as basil. As a result of thorough excavations,  three crosses were finally unearthed, those of the Lord and the two robbers. The ecclesiastical historians Filostorgos and Nikiforos report that the Lord’s cross was identified by a miracle: when it was placed on the body of a dead woman, she revived.

With tears in her eyes, the devout mother of the emperor delivered the Precious Cross to Patriarch Makarios, who, on 14 September in the year 335, elevated it on the dread hill of Golgotha and then placed it in the most sacred and beautiful church of the Resurrection which had been constructed over the holy sepulcher and which has survived to this day. This important event was a mile-stone in the life of the Church which is why it began to be commemorated with magnificent celebrations. This is how the great feast of the Universal Elevation of the Precious Cross came to be established.

But on this holy day we also celebrate a second elevation. In 613, the Persians occupied Palestine. They pillaged and destroyed the sacred pilgrimage sites and carried off the Precious Cross as a spoil of war, taking it back to their own country. Tradition holds that innumerable miracles took place there. The Persians worshipped fire, but believed that the Precious Cross was magic and venerated it, though they didn’t know its real identity or value. After his victory over the Persians, the Emperor Heraclius retrieved the Precious Cross and took it to Jerusalem. Patriarch Zachariah elevated it again in the church of the Resurrection. On 14 September, 626.

In his eleventh epistle, the ecclesiastical author Paulinus mentions that the local Church of Jerusalem considered that the cross belonged to the whole of Christianity. With this in mind, it decided to divide it into pieces in order to share them out to the whole Church. In this way, many pieces have been preserved and are kept as most precious treasures, principally in monasteries on the Holy Mountain. A prophecy concerning the last days says that one of the astounding events  that will take place at the end of the world will be the reconstitution of the Precious Cross.

We, the Orthodox faithful, honor the holy day of the Elevation of the Lord’s Cross in a special way. The services are of a festal nature, although a strict fast has also been adopted. We flock to the holy churches in order to venerate the Precious Cross and to draw strength and heavenly grace from it. We take with us bunches of basil as a blessing and place them on the icons. We’re well aware that the honor and veneration we pay to the cross is veneration of Christ himself, our crucified Redeemer, not an idolatrous practice, as various ill-informed heretics would have it. The cross of our Lord is our boast, the victorious banner against our greatest enemy the devil, the invincible weapon against the many faces of evil. With one voice and one heart we sing the wonderful paeon of praise, the tropario of the great feast: ‘Lord, save your people and bless your inheritance’.