There’s an old Hebrew tradition which tells of an incident from the time when the Jews were still slaves in Egypt. One day a snake bit the Pharaoh and endangered his life. A young Jew, who had a knowledge of folk medicine, managed to save him. The delighted Pharaoh said: ‘You’ve saved my life. Ask of me what you will and I’ll do it’. He expected the young man to ask for freedom, money and comforts, but to his great surprise the answer came: ‘I’d like everybody between the ages of 15 to 25 to be given a break of two hours every day so that we can pray to our God’.

The Pharaoh smiled indulgently at what he considered the ‘naive piety’ of the young man and immediately did as requested. But the young Jew was subjected to mockery and curses from his compatriots when they learned about the goings-on. They swore at him because he’d missed the opportunity to ask the Pharaoh for more useful things than prayer. The same would happen today with ‘progressives’. They’d shout: ‘Idiot. What were you thinking? The soul needs a crumb, but the stomach needs whole pieces’. 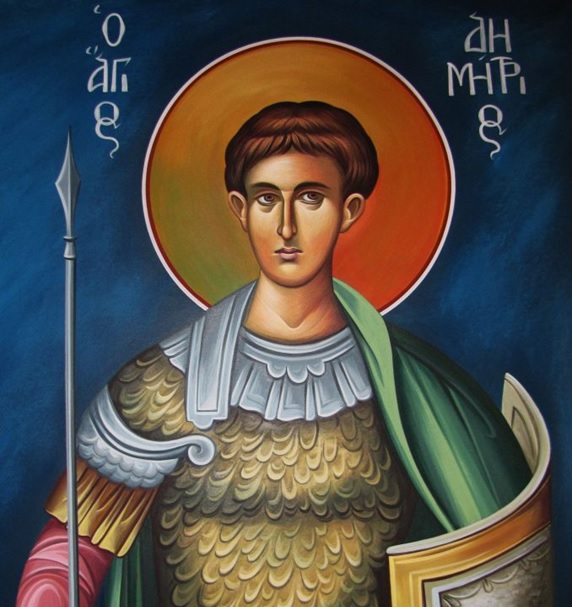 Without expecting that everyone would understand, he replied calmly:

‘Prayer is what makes people:

* and liberates them from external circumstances’.

On 26 October we commemorate the Great Martyr Saint Dimitrios, who missed an immeasurably greater opportunity. He was given the chance:

* but to be honored with a much higher rank and position in the Roman army.

But Saint Dimitrios, who had come to love prayer to the true God, had gained the three treasures which the young Jew had identified centuries before in the story which we related:

So, in full control of his faculties, rich and free, he spurned the emperor’s ‘bait’ of earthly glory and authority. He preferred to be martyred for Christ. In this way, by his example, he taught that the soul certainly can’t be fobbed off with crumbs. Crumbs aren’t enough for the soul. The soul wants big chunks.

And something else. When the soul is fed on pieces bigger than those demanded by the stomach, it doesn’t rot in the ground, but can become an inexhaustible source of myrrh, as is the case with the relics of Saint Dimitrios.