If it is easier for a camel to pass through the eye of a needle than for a rich man to enter the kingdom of Heaven, then it should have been virtually impossible for the beautiful and glamorous Ana­stasia to enter the service of Christ. The attributes that make for living a life of ease in the grand style are obstacles to be surmounted if one prefers to lead a life of hard work in a simple manner for the glory of God. To her everlasting credit, Anastasia, who was born with every advantage, willingly surrendered the flower-strewn path of her noble birth to walk down the perilously rock-strewn path of Christianity.

Anastasia was born into one of Rome’s most celebrated families in the third century. Reared in the comfortable circum­stances of nobility, knowing nothing of poverty or deprivation, she was endowed with a rare. beauty of face and form which became the envy of many women of her station. At a time when most young women take full advantage of their position and charm, she made a dramatic turn to Christ with the full awareness that her commitment would cost her more than the material wealth she abandoned. 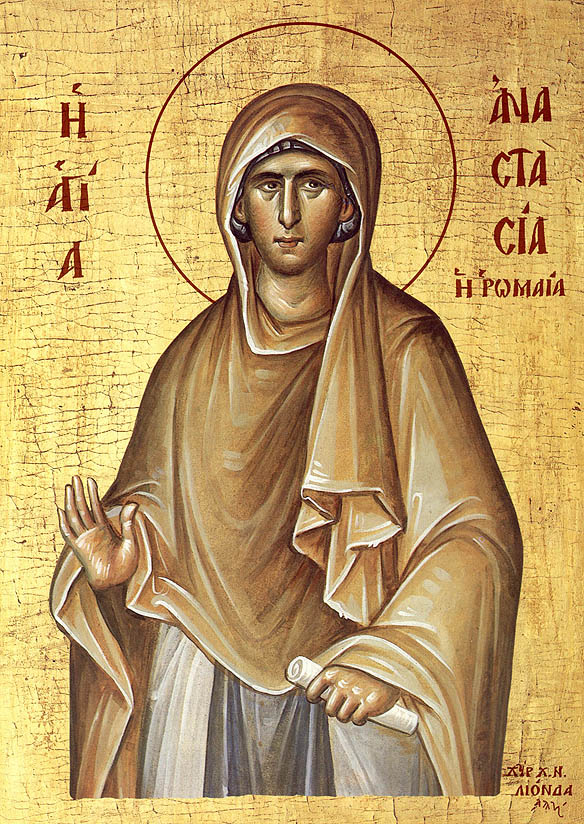 She was scarcely nineteen years old when the spirit of Chris­tianity flourished within her and revealed a beauty of soul which exceeded her beauty of face. It is ironic that her breath­taking physical beauty would prove to be her undoing, for she died an early death primarily because of envious females. Her new Christian faith was all that mattered to Anastasia, and she sought the advice of her Christian friends as to how she could best serve the Lord. Fearing for her safety because she had offended the ruling class that frowned on Christianity, they suggested she leave the area.

Anastasia had no desire to leave the country of her birth. Thus, as an alternative she chose the life of an ascetic within eremitic confines not too far removed from Rome. She di­rected her educated and highly trained mind to the cause of Christ. Her reputation for piety and sacrifice was such that soon others were disowning their social order to follow her example. This made her all the more unpopular in the higher Roman circles, particularly among the pagan women who not only envied her beauty, but came to hate her for her successful transition.

Charges of treason were brought against Anastasia, and she was summoned before the provincial governor, Probius. Marvel­ling at her beauty, he was nevertheless annoyed by her refusal to embrace the pagan gods. She remained steadfast in her alle­giance to Christ, all the while knowing the governor’s annoyance would soon turn to vengeful wrath, which it indeed did . Be­cause of her great beauty, however, he decided to let his decadent court have some sport, and Anastasia was forced to parade naked before a jeering audience that included the palace guard. 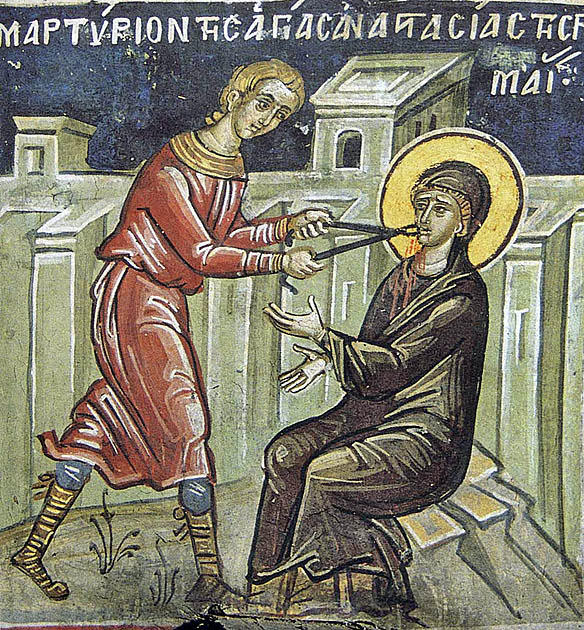 The martyrdom of Saint Anastasia, fresco from the Monastery of Dionysiou, Holy Mountain Athos, 1547

Soon tiring of this, the governor turned her over to the brutes who specialized in tormenting victims of the state’s wrath. She was ultimately beheaded on 29 October 258 and her remains were left along the roadside near Rome. She lays there for weeks in a state of preservation that was such that no insect or bird sought to prey on her flesh. At length a group of Roman Christians snatched the once beautiful Ana­stasia and gave her a Christian burial.