In a lyrical psalm [132], the great poet of our Church, the Prophet David, gives the name ‘myrrh’ to the spirit of unity among those dwelling together under the sanctified protection of the Church. They have common desires, longings, the same fight against the many-headed demon, unremitting struggles for a closer approach to sanctity, for union with God. Today, this myrrh is increased and strengthened from a new ‘vessel of myrrh’ which has opened in the wonderful and grievously-stricken city of Thessaloniki. The whole city has become a spring from which bubble rills of myrrh-perfumed waters, spreading like brooks throughout the whole of the world, in order to cleanse the faithful from their passions and their ailments and to curtail the hoary breath of unbelievers. 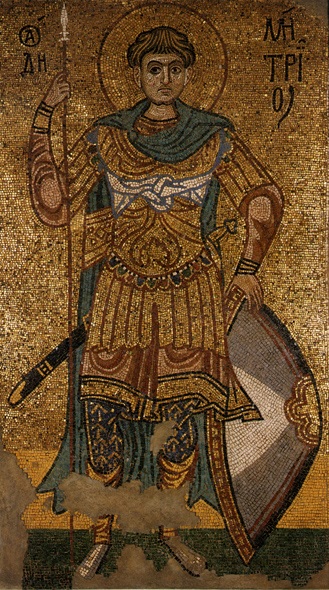 This well-spring, with its exhilarating and healing streams, which inundate the spiritual universe of Orthodoxy, is the tomb of Saint Dimitrios, the great martyr, the patron saint of Thessaloniki and the protector of every Christian. The saints belong to the whole Church, and each of us who seeks their help and intercession with God in every difficult circumstance can do so with boldness, with no thought as to where they were sanctified or martyred. But those who live in the place where the saints walked, lived, and shed their blood, feel that they have a special bond with them. In every village and every state where there’s a church dedicated to the great martyr Saint Dimitrios, there are services and festivals, with crowds of devout believers coming to honor him.

But in the beautiful city of Saint Dimitrios, his memory is celebrated with the most stately magnificence, because it’s the town where he was born, where he was martyred and where he has performed so many miracles, saving the city countless times from imminent dangers.

So, today, devout pilgrims from all four corners of Orthodoxy are gathering to honor his memory and to be sanctified by the healing myrrh from his holy tomb. The God-fearing Christians walk up the incline which leads to majestic church of Saint Dimitrios to attend Vespers or the Divine Liturgy. A host of clergy in richly-decorated vestments, the beautiful voices of the singers rendering Byzantine melodies at the feast of the Great Martyr. Even those of the faithful who are unable to be there in person still attend ‘in the spirit’, and hear the choir singing the words of the tropario at the Lity:

‘Rejoice in the Lord, city of Thessaloniki;
Exult and dance, handsomely bedecked in faith.
As a treasure in your bosom, you have Dimitrios,
the all-glorious athlete and martyr of the truth.
Delight in gazing upon the healings of the miracles.
See how the audacity of the barbarians has been dashed,
And, in thanks, cry aloud to the Savior: Lord, glory to you’.

The memory of Saint Dimitrios makes glad and bright the whole of the Church of Christ. And with the fragrance of his myrrh, he invites us to approach him closely. To cast off from ourselves the filthy wounds that sin leaves in our body and soul and let him heal them with his myrrh; to assuage our pain and fortify our weakness; to make firm our feeble and lukewarm faith; to give us fresh forces for our spiritual struggles, so that that we can combat our internal and external enemies, the temptations of the body and the spirit, of the world and the demons. Our interaction as Christians with the world of the saints is the greatest consolation and support that Orthodoxy gives to its children.