The holy martyr and apostle James, the Brother of our Lord

Saint James (Iakovos), the brother of our Lord was the first bishop of Jerusalem. He was the first to write a divine liturgy, as it had been taught to him by the Lord himself. This liturgy was later shortened by Saint Basil the Great and, after him, by Saint John Chrysostom, because the original was too long for most people. Because he was shepherd to the Church of Jerusalem and, through his teaching, had brought many Jews and pagans to belief in the Lord, he aroused the ire of the Jews. They arrested him and cast him off the roof of the Temple, killing him. As regards him being called the brother of our Lord [‘of God’, in Greek], tradition provides this explanation. When Joseph the betrothed was sharing out the land he owned among his children by his first wife and wished to give a portion to the Son of God born to the holy Virgin, some of the siblings didn’t accept this, but James had him written in as joint heir to his own portion. This is why he became known as the brother of our Lord and also as ‘the Just’. 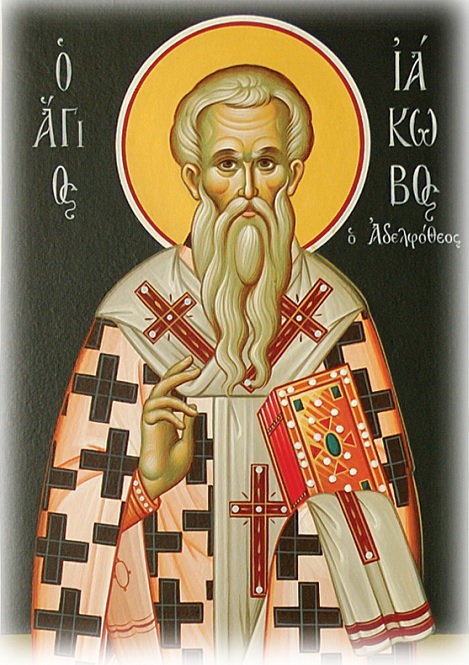 We only recently made the point that the memory of a holy apostle, a disciple of the Lord, is of particular importance to the Church, because the apostles were eye-witnesses of Christ. They heard him directly, they saw him, they watched him carefully, touched him and drank in his presence. It was to them that the Lord entrusted the task of preaching his Gospel throughout the world; it was to them that he gave authority to remit people’s sins; it was to them that he gave the gift of Pentecost: the flame of the Holy Spirit. This is why the apostles are the foundations of the Church, which is quite properly called ‘apostolic’. If there’s one apostle who’s equal or even more special in these terms, it’s Saint James, known as the brother of our Lord, precisely because he was one of the group who were thought of as siblings of Christ. He therefore didn’t simply associate with him for three years, but for thirty years and more: he’d grown up in the same family; they all called Joseph ‘Father’; they ate at the same table; slept in the same house; labored together in Joseph’s workshop, and experienced the pleasant and unpleasant things affecting the family as a whole, such as, for example, the terrible event of the flight to Egypt. The life of Saint James was interwoven with the life of Christ as a human being. Apart from the Virgin and Joseph, who was looked on as Christ’s father, who else could have been closer to the Lord?

Certainly, at the beginning of Christ’s ministry, there were reservations on the part of his family, and therefore of James, too, but later, faced with his awe-inspiring divine hypostasis, his teaching and his miracles, they accepted him and believed in him. They followed him, to the point where Saint James gave up his life for him. So James, the brother of the Lord, was also the brother who had lived close to Christ in everything to do with his human life, but was also the disciple who was initiated into all the mysteries by the Lord himself. For this reason he was accorded honor and respect by the disciples of Christ themselves, as is noted more than once by the hymnographer who composed his service: ‘Wise one, you proved to be brother to the Lord’s habitation in the flesh, a disciple and eye-witness of the divine mysteries, a refugee with him in Egypt, together with Joseph and the Mother of Christ’. And: ‘James, you were elected by the band of the apostles to be Christ’s first hierarch in the Church of Jerusalem, because you were the brother of his birth in the flesh, a companion and follower in his footsteps’. [Mattins, Lauds. See also the kontakio: ‘The only-begotten Son of the Father, God the Word, who dwelt among us in latter days, declared you, peerless James, as the first shepherd and teacher of Jerusalem, and faithful steward of the spiritual mysteries’].

These riches of Saint James, that is, that above all the other apostles he was the brother of the Lord after the flesh as well as in the faith – ‘enriched more than all with an exceptional office, brother of the Lord’ [exapostilario]- did not come without pain, however. The saint was fully aware of the gift of the Lord and strove every day to confirm what had been granted to him, by living a godly life. ‘We praise you, James, because you were granted the gift of being the brother and by your life you justified the appellation’ [ode 9, verse 2]. The reason for this was certainly that he’d fully understood that, while the grace of God is a gift, it must be activated in a life spent in accordance with God’s will, otherwise it will be lost; it will disappear into the void. In other words, whatever God gives us, he does so in the expectation what we’ll assume responsibility and undertake the mission, for the sake of other people. And in carrying out this mission, which confirms and increases God’s grace, it’s possible that we might lose our life.

According to the hymns of the Church, the initiation of Saint James into all the mysteries of the Lord constitutes the acquisition of true wisdom by him. Saint James was truly wise, because he was taught by ‘incarnate wisdom’, that is Jesus Christ himself. He is the Wisdom of God [Ayia Sophia] who is offered to each of us who will believe in him and will wish to follow his holy commandments in practice. We’re therefore discussing a wisdom that ‘comes from heaven [and] is first of all pure; then peace-loving, considerate, submissive, full of mercy and good fruit, impartial and sincere’ (James 3, 17). This is the wisdom recorded by Saint James in his wonderful catholic epistle which is one of the outstanding books of the New Testament. It’s impossible for one of the faithful to examine this book carefully and not be brought to contrition and self-censure; not to be moved to repentance; not to be comforted; not to feel the grace of God really emerging as a ray of light within their heart. ‘Having written the book which sets out practical contemplation as a spiritual compass, you have improved people’ [ode 7, verse 3]. So the least we can do today, when we commemorate the saint, is to read his epistle with care. And may we thereby be brought to greater repentance. This will be the best tribute we can pay him and will be the confirmation of his whole mission.