The Significance of the Birth of Christ for the Human Race

The Gospel reading for the Sunday before Christmas, taken from the beginning of the Gospel of Saint Matthew, contains Christ’s genealogy ‘after the flesh’, and, thereafter, God’s dispensation regarding the birth of Jesus from the Holy Spirit and the Virgin Mary. Let us turn our attention to the significance of this for each one of us.

Every year, in an atmosphere of joy and delight, the Church celebrates the Birth of Christ, and sings wonderful hymns to God Who became incarnate and re-formed our degenerate human nature. Orthodox hymnography and theology emphasize the great anthropological significance of the divine incarnation: we have been saved from hopeless degradation and from the chaos of destructive hatred by the love of God, which took on flesh and bone within history through the person of Jesus Christ. This love doesn’t simply redeem us from certain destruction, but also restores our ‘ancient beauty’; it deifies us, to use the familiar Patristic terminology.

What we as people could never have achieved because of our subjugation to the demonic power of corruption and to sin is offered to us by Him Who was born from the Holy Spirit and the Virgin Mary. It’s precisely the Savior’s descendancy from the Holy Spirit that reveals in an eloquent manner that our salvation could not come about from the wrack and ruin of a humanity inevitably consigned to death, but only from heaven, from God’s Spirit, from the source of life. 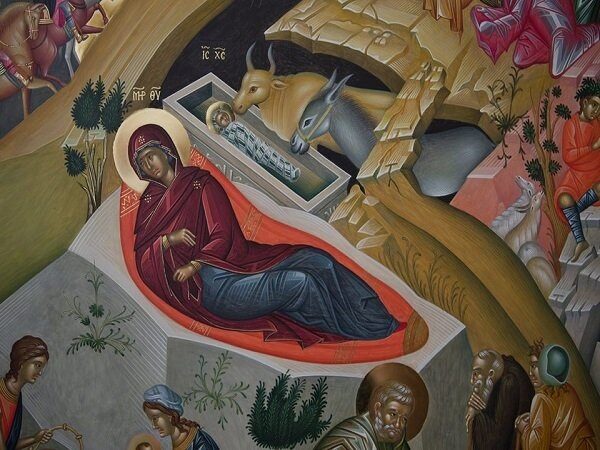 We talk about the important anthropological transformation wrought by the Birth of Christ as if it were an objective situation- related to us, of course, but also independent of us- while we forget that each of us is directly linked to this significant event of the Nativity in a direct, vital, dynamic and existential way. We have to accept that this personal dereliction on the part of each of us is due to the tragic contradiction between the fact that, although Christ was born in order to save us from the corruption of sin and death, we as people become defiled on a daily basis. We bring down ourselves and others. The angels sing the glad tidings that a Savior has been born and peace has come upon the earth (Luke 2, 11;14) but at the same time the news media bring us terrible instances of war and catastrophe.

The Birth of Christ acquires meaning as an existential fact for each of us in our particularity and uniqueness, in our own personal concern and in our anxiety and fear about our elimination and our hope for life. If the ‘sun of righteousness’ doesn’t rise in the soul of each of us, we’re wasting our time expecting the enlightenment of humankind in general. If salvation doesn’t become a personal event for each of us, there’s no point in wondering and complaining about the general prevalence of hatred, crime and warfare. And if the Birth of Christ is no more than an important, but distant historical event or an emotionally moving feast of the Church, rather than a reality within each of us, it’s meaningless to seek any obvious consequences deriving from it.

The God of love and peace became incarnate in history and, like a glowing landmark, made a clear distinction between pre-Christian darkness and Christian light, between pre-Christian hatred and Christian love, between the pre-Christian miasma of the ‘stench of death’ and the Christian hope of the resurrection. If life today is characterized by the pre-Christian features just mentioned, the fault for that lies within ourselves. The Birth of Christ doesn’t mean the enforced dominion of love and peace; rather it’s the starting-point for a dialogue, an opportunity for us to change in such a way that, if we listen to and take to heart the divine message, we’ll be radically transformed. We’ll stop seeing other people as enemies against whom we have to defend ourselves constantly, often attacking them, in fact, in order to preserve our identity, and instead we’ll see them as brothers and sisters, for whom the Son of God was born, crucified and resurrected, just as much He was as for us.

Many heterodox theologians talk about the Orthodox Church as outstandingly being the ‘Church of the Resurrection’. And this is true. But it’s no less true that the Fathers and theologians of the Church often turn their minds to the ‘mystery’ of the incarnation, which is the foundation and central core of their theology; which is the necessary condition for our salvation; and which means the change and renewal of all things.

But beyond the undoubtedly useful theological formulations concerning the incarnation of the Word, beyond the recognition of its importance for us and its regenerative power, beyond and within the festal atmosphere and wonderful hymns, what is needed for the consequences of Christ’s Nativity to become apparent, is for each of us, personally and humbly, to kneel before the manger and to take the decision to start a meaningful dialogue with incarnate Savior, Who is ever present in the world.