People who are humble, don’t have a tongue that makes observations about others who show neglect or who are living a casual life. They don’t have eyes that look out for failings in others, nor ears to listen to something that doesn’t benefit their soul. They aren’t concerned with other people, only with their own sins. They’re peaceable towards everyone, not because of friendship but because of God’s command. If you fast all week and undertake great labors, but are outside this path, then it’s all a waste of time.

Brother, accustom your voice to saying ‘Forgive me’ and you’ll acquire humility. Love humility and it’ll protect you from your sins. 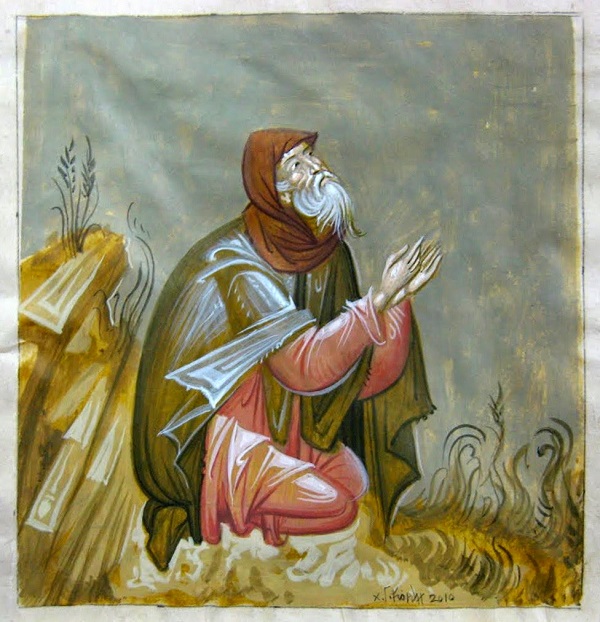 Never become wearied because of some effort, because labor, poverty, exile, harsh conditions and silence beget humility, and humility brings absolution of all sins. You should also know this: the more negligent people are in their life, the more they think they’re friends of God. But if they’re liberated from the passions, they’re ashamed to lift their eyes to God in heaven, because they see how far away they are from him.

There was a man with two servants and he sent them into a field so that each of them could scythe a certain area in the day. The first did his best to do as his master had ordered, but couldn’t finish because the task was beyond him. The other grew weary and said to himself: ‘Who could do this much work in a day?’. So he give it no thought and didn’t bother, instead falling asleep. He slept for an hour, he yawned for another and spent another turning like a door on its hinge (Prov. 26, 14). So he spent the whole day in dreamland.

When evening came, both went back to their master. He questioned them and, once he’d learned about the work done by the willing servant, he appreciated his intentions and rewarded him accordingly, even though he hadn’t managed to do everything. But because the sluggard appeared to be indifferent, he was sent away from the house.

So let’s not be downhearted in the face of any effort or difficulty, but let’s rather do our best, with all our soul, to work with humility and in the belief that God will accept us with the saints who labored so greatly.

If you don’t wound the conscience of other people, this engenders humility; humility begets discrimination; and discrimination nullifies all the passions, by separating each one from the others. So it’s impossible to acquire discrimination unless, like a farmer, you do the preliminary work. First of all, refrain from whatever is foreign to monks and this will inculcate ascetic endeavor. Asceticism begets tears and tears engender fear of God. Fear brings humility, which in turn brings discrimination. This, in turn, begets foresight and this brings love, which heals the soul from sicknesses and the passions. Then, after all this, you realize how far away you are from God.

If you don’t believe that your labors are pleasing to God, this makes God’s help protect you. Because those who’ve given their heart to God with veneration and sincerity can’t entertain the idea that they’ve pleased God. As long as your conscience is chastising you for expressions of sin, you’re a stranger to freedom. Because as long as there’s someone to chastise, there’s also someone to condemn; and as long as there’s condemnation, there’s no freedom.