Saint Basil and our Spiritual Roots

Whenever there’s mention of Saint Basil, we always highlight his studies in Athens, his ascetic life in Pontus, his lack of possessions, his contributions to society, and his literary oeuvre. It’s certainly true that the author of that outstanding theological text, the Divine Liturgy, distinguished himself as a diligent student, charismatic ascetic, selfless social worker and consummate writer.

What may not be so widely known is that, apart from that of his parents, an important role in the upbringing of the leading ecumenical teacher was played by his grandmother. Recalling his grandmother, Saint Basil the Great says: ‘Macrina the famous, through whom we were taught the words of the most blessed Gregory’. Grandmother Macrina transfused the spirit of life into her grandchildren. She passed on the experience which she had drawn from Saint Gregory of New Caesarea, the Wonderworker. 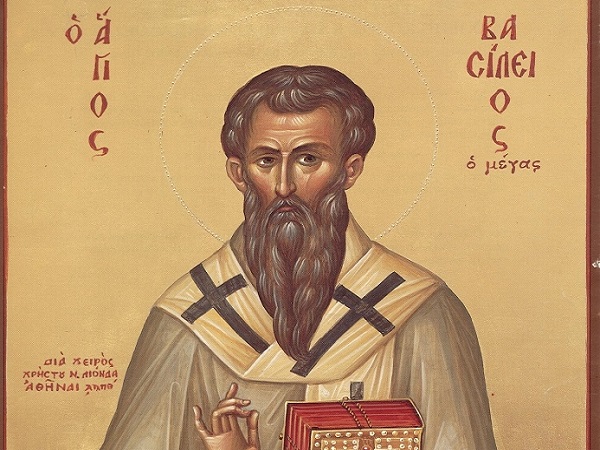 We all know that the shining examples of the extended family define both the formation of character and the emergence of a saint. For instance, Saint Paul recalls his forebears, who worshipped the true God and is grateful for that. He also remembers the unfeigned love of Lois, the grandmother of Timothy, and of his mother, Eunice (see 2 Tim. 1, 3-5), thanks to whom Timothy knew ‘the Holy Scriptures from infancy’ (2 Tim. 3, 15).

Something similar happened in the life of Saint Basil, too. The late Professor Styilianos Papadopoulos gives a wonderfully graphic depiction of the relationship between the grandmother and her grandchildren. ‘Macrina, that is Saint Basil’s grandmother, was the great figure who influenced and literally shaped three generations in the family… From early childhood, two extremely intelligent grandchildren, Macrina and Basil clung to her. The wrinkled old lady was the very beauty of the spiritual life. The children saw it in her clear forehead, despite the fact that it was lined by time and a hard life.

The children’s souls were pure, expansive and extremely receptive. The grandmother was a heavy raincloud. The children were the parched earth. The miracle happened every day. The rain fell, sometimes gently, sometimes in torrents. The earth drank in the rain and, initially, stored it- processing, transforming and understanding it would come later. The teaching and theology of the elderly Macrina were her memories: the first church in Pontus, struggle and hardships for the faith, the hidden and stony paths of virtue. Whatever wild spiritual storm might disturb the souls of Basil and his sister, the teaching of the grandmother remained steadfast and acted as a compass, as a pointer to the truth, as a means of finding balance’.

It would seem that this balance and measure have been lost in recent times. With the ascendency of the so-called nuclear family and the independence of young couples away from the family home, the contribution of the ‘extended family’ to the raising of children has all but disappeared. The role of the grandfather and grandmother, as well as that of uncles, aunts and godparents has diminished as regards the Christian upbringing of the young.

Perhaps it’s time to redefine their roles? Instead of television and the internet, which have become ‘private tutors’, might it not be an idea to re-acquaint young people with our spiritual roots, so that they can find balance and measure? To reconnect not only with their actual forebears but also with their spiritual ancestors? As a wise and experienced teacher, Saint Basil has much to say to young people about how to avoid the pitfalls of the times and to draw light from the life-giving source of the Spirit.