Saint Maria of Olonets: They Saw her Face Shining in Life and after Death

The suffering hermit lay in bed for about three weeks. Each day, after the Liturgy, a hieromonk came with the Precious Gifts so that she could make her communion.

On the fifteenth day, her face was transfigured; it shone with a supernatural light and took on the expression of blessed peace.

All her features reverted to the beauty they’d had when she was young.

Even the black marks round her lips disappeared. Her face took on a pale color, like melted wax. She calmly called for the astonished Akylina and before Matrona and Pelagia, her two nieces, she said: ‘I want to confess. Get batiushka (‘my spiritual father’). […] 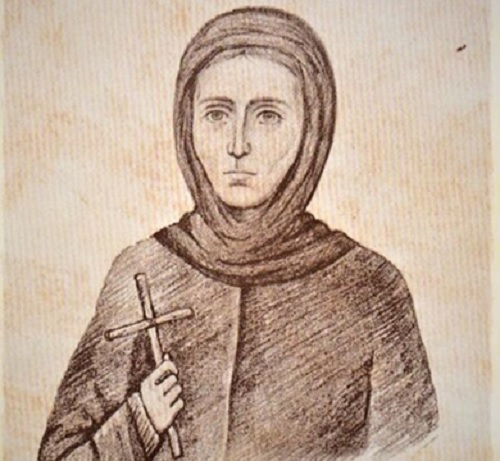 The lips of the suffering hermit moved so that she who had spent her whole life in repentance could confess for the last time. The elder was greatly surprised when he saw her supernaturally healed a short while before her demise. He heard her pure and sincere confession. […]

News of the death of the hermit spread throughout the neighboring villages and a great many people came for her funeral. Never before had so many gathered at the hermitage of Saint Nikifor, even for great feasts.

Over the three days her relics lay in the church to be venerated, there was no sign of decay.
Her body was dressed in a white, linen garment and a black scarf was placed on her head.
During the funeral service, something inexplicable and wonderful occurred. Her face, which was uncovered, shone with a heavenly light.

This sign was so marked that everyone had the impression that the light was a ray emanating from her face, just like the sunbeams that radiate from on high.

But it was a cloudy day and the few candles gave little light in the packed little church. This important sign made a deep impression and remained for a long time with both the monks and the ordinary lay people.

With their own eyes, they saw the fulfilment of the Lord’s promise in the Gospel, that the righteous ‘will shine like the sun’ in the kingdom of the heavenly Father.