The 15th Sunday of Luke (Zacchaeus)

All injustice, illegal seizure and greed is wicked and worthy of abhorrence on the part of those who love God and are of sound mind. Tax-collectors are the worst of all as regards injustice. Just as lions are worse and fiercer than any other animals in the mountains and forests, so tax-collectors and slanderers are more unjust and wicked than any other people in towns and villages [1]. Because greed is injustice and a sin, and is inhuman, the opposite of kindly concern for others. Just as warmth is the opposite of cold, light of darkness and white of black, so the tax-collector is opposed to the command that we should give succour to the poor. 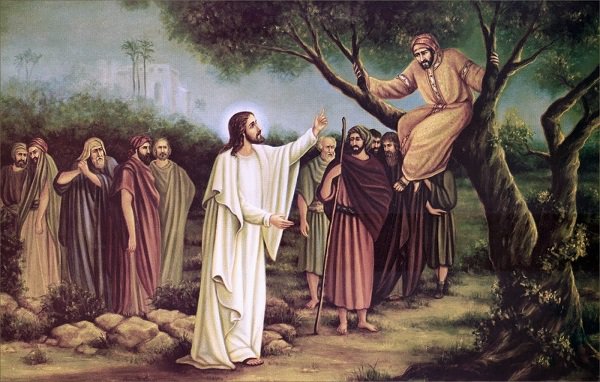 Tax-collectors can’t become rich except through the tears of the poor, and those that do become rich through such unjust profits soon lose what they have and weep bitterly. Greed is old leaven and wherever it touches it brings rottenness and stench. People who gain a little through injustice bring wrack and ruin to their own affairs, losing the large amounts they already had for the sake of the little they gained unfairly. And if it should sometimes happen that the unjust and the greedy don’t lose their possessions in short order, they still won’t get away with it. If it should happen that people escape chastisement in the here and now, they should fear and tremble all the more, because even great tortures await them.

Moreover, those who merely inherit unjustly are justly reproved. They may not have been unjust themselves, but they knew the situation full well. If those who were unjustly treated are still alive, the inheritors should return their ill-gotten gains with interest, as did Zacchaeus. They should distribute to the poor on pain of death, in order to find redemption. On the one hand, Zacchaeus returned four-fold what he’d wrongly taken and so God had mercy upon him. We, on the other hand, seize a thousand-fold and give back next to nothing. How will the Lord forgive us? If those who don’t give of their own funds to the poor are condemned, what will happen to those who sequester funds that don’t even belong to them? If those who don’t feed the starving, wet the lips of the thirsty or clothe the naked for the sake of Christ, are condemned to unquenchable fire along with the devil, what will happen to those who snatch nourishment from the poor; who persecute and turn away strangers and the sick; who imprison the poor and needy?

The good Lord loves righteousness and charity and will not accept gifts from the unjust, according to Holy Scripture, where it talks about those who are unfair and then try to make offerings to God. ‘The sacrifices of the ungodly are an abomination to the Lord’ [Prov. 15, 8] and ‘Honour the Lord with your just labours, and give him the first fruits of your righteousness’[Prov. 3, 9]. It calls the unjust ‘ungodly’ and says it’s better not to be unrighteous, better not to act on or give charity from our ill-gotten gains, because we’re simply polluting our lives and affronting the Lord by offering Him unclean gifts…

Let us then, in the knowledge that those who wish to receive Christ must themselves be good and merciful, imitate the tax-collector Zacchaeus, who returned four- fold what he’d gained unfairly and then gave half of what remained to the poor. We should know that, unless we reverse the acts of greed we’ve committed and return our ill-gotten gains, our righteous God won’t accept any generosity on our part towards the poor. This is why our merciful Lord was pleased to accept the restitution made by Zacchaeus and to tell him: ‘Today, salvation has come to this house’.

[1] Although Monk Agapios was referring to the time of Christ, his words were also applicable to his own day (he was writing in 1852, when much of Greece was still under Turkish occupation). And, in fact, if you read this to most contemporary Greeks, they’d say it was a pretty fair description of the tax authorities today, as well [WJL].