‘Wishing to receive circumcision in the flesh’

The basis of our faith

The incarnation of God the Word isn’t some sort of abstract, theoretical scheme of things, nor a myth created by a fevered imagination, but an actual event which took place at a particular time and place (Gal. 4, 4). The feast of the Lord’s Circumcision reminds us of this truth and emphasizes especially the real human nature he willingly assumed for the sake of our salvation.

The institution of the feast of the circumcision by the Church certainly coincided with the activities of some ancient heretical circles who denied the real incarnation of God the Word and taught that it was merely apparent. Some of these were the Docetists, who infamously claimed that the incarnation was not real but only appeared to be, having occurred ‘by semblance’. Together with the Marcionites and the Manichaeans, these and other heretics were precursors of the Monophysites of the 5th century, who attempted to water down the truth of the Church.

The Church employed all means to defend the unique revelation and transmission of the truth (Jude 3). Feasts were adopted in order to protect these sublime and saving truths. It’s a historical fact that the feast of Christmas, the Circumcision and Theophany were established to meet the needs of the anti-heretical struggle of the Church and later took on the festal character that we enjoy today. 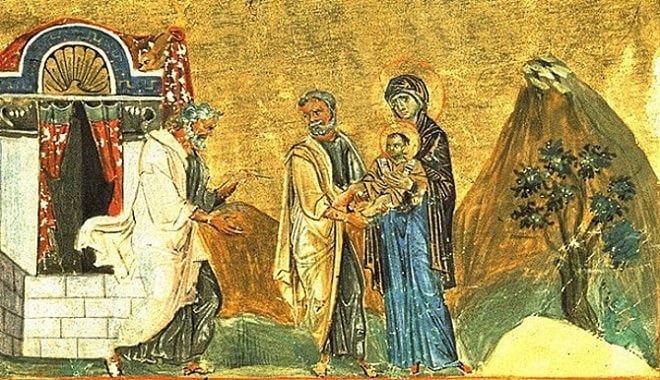 Circumcision was a practice common to many peoples in antiquity. Herodotus reports that the first  people to circumcise their male progeny were the Ethiopians and Egyptians, mainly for health reasons (Herodotus, History II, 104). Historically, it may be that the Jews acquired the custom from the Egyptians. According to the Old Testament, however, circumcision was established by God himself when he ordered faithful Abraham to adopt it as a practice that would differentiate his descendants from other peoples, so that the plan for the salvation of the world could be implemented through them. ‘This is my covenant which you shall keep, between me and you and your descendants after you: every male child among you shall be circumcised; and you shall be circumcised in the flesh of your foreskins, and it shall be a sign of the covenant between Me and you.  He who is eight days old among you shall be circumcised’ (Gen. 17, 10-12).

The circumcision of the males was undertaken by their fathers or by mohalim, specialists in the practice, on the eighth day after birth, in accordance with God’s command. It took place in the homes of the infants or, more frequently, in the synagogues, in the presence of friends and relations. The circumcision ritual was of great significance for the Jews of that time. The circumcised child was henceforth considered to be a member of the people of God, an observer of the testament which had been contracted between God and Abraham (Gen. 17, 1-12). The circumcised person was expected to keep the statutes of the Law and had the exclusive right of celebrating the Passover, in contrast to those who were uncircumcised and therefore didn’t have this right.

A name was given to the child at his circumcision. The rite of circumcision was somewhat akin to Christian baptism, of which it was a prefiguration. Just as the circumcised child became a member of the people of the Testament, distinct from the uncircumcised, so those baptized are reborn and become holy, distinct, members of the Church of Christ, destined to inherit the kingdom of God (Rom. 6, 4).

According the Saint Luke the Evangelist, on the eighth day after the birth of the Lord, Joseph and Mary observed the Mosaic commandments regarding circumcision. In a few words, Saint Luke reports that: ‘And when eight days were completed for the circumcision of the Child, his name was called Jesus, the name given by the angel before he was conceived in the womb’ (Luke 2, 21). Saint Efraim the Syrian provides the information that the circumcision was performed by Joseph the betrothed. Moreover, Saint Epifanios of Cyprus mentions that the ceremony took place in the cave of the nativity. Of course, the Evangelist offers no details concerning the ritual itself because, as the Fathers say, they would not be of any benefit as regards our salvation.

The Church took no interest in the circumcision per se, as the fulfilment, on Christ’s part, of a requirement of the law of Moses. It was more concerned with focusing, through the circumcision, on his real human nature, which the heretics denied. Saint Luke was inspired by God to include a note about the circumcision in his Gospel and this enabled the Church to rebuff any Docetist, Manichaean or Monophysite heresy.

Non-acceptance of the Orthodox teaching of our Church regarding the true incarnation of the Son and Word of God literally strikes at the foundations of the edifice of the redemption of the human race in Christ. If the incarnation of the Redeemer is not real, then we have no real salvation; Christ isn’t the real Savior, but merely one of the many founders of humanity’s religions. This problem exercised the Church greatly in the 5th century, when an archimandrite called Eftyhis (Eutyches), from Constantinople, denied Christ’s human nature. This was why the 4th Ecumenical Synod was convened in Chalcedon in 451.

The Son and Word of God is the natural Son of God, an outflowing from his own nature. He was begotten before all ages by the Father, as Scripture clearly confirms: ‘You are my son and today I begot you’ (Heb. 1, 5), as the psalmist said of God the Father and God the Son. The pre-eternal will of the Father determined to send the Word into the world as its salvation from the corruption of sin and death. Thus when the time was ripe (Gal. 4, 4) the Word took on human nature through the Virgin Mary and, when he had cleansed it from the stains of sin, he refashioned it and returned it to its natural state, as it was before the fall, making it his own, though without for a moment abandoning his divine nature. He united both natures in his human and divine person, in harmony and without confusion. He became God and human person. The union of the two natures in the person of the Redeemer means the objective fulfilment of our salvation.

The incarnation of the Word, however, is an act of descent beyond anything we can conceive: ‘being in the form of God, but emptied himself, taking the form of a servant becoming the likeness of us. And as a man in appearance, he humbled himself and became obedient unto death, even death on the cross’ (Phil. 2, 7). Unless we see the mystery of divine descent through the prism of God’s  immeasurable love for us, his creation, then it’s one of the greatest stumbling-blocks of all time. An ancient Greek axiom declares ‘God is not to be confused with people’; if this is so, then the actual incarnation of God is, in rational terms, the greatest foolishness in history. But God’s goodness and kindness overcame all the barriers between him and humankind. He made a grand gesture and humbled his Son, making him human, so that he could save the human race. He descended to our human frame, even the state of death, in order to raise us from the condition of spiritual necrosis and to lift us up to his throne in the heavens.

For as long as the incarnate Word was on earth, he was, at the same time, in heaven as God. He was everywhere present, because with his assumption of human nature he didn’t discard his divine nature. The fact that he’s the true Savior lies in this dual capacity of his, as true God and true human being. As true God, he saves by having become truly human, since he really did take on human nature and saved it in his person. Any deviation from this truth constitutes a heresy for our Church. Nestorianism had denied the divine nature of Christ and Monophytism denied his human nature. Both these dogmatic aberrations were condemned, at the 3rd and 4th Ecumenical Synods, as deviations from the truth with severe consequences for our salvation. Saint John the Evangelist made the point firmly: ‘they do not acknowledge Jesus Christ as having come in the flesh…this is the deceiver and the antichrist’ (2 John, 1, 7).

The fact of the divine incarnation should be the basis of the faith of every Christian. We should be in no doubt that ‘our Savior visited us from on high’, to redeem us from enslavement to sin and the corruption of death. According to the wonderful hymn of the feast, ‘The Savior lowered himself to the race of humankind and accepted the raiment of swaddling-clothes’. ‘He who was eight days old from his Mother and without beginning from his Father did not scorn circumcision in the flesh’ for our salvation. He made the grand gesture, waiting for us to make our own, small movement, to give him our hand so that he might save us, glorify us and make us heirs of his vast kingdom. We must break free of the notional bonds of the sinful world and raise our mind to the heavenly things. It’s only in this way that we’ll benefit from the gifts God brought when he descended.