Nature and the natural environment of mount Athos

The peninsula of Athos also differs morphologically from the other two peninsulas. We see these differences in its steep slopes and precipices along the length of the coastline, in its deeply creased terrain, and in the appearance of Mount Athos, which rises like a pyramid and surpasses 2000 meters (2003 m) in height. The name of the peninsula comes from the mountain. It was the steep cliffs in combination with the rocky shores and the sea currents at the southern end of the peninsula which motivated Xerxes to build the canal which bears his name. This forbidding terrain was probably the reason for the limited colonization throughout antiquity, but it also made the Athos peninsula an attractive site for the foundation of a monastic civilization. The geographic isolation of the area contributed to the preservation of ancient species of flora and fauna and led to the emergence of 37 endemic species.

The Athos peninsula differs climatically from the other two peninsulas of Halkidiki, which both sustain the typical, Mediterranean climate. The climate of the peninsula of Athos is influenced by having a higher elevation above sea level and also by the north easterly winds which are prevalent in the region and by the ascending and descending air currents created by the emergence of Mount Athos. Therefore, in the Athos peninsula we see a pure Mediterranean climate only in the north and along the length of the coastline where the coastal elevation varies from 150-500 (800) m above sea level, depending on the site, the slope and the kind of rock present. There is a dominance of Aleppo pine and evergreen, broadleaved trees in the region.

The inner regions maintain a transitional climate ranging from the Mediterranean climate to the Continental climate with mainly deciduous, broadleaved trees (oak, chestnut, beech) and the mountain, Mediterranean coniferous trees (fir and black pine). In the highest parts of Athos, above 1600 m approximately, a pure Continental climate exists accompanied by the appearance of alpine vegetation. As a result of the wide variety of geological and rock formations, the many faceted topography and the variation of climate types, a great biodiversity appears on the peninsula of Athos at all levels. An indication of this diversity is the large number of species of flora and fauna (over 1200 species of plants and 350 species of mushrooms).

The vegetation includes about 50 types of plant communities. The types of vegetation and the landscapes which they create form a unique mosaic of varieties, which one rarely meets in such a small area as the 30.000 ha of Mount Athos. The history differs greatly from the remainder of Halkidiki. While throughout antiquity the other two peninsulas of Halkidiki, Kassandra and Sithonia, had become colonized very early and developed important cities, many of which had been built by the Athenians, the peninsula of Athos, due to its isolation, seems to have been sparsely populated.

Because of the calm seas which surround them and the existence of natural harbors, the forests of Kassandra and Sithonia were used to supply wood which was suitable for ships and construction as well as metals and mining products for the markets of Athens and later, to the countries of the Macedonians. As a result, many of the species which existed in ancient times were depleted and even lost.

To the contrary, the forests of the Athos area seem to have remained almost unchanged, retaining their ancient characteristics as pertaining to the mixture of species. This continues to the present day in some remote spots.

The monastic life, which also created favorable conditions for the development of the natural environment, appeared early on the peninsula of Athos, which was later known as the peninsula of Mount Athos. This monastic trend was sporadic until the middle of the 10th century AD. In the middle of the 10th century (963), the building of the Great Lavra Monastery was begun, followed by the systematic development of monastic life which was completed in the middle of the 15th century. A total of 20 autonomous, ‘Holy Monasteries’ make up the community of Mount Athos. This community, with its rich history of more than 1000 years, has had its periods of prosperity and decline. Though it suffered as a result of many different invaders, its holy, monastic spirit remained intact. In the periods of prosperity the number of monks exceeded 20,000. If one also considers all of the lay people who worked at such occupations as laborers, loggers and builders, then we see that Athos was teeming with life. This fact had effects on the natural environment, and especially in the areas immediately surrounding the monasteries.

A large part of the timber which was needed for building and repairs came from the forest of Athos. Wood from the oak and the chestnut forests was especially in demand, but wood from fir and black pine was also used. Even with the crude methods of logging which were carried out in those days and the limited means of transport, irreparable damage was not done to the varieties of plant species.

We need to take into consideration the great ability that the natural ecosystem has for regeneration. The ecosystems of evergreen, broadleaved trees in the area where most of the monasteries, kellia and sketae (houses) were built did suffer some important effects due to the collection of firewood to cover energy needs. Even today, the main energy source of many monasteries, sketae and kellia is firewood and charcoal. This is the reason that the evergreen, broadleaved trees are suffering to a greater or lesser extent around almost all of the monasteries. Aside from the need for the space for buildings and work areas, the monasteries needed space for agriculture in order to produce food for the monks and visitors.

The main agricultural activities of the monks were the planting of vegetable gardens, olive groves, vineyards and fruit trees. In order to provide the necessities to live, some of the forested land had to be cleared. This cleared land did not exceed 5-10 % of the total land of the peninsula, which is approximately 30,000 ha (300 km2). Thus, the ecosystem and the landscape did not remain completely untouched. The need for wood to cover requirements for building and firewood affected the structure and makeup of the ecosystem. Because all of the tree species which make up the ecosystem of Mount Athos, except for the conifers, are generally able to sprout and regenerate easily, and because of the fact that there is an absence of grazing, domestic animals (particularly goats), reparations to the ecosystem occur in a relatively short time. This is the reason that the landscape has remained relatively unchanged over many years. The ecosystem is able to take over and repair itself even after forest fires because of the ability of the coniferous trees, especially black pine, to regenerate after fires, and due to the ability of the broadleaved trees to coppice.

From the middle to the end of the 19th century, a new period for the forest ecosystems of the peninsula began. The mining needs of Halkidiki and the increased use of chestnut wood in agriculture led to the beginning of systematic management of the use of the forests which had become a significant source of income for many of the monasteries. The enforced method of clear cutting with the expulsion of fir and other species resulted in a reduction of the tall, mixed seed forests in the middle zone and the creation of a low chestnut forest. This is because that coppices of chestnut grow very quickly in comparison with the other tree species, and are also more tolerant of shade. What was once the thick, lavish, mixed forest of ancient and towering trees with their huge trunks, which Griesebach (1839) described, was transformed into an almost uniform coppice of dense chestnut.

Summarizing, we wish to emphasize that the great variety of geological and rock formations, the deeply wrinkled terrain, the high elevation above sea level of Mount Athos, in combination with the great variety of climate types, the isolation of the area and the lack of grazing animals from nomadic herds, has created a mosaic of vast types of vegetation from the pure Mediterranean to the alpine. They are characterized by admirable vitality and density and great biodiversity of flora and fauna. The landscape created by the combinations of vegetation and terrain is of rare beauty and variety. It is unique. It ranges from the ‘tame’ coastal zones to the ‘wild’ landscapes of the gorge, the stony ground and the towering rocks. All of this is encompassed by the phrase, ‘the magic of Mount Athos’, and it must be preserved in its natural state. The natural environment of Mount Athos constitutes an unbroken link in all of its cultural heritage. 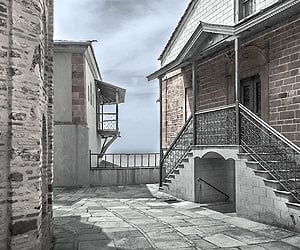 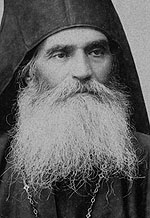 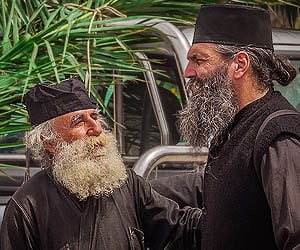 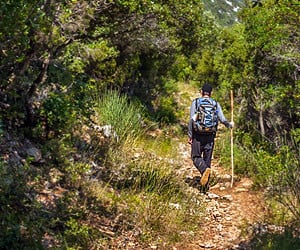 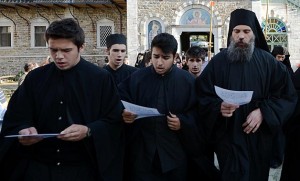