Saint Spiridon, the patron of Corfu

The holiest shrine on the island of Kerkyra (Corfu) just off the western coast of Greece is the tomb of a fourth-century saint whose body after sixteen centuries is in such a remarkable state of preservation that every year he is carried in solemn triumph through the streets on the occasion of his feast day. One of the better known saints because of this phenomenon, St. Spyridon will doubtless remain for all time a religious figure more familiar than those whose remains are not around to remind Christians annually of their greatness. His place in the holy company of saints would be assured and his prominence established even if the whereabouts of his holy remains unknown. 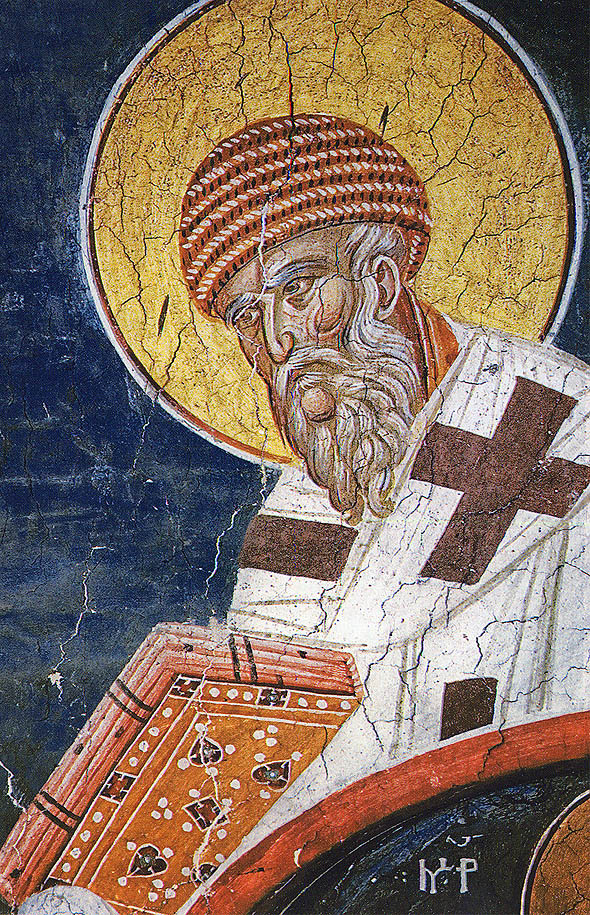 St. Spyridon was thrust into notability by the climactic events just prior to and including the historic Council of Nicaea of 325, after a somewhat prosaic and less-than-spectacular service to the Lord in the obscurity which he seemed to prefer. Born on the island of Cyprus, he preferred the tranquillity of the countryside he roamed as a boy while shepherding his father’s flocks, and even after he rose to the office of bishop he would find the time to tend the sheep on a hillside, where he knew complete contentment.

St. Spyridon’s beginnings were inauspicious enough, coming from a rural family which for generations had lived in such re­moteness that there was no school for miles around and what little education there was to be had was imparted by parents whose knowledge was severely limited by their illiteracy. Al­though he was exceptionally bright, Spyridon was no exception to the rule that doomed most youngsters who were never taught to read or write. The communities that lacked a school never lacked accessibility to a countryside church, and as a boy Spyri­don’s church attendance was regular. He displayed considerable fervor and remarkable intelligence, which enabled him to mem­orize long passages from the Bible simply by listening.

Although he was needed at home, Spyridon was not denied the formal education he deserved. His parents, not wanting to see his great talent and love for Christ restricted, sought counsel from their priest, who in turn arranged for the boy’s education and religious training.

Ordained a priest just after the turn of the fourth century, Spyridon was assigned to a rural community much like the one in which he had been reared and made it his first act to use the church as a school for the education of children whose parents he convinced that their offspring could be made more useful citizens if they were given time enough from their chores to learn at least the rudiments of education, particularly how to read and write. His dedication to the people and his complete commitment to the Savior did not go unnoticed, and he was appointed bishop of his province, a post in which he won the admiration of his flock and prominence in the international Christian community. Whenever he could get away from the responsibilities of his office, he chose to rest and refresh himself by returning to the hillside and to the sheep on the family farm.

It was in 325 that the momentous Council of Nicaea was convened at the request of the Emperor Constantine to re­solve the issues so divisive in that era, a conclave to which the greatest figures of Christianity were invited. Among them was the shepherd-bishop Spyridon, whose reputation preceded him and who was therefore made one of the directors. At this meeting Spyridon met St. Nicholas, with whom he formed a lasting friendship, one destined to form a parallel of their lives which comes down to us as a glorious part of the rich heritage of Christianity. Spyridon acquitted himself most honorably at this meeting and was instrumental in reconciling differences, which allowed for a successful conclusion to the most important council in early Church history.

Like his friend Nicholas, Spyridon fell victim to pagan persecution and was one day hauled off to prison, where he was so brutally beaten by the guards that he lost the sight of one eye. Years of misery were to follow then, for rather than execute him the Romans consigned him to the mines. There the gentle bishop lived in squalor and labored in agony for many years before at last he died. Faithful to the end, his last words were in praise of the Lord. His body was cast into a ditch from which it was taken by friends for Christian burial. Later removed, his body lies intact to this day, preserved by the hand of the God. 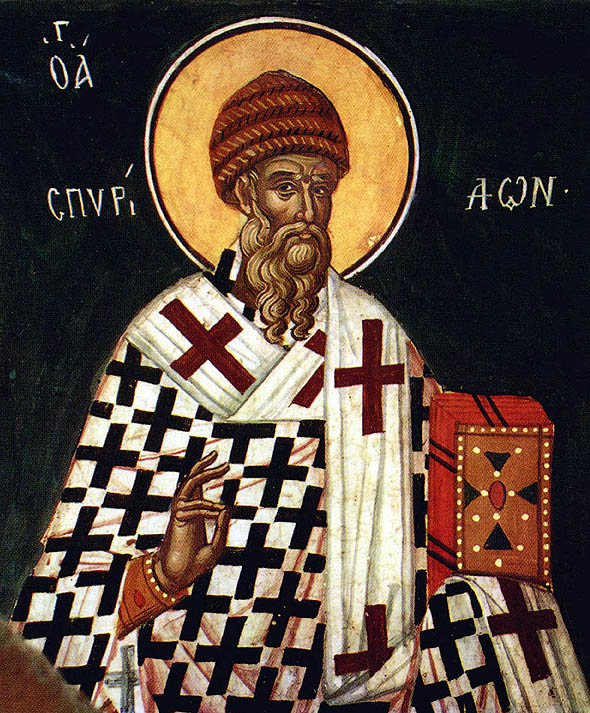 The Miracle of Saint Spyridon

Approximately thirteen hundred years after his repose, Saint Spiridon’s body remains incorrupt on the island of Corfu generating an untold number of miracles. What is significant about this extraor­dinary miracle and possibly shocking to some of our Christians is the fact that God or His Saints do not necessarily accept the offerings or the prayers of heretical and deluded Christians.

In  1716 the Turks had the island of Corfu under a tight seige. They had 50,000 troops and a good number of ships surrounding the is­land, cutting its lifeline from land and sea.

The barbarian armies were concentrated at the far walls of the city. Pizani, a general of the forces of theVenetian Republic, was anx­iously anticipating the oncoming enemy attack (Corfu and the nearby islands were occupied by Italyat the time). At daybreak on August II ,1716, St. Spyridon the patron Saint of the island, appeared in front of the enemy lines holding a glistening sword in his right hand. His austere and grandiose appearance horrified the aggressors who began to recede. The Agarenes, panic-stricken by the most awesome presence and fearless attack of the Saint, abandoned weapons, ma­chinery and animals running for their lives. This great miracle be­came known throughout the island. The Turks had left behind 120 cannons, a good amount of weapons, ammunition, animals and food.

After this powerful, surprising and most obvious miracle, the Vene­tian ruler Andrew Pizani, a Papist, wanted to erect a Papist altar in the Orthodox Church of St. Spyridon (forever pushing for this was also the Papist Cardinal of the island). However, St. Spyridon appeared to Pizani in a dream saying, “Why are you bothering me? The altar of your faith is unacceptable in my Temple!” Naturally Pizani reported this to the Papist Cardinal who answered, that it was nothing but an evil fantasy of the devil who wanted to nullify the noble deed. After this Pizani was very much encouraged, so he ordered the necessary materials to commence construction of the altar. The materials were piled up outside of thetempleofSr. Spyridon. When the Orthodox priests of the temple and the Greek leaders of the island realized this, they were cut to the heart. They asked to meet with Pizani to beg him to put a stop to this. Pizani’s response was quite disheartening. He bluntly said, “As the ruler, ‘will do whatever’ please!” At that mo­ment, the Orthodox community of the island turned their eyes to their Saint beseeching him to put a stop to this abomination.

That same night, St. Spyridon appeared to Pizani as a monk and told him, ‘” told you not to bother me. If you dare to go through with your decision, you will surely regret it, but by then it will be too late.”

The next morning Pizani reported all this to the Papist Cardinal who now accused him of being not only faithless but “yellow.” Again, after this, the ruler mustered up enough courage to order the con­struction of the altar.

The Papists of the island were celebrating their triumph while the Orthodox were deeply grieved. Their grief could not be comforted and with tears they begged for the Saint’s intervention to save them from the Papist  abomination. The Saint heard their prayers and intervened dynamically. That evening, a terrible storm broke out unleashing a barrage of thunderbolts on Fort Casteli, the base of Pizani and his ammunition barracks. The entire fort ended up in a holocaust. Nine hundred Papist soldiers and civilians were instantly killed from the explosion, but not a single Orthodox-who were not allowed in the fort after dark-was harmed. Pizani was found dead with his neck wedged between two wooden beams. The body of the Papist Cardinal was found thrown a great distance from the fort. But the most amazing fact is that the same night and at the same hour another thunderbolt struck in Venice targeting the compound of Pizani, burning his portrait that hung on the wall. Strangely enough nothing else was damaged. Also, the guard of the ammunition barracks saw the Saint draw near him with a lit torch. He was carried by the Saint near the church of Crucified without a single scratch. 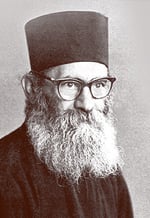 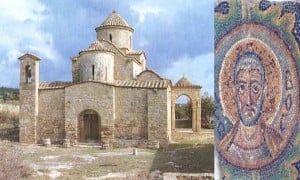 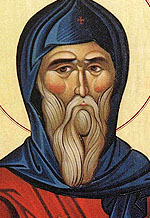 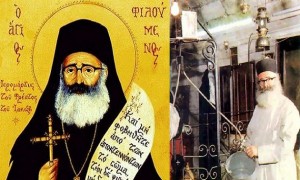