Τhe Holy Martyr of the 20th century, Philoumenos the Cypriot, came from the village of Orounta of the province of Morphou. The neomartyr was born in 1913 and was a child of George and Magdalene Hasapi or Ourountioti, and the twin brother of Archimandrite Elpidios. Even though his parents came from the village of Orounta of the Metropolitan area of Morphou, they lived at the parish of St. Savvas in Nicosia, since his father had his own inn and bakery there. Together with his brother Elpidios, they showed a particular enthusiasm for prayer and read the lives of the Saints, particularly they were touched by the life of Saint John the Kalyvitis, who in some way made an impact on them, to the point of desiring to follow the life of monasticism. Also, apart from their mother, their grandmother Loxantra, had in particular influenced them in learning the ways of the Church and in developing a truly Orthodox conscience. At the age of 14, the two brothers left for the Monastery of Stavrovouni and then left for Jerusalem, where they attended High School there. After they finished High School in 1939, Elpidios served as a priest in different places and died on 29 November 1983. Philoumenos remained in Jerusalem and in 1979 was appointed as Abbot of the Monastery of Saint Jacob’s Well. While living there, on November 29, 1979, during the time when the Saint was taking vespers, he was murdered by Zionist Jews with an axe.

The week before, a group of fanatical Zionists came to the Monastery of Jacob’s Well, claiming it as a Jewish holy place and demanding that all crosses and icons be removed. Of course, the Saint pointed out that the floor upon which they were standing had been built by Emperor Constantine before 331 A.D. and had served as an Orthodox Christian holy place for sixteen centuries before the Israeli State was created, and had been in Samaritan hands eight centuries before that. The group left with threats, insults and obscenities of the kind which local Christians suffer regularly.

After a few days, on November 29, during a torrential downpour, a group broke into the monastery; the saint had already put on his epitrachclion for Vespers. The piccemcal chopping of the three fingers with which he made the Sign of the Cross showed that he was tortured in an attempt to make him deny his Orthodox Christian Faith. His face was cloven in the form of the Cross. The church and holy things were all defiled.

The body of the Saint was handed over to the Orthodox six days after his massacre, but retained its flexibility and was buried in the cemetery of Mount Zion. After four years, as is customary, his body was exhumed. It was found to be substantially incorrupt and had the smell of a beautiful fragrance. Then, the tomb was closed and was reopened during the Christmas of 1984, when the body was found to be partially incorrupt and was placed in a glass shrine in the northern part of the sacred Holy Altar in Mount Zion.

Hieromartyr Philoumenos was ranked among the Saints of the Church of Jerusalem on 30 August 2008, and since then, his incorrupt body was transferred at the pilgrimage site of Saint Jacob’s Well where he found martyrdom for the love of Christ. His memory is honoured annually on November 29, especially in the community of Orounta with an all night church service. 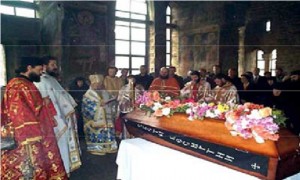 Monk Hariton, the New Martyr of Kosovo 7 November 2017 The Lord’s words, Fear not them which kill the body but are not able to kill the soul (Matt. 10:28) have inspired many generations of Christians over the past two thousand years, since the sacrificial cru­cifixion of our Redeemer and Savior Jesus Christ. Following these words, even our sinful yet cross-bearing people have produced many martyrs and ... 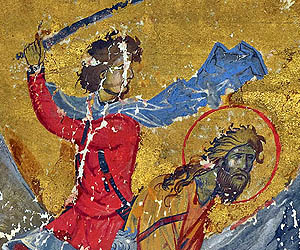 An Orthodox Christian Response to Beheading by Muslims 29 August 2017 Fr. John Parker I am an unworthy man, unworthy to be called an Orthodox Christian, not to speak of the priesthood, and I write, admittedly, from the comfort of my Mount Pleasant, SC, home. There is no Mount nearby, but it is, indeed, a pleasant seaside community on the East Coast of the United States. As such, I ask myself: how to deal with ruth... 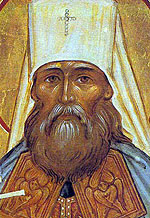 New Martyr Vladimir, Metropolitan of Kiev 25 January 2015 The holy Metropolitan Vladimir of Kiev was the first bishop to be tortured and slain by the Communists at the time of the Russian Revolution. Basil Nikephorovich Bogoyavlensky was born in the province of Tambov of pious parents on January 1, 1848. His father, a priest, was later murdered. The young Basil graduated from the Theological Academy in K... 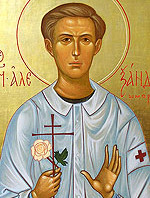 Alexander Schmorell, the New Martyr 13 July 2014 Alexander, the New Martyr from Munich: his memory is celebrated on 13 July, the anniversary of his death by beheading. At the age of 25 he was condemned to death by the Nazi regime, for “ultimate betrayal” Alexander Schmorell was the co-founder – along with his friend Hans Scholl – of the anti-Nazi resistance group the ‘White Rose’, which tried t... 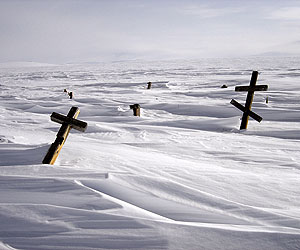 Father Arseny (1894-1975): The testimony of a Russian Confessor 22 June 2014 The political prisoners were all too well aware that each day that passed brought them closer to the inevitable end of their earthly lives. As if by some spontaneous reaction, they struggled desperately to keep their spirits alive, to combat the melancholy and depression, to avoid going mad… Piotr Andreyevich, later Father Arseny, was born in Mo...