The Holy Monastery of Simonos Petras

The monastery was founded in 1257 by the hermit St Simon, on the precipitous “Simonos petra”, or Simon’s rock. It was restored around 1368 by John Ugljesa, despot of Serres, but was destroyed by fire three times, in 1580,1622 and most recently in 1891. The katholikon, dedicated to the Nativity, must have been built around 1600. It was destroyed in the 1622 fire, was rebuilt immediately afterwards and frescoed in 1633. The church’s present form is the result of extensive restoration after the fire of 1891. Simonos Petras has jurisdiction over the Convent of the Annunciation at Ormylia in Halkidiki, one of the most outstanding convents in the Orthodox world.

The Holy Monastery of Iviron is dedicated to the Dormition of the Virgin 13 August 2021 The monastery was founded in 980 by the Iberian noble and distinguished general John Thornic, who essentially enlarged and renamed the old monastery of Clementos granted to him by the emperor Basil II. Of this earlier monastery’s only part of the katholikon seems to have survived, incorporated into the chapel of the Forerunner behind the present ka... 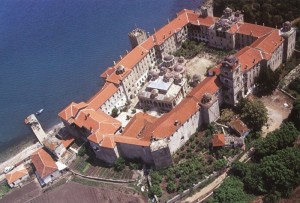