Tributes / Marriage
Metropolitan Jonah of All America and Canada (OCA)

The Discipline of Matrimony in the Orthodox Church 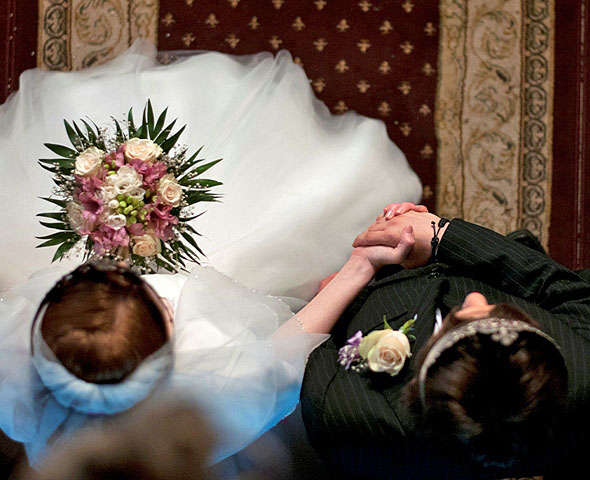 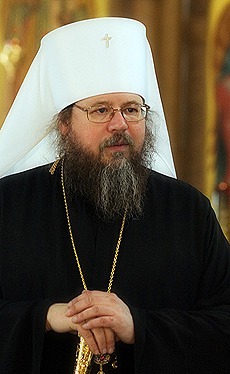 In the Orthodox Church the sacrament of Holy Matrimony is seen as an ascetic discipline. Matrimony is one of the two paths given and sanctified by the Church as a means of working out one’s salvation; the other is monasticism. Holy Matrimony is a mystical image of the union of Christ and the Church, and thus conveys the experience of being united in Christ to another person by the grace of the Holy Spirit, and thus, the life of the Kingdom of God.  Grace, which is the life of God poured out on creation, is nothing other than His Love. Marriage is an ascetic discipline because it has as one of its major purposes to bring people to maturity, emotional and spiritual, by teaching mutual self-renunciation and self-denial, in order to overcome selfishness. This goal of overcoming selfishness is the foundation of spiritual life and growth, and enables the couple to live in communion with God and one another. To overcome selfishness is to be able to authentically love and be loved.

It should go without saying that the Orthodox Church does not conceive of marriage other than between a man and a woman.

Unlike Western churches, there is no sense of marriage as a contractual agreement between the couple.  If there is a contractual element, it is in the Betrothal, and not seen as sacramental.  First a couple is betrothed, sometimes months or years before the actual wedding, sometimes as a short service immediately before the crowning. It is, however, seen as a legal bond of marriage, and the pair are bound to chastity until the Crowning. The Crowning is the sacramental sanctification of the Marriage, and takes the relationship into the Kingdom of God, revealing it as an icon of the Church.  It is blessed with crowns as an image of the mutual martyrdom to self for the sake of Christ that is required to transform the relationship between the two into a union of souls with Him.  It is fulfilled by the couple receiving communion together, as man and wife.

The service of the Crowning of a Marriage is a distinct sacrament, though sometimes occurring within the Eucharistic Liturgy.  From the text, it is a series of prayers for God to unite the couple to one another, citing all the marriages in the Old and New Testaments. One Protestant visitor to an Orthodox wedding said it’s like a Bible Study on marriage! God is the active party in the marriage, and the union is a union in Christ by the Holy Spirit with the Father, an image of the Kingdom, performed by the priest.  The Church prays that God will grant the couple many children and all the good things of the earth in order to share with those in need; and that they may live long and peaceful lives, and see their children’s children.  Truly it is a joyful thing!

Marriage is not the wedding ceremony, but the living out of the task to live in a union of love, and to grow in that love day by day, year by year.  The ascetic element begins with courting, but is an essential part of the discipline of being a married Orthodox Christian for one’s whole life.  Chastity is presumed, as a basic discipline of being an Orthodox Christian. The ideal is virginity until marriage.  A constant theme in the marriage service is “a chaste bed.” This of course does not mean no sex in marriage, but rather, the service is to bless the couple to come together in order to bear children.  This is the only context for the expression of sexual relations for Orthodox Christians.  It is a spiritual discipline to break down selfishness for a couple to be open to however many children God grants them. While the use of contraceptives is tolerated within the Orthodox Church, most spiritual elders forbid their use; it is up to the couple and their father confessor.  The point is to be open to children, and to multiply the love of the family.

The service blesses the couple to be fruitful and multiply, and to be blessed with all the good things of this earth.  It is not, however, a blessing to be greedy, but rather to acquire sufficient wealth in order to share with those in need. The goal is always Christian charity. And as it implies a multi-generation family, echoing the Scriptures, the elders must be cared for, as well as the children, so that they can rejoice in their children’s children.

Blessed Archimandrite Sophrony of Essex wrote that the spiritual life is about extending one’s personal “I” to embrace more and more people.  Thus, in marriage, a person’s “I”, his deep self, must include his wife, his children, their families in the bond of love. He or she cannot conceive of him or herself alone, but always in relation to the whole family.  For a monk, this love embraces the whole brotherhood, the whole region, and the whole people of God.  Of such are the saints. There is no such thing as individualism in Orthodox Christianity; the only thing done as an individual is to sin and that is what separates us from God and those around us. This corporate identity in love is the foundation of authentic personhood, always conceived in terms of relationship with others and in God. Marriage is thus far more than just a way of overcoming selfishness: it is the means for most people of attaining to authentic personhood, finding their true identity in Christ in the network of the love of their family.

Within marriage, there is one love that is exclusive: that of husband and wife. The love for the rest of the family, and beyond, is an inclusive love, which always is open to grow to include more and more people. Outside of marriage, exclusive loves are selfish.  In monasticism, there can be no exclusive love; but rather it is a broadly inclusive love that embraces everyone, in a spirit of chastity.  So also must be the way of life for those who are not married but in the world: to embrace and be embraced in a network of inclusive love, a context for the actualization of one’s personhood. Isolation is always seen as something negative; even the most distant hermits are not isolated, but remain within the love of the brethren.

In an Orthodox marriage, there is no “until death do us part.”  As marriage is a Mystery, a breaking into this world of the Kingdom of God, the union between husband and wife is wrought by God in the Kingdom, and endures forever. It is a type of the union of Christ and the Church.  Death cannot break that bond, as death has been overcome in Christ, whose love transcends the bounds of death.

The Orthodox Church is aware that not all human relationships work out; so also with marriage.  The Church tolerates divorce for four canonical reasons: unfaithfulness, abuse or attempted murder, insanity and monastic vows. Other reasons are not canonically acceptable. The ideal is of course to remain married, and simply work through whatever problems arise, without giving thought to ending the marriage. This is the context for spiritual growth. First and foremost is the need for mutual forgiveness, and to be committed to the marriage no matter what. If because of the above reasons, the relationship becomes broken with no hope of reconciliation, divorce and remarriage are tolerated, as a concession to the flesh and brokenness of the human condition.

Marriage in the Orthodox Church is a natural relationship transfigured and sanctified to become a means of salvation for those engaged in it.  Its crowning in church is not simply a ceremony celebrating the relationship, but filling that relationship with grace and raising it up to the Kingdom of God.  Even the times of conflict and disagreement that occur within the relationship become a means of overcoming self and letting love prevail, heal and reconcile, bringing about a deeper union.

“This mystery is profound, and I am saying that it refers to Christ and the church. However, let each one of you love his wife as himself, and let the wife see that she respects her husband” (Ephesians 5:32). 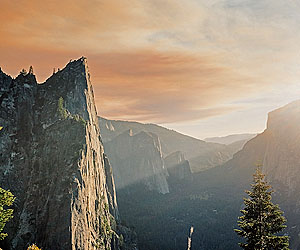 The Marriage of Love and Hate 12 January 2021 The genius of Dostoevsky lies in the profound theological insight of his tumbled novels. They can be difficult reads for many people – particularly in our modern setting. He has “too many characters” and they “talk a lot.” His characters are complex: I was a scoundrel, and yet, I loved God…  Good and evil are in a monstrous coexistence within ... 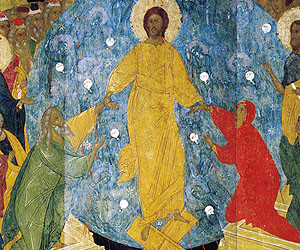 New Creation in Christ: How Jesus changed us and our marriages 19 April 2017 “If any man is in Christ, he is a new creation; the old things have passed away; behold new things have come.” We come to the Holy Gospel at last and to the Christian way of life! The fullness of time has come and God has sent forth His Son, our Lord Jesus Christ. How everything has changed! No aspect of human life remains as it was before Christ... 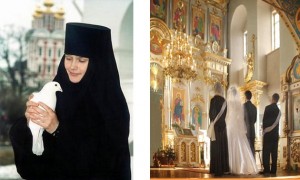 Marriage or Monasticism? 27 December 2016 Most young people don’t know how to discover their calling in the life. Whether to dedicate themselves to monasticism or select the marriage path. Some have the feeling that monasticism is a more superior choice than marriage and that marriage represents a lower situation. Others believe that any young man who chooses to become a monk is a coward w... 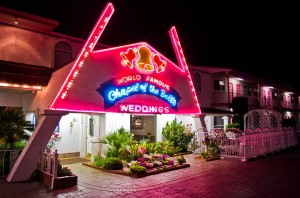 Marriage and Possible Alternatives: The Pursuit of Wholeness and Holiness* 7 September 2016 Vegas Wedding No apology is needed for the theme of the seminary’s 2004 Summer Institute: “Does Christian Marriage Have a Future?” Practically daily we hear in the media how “traditional” concepts and definitions of marriage are being challenged. In recent years the focus has been on same-sex marriage - legalized in Massachusetts in 2004 ... 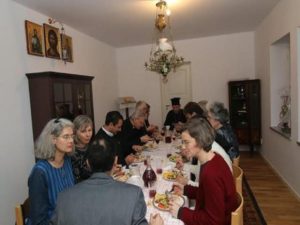 Family Upbringing at the Table 20 May 2016 The table is where the family gathers. Everyone’s there, sharing the day’s news, relaxing and exchanging views and experiences, all in connection with the consumption of a meal. Apart from the obvious, the whole process reinforces family ties and gives parents the opportunity to find out what their children really like. At the same time, it’s an e...