On the way to Holy and Great Synod

The media coverage was surely pleasing to the ROC with commentators often describing it as the “most powerful” Orthodox Church and other such misleading claims. This includes the impression that the meeting followed a 1,000-year separation despite the ROC only becoming independent from its Mother, Constantinople, in 1448 – but why let facts get in the way of a good headline. Needless to say, ROC officials did not correct the record; the Joint Declaration even referenced “the shared heritage of the Church of the first millennium” in spite of the fact that the ROC has minimal actual connection to it. Such statements may elevate the ROC in the minds of some, but they are disconnected from reality in the minds of most. 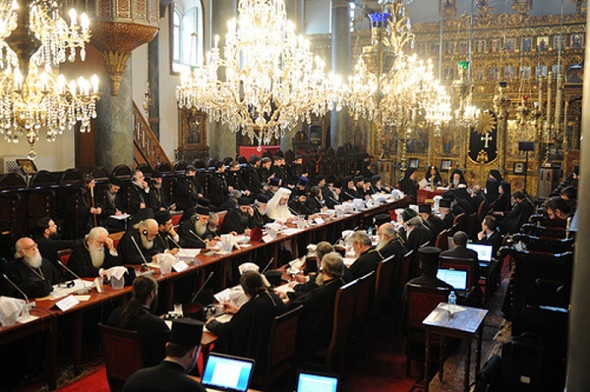 The meeting, according to insiders, was only made possible because the Kremlin (where Kirill was granted a residence in 2011) considered it in its own interest. President Vladimir Putin, according to the New York Times, “could have blocked the meeting but apparently concluded that it could burnish his global standing and undermine Western efforts to isolate Russia with sanctions over the Ukraine conflict.” This was more or less confirmed by Kirill who recently remarked that his meeting with Pope Francis could help lower the tension between Russia and NATO – as if Kirill is a servant in Putin’s political games.

As a side note, the Ecumenical Patriarchate, in a rare show of strategic social media use (an area where they can learn much from the ROC) used two Tweets to express its happiness with the Pope-Patriarch meeting (here), as well as silently show the leadership of Bartholomew (here).

Regardless of the rhetoric and jockeying for positioning in global Orthodoxy, any Constantinople-Moscow comparative discourse only serves to elevate the perception of the latter. In truth, Kirill is Patriarch of Moscow and All Russia; and Bartholomew is the Ecumenical Patriarch. Interestingly, though, the ROC, like the government of Turkey, avoids (or refuses) to use the word “Ecumenical” both for the Patriarch and his See, instead referring to it simply as the ‘Patriarchate of Constantinople’ in a sophomoric attempt to minimize this unassailable appellation from the seventh-century.

Florovsky, referencing V. V. Bolotov, writes that, “Church is ecclesia, an assembly, which is never adjourned.” This Orthodox ethos, its unbreakable bond with tradition (paradosis) and with the faith of the Apostles, is unique in Christendom. This relationship is a source of strength but when taken to an extreme, where the Church’s living tradition can no longer be nurtured, it becomes a weakness.

Orthodox spirituality and its Christ-centred mystical tradition as exemplified by the Hesychast Councils of the fourteenth-century have much to offer the world. The Holy and Great Council in Crete is an opportunity for the Church to emphasize its unity and articulate and proclaim a modern-day message that conforms to Apostolic Tradition but still relevant in today’s society.

The intra-Orthodox and inter-Christian dialogue will intensify before the 300 or so bishops from around the world gather in June. As His All-Holiness has remarked, “This is the moment of Orthodoxy.” It is incumbent upon church hierarchs to demonstrate the relevancy and richness of Orthodox Christianity and not be distracted by the dissenting wrangling promulgated by some.

St. John Chrysostom, who served as Archbishop of Constantinople, writes that, “The desire to rule is the mother of heresies.” Therefore, the assembled bishops in Crete should “avoid foolish and ignorant disputes, knowing that they generate strife” (2Timothy 2:23) and instead should preach the gospel so that all may be one in the Lord Jesus Christ (cf. John 17:20-23).