We weren’t created to die, but to live forever.

Love as ‘acconmodation’ in the body of Christ, in the ‘land of the living’ is an eschatological experience, the experience of the last things. The last things aren’t something that’s limited to the end, but they’re the ‘final’, the ‘unshakeable’ things [8]. Here, the end isn’t some historical time, but eternity, which isn’t limited in terms of time, but which penetrates and transcends time and history. It’s liberation from the exigencies of time and history. Love resurrects and liberates, whereas hatred subjects and vitiates.

God is love [9]. And each person has been created ‘in the image and likeness’ of the God of love. But the God of love is also just. He respects our freedom and doesn’t prioritize His power over us but His justice. So we remain free to accept communion with Him or to reject it. This is what He did in the beginning and what He has continued to do since the Fall, through the task of His salvation. According to Saint Gregory Palamas, this is the most excellent order which God maintains in His work. We are also called upon to observe this order in our life on earth, and we’ll retain it for ever when we acquire the power, in the time of our immortality [10]. 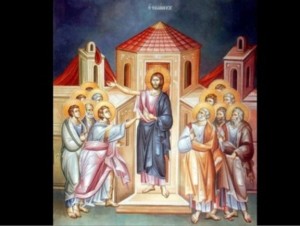 We weren’t created to die, but to live forever. This transient life is a pre-stage of the eternal one. And the state of affairs which we ourselves produce is a preparation for the condition we’ll find ourselves in in eternity. God doesn’t impose Himself imperiously on people. And His kingdom isn’t one of imperious authority, but of the love of the Almighty Lord and of freedom. But when we reject God’s gift, we short-circuit ourselves and are our own punishment. In this way, we’re introduced to eternal despair even in this fleeting life.

In his profound work On the Life in Christ, Saint Nikolaos Kavasilas writes that life in Christ is begun in this life and is completed in the next. And neither this life nor the next can be perfected in people’s souls unless the process starts from here. Just as there are bodily senses, such as sight and smell, so there are also spiritual senses. The present life is the workshop in which we prepare the spiritual senses. Those who don’t acquire spiritual senses here will remain ‘dead and wretched’ in eternity. God will be offered to all, as light, but they’ll be left in the dark, like the foolish virgins, because they won’t then be able to create eyes. And the fragrance of the Spirit will fill everything, but they won’t be able to acquire a sense of smell if it doesn’t already exist. People who haven’t acquired spiritual senses before they depart this present life won’t have anything in common in the next one, whereas the friends of God, with their spiritual senses, will participate, with Christ, in eternal bliss [11].

Pure spiritual senses, a pure heart, make us blessed and able to see God [12]. With Christ’s resurrection, which is the quintessence of the divine revelation, ‘everything has been filled with light’. This isn’t merely something that has to be believed, but something which can and must be experienced. Christ wasn’t the prophet of the resurrection and of the kingdom of God, He was their agent. He didn’t foretell things that would take place in the future, but brought these things into the present and made them shareable for everyone, up to a point, depending on each person’s purity and receptivity.  The Resurrection canon urges us: ‘Let us cleanse our senses and we shall see the unapproachable light of the resurrection’. The light of the resurrection is the light of the Kingdom of God, it’s the light of the age to come which exists and is revealed ‘in advance’ in the saints, even in this life.