Of course, the mystery of divine migration is different from any other migration and herein is certainly where its value lies, its creative contribution. In essence it is an offer in kind of the gift of a new ethos and completely new manner. In truth it is a voluntary migration, a voluntary exodus from the ‘existential security and certainty’ of an internal triune communion, a communion of love, towards the weak and sick, towards the naked and chastised[14]. I would say that this is a complete inversion and, as the same time reversion. An inversion of the everyday, but certainly not of the directly given as transmitted, where the migrant is the persecuted, forced by circumstances to change place and manner. And a reversion to the ancient beauty of a forgotten truth, a truth dismembered, which gives meaning to its existence by the light of the last days, which already alters our everyday routine, transforming habit into immediacy, where the exodus is not the result of unfree need and explosion of the freedom of a person who knows only how to love. And, one way or another, love is the removal of any certainty, any depressing permanence which imposes ontological immobility and begets death. 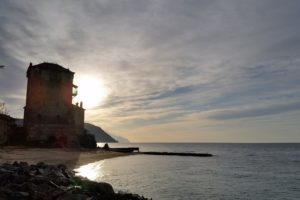 «The young man stood at the window […]  and looked out at the girl he loved. He was sad because he realized that there was nothing that would allow their union. Neither of them could leave their body. They couldn’t become birds, white doves, to soar from the balconies, to come together at the top of the cupola, with sanctified prayers’. And he goes on to say: between the two, a sky with a density of idea did not exist. Outside any communality, each of them gave vent to bitter cries of pain. Dreams, longings, love all wallowed in a bitter swamp of black pitch. Between the two, the world sank because of slight self-interest, yours and mine»[15].

I would say, then, without any reservation, that in a world that is anxiously seeking security and permanence, Christ, years before Ilya Prigogine, who introduced the scientific demise of certainty, brought and revealed as the sole truth a different ethos, another manner, that of insecurity and uncertainty. The open road of a permanent tightrope, a humble asceticism that reveals sanctity as a «measure shaken together and running over’.  The walk «by the sea-shore», where «the sea-breeze allowed» the young man in Pentzikis’ story «to have some, however, faint concept of the garment in which, having been baptized in Christ, he had put on a gift, so that he was comforted that he wasn’t wandering around entirely naked in the world. This was a beginning of certainty, that he could hope, despite the inroads made into his body by death»[16].

So here we have the incarnation which appears as an action of total respect, extreme affirmation by God towards people. The Word migrates as an act of love towards the object of His desire. He is united to it in deed and in truth. He takes on all the Other’s nature and becomes for them raiment and garment. He clothes their nakedness and slakes their thirst. And all of this in a unique manner.

[14]  See Cyril of Alexandria, On Genesis 5PG 69, 232AB: ‘Therefore the Word descended from heaven, abandoning the hearth of the Father. And He was a stranger in His own world, as John the wise testifies, saying: “He was in the world and the world was made by Him and the world did not know Him”’.