Saint Luke the Surgeon: Dealing with the betrayal of friends as Christians

Saint Luke bore bravely not only the death of his wife, his illnesses and his blindness but all the mocking, reproaches, false charges and slander, the absurd and never-ending interrogations, the persecutions, the exiles, the unjust imprisonments and the horrible tortures to which he was subjected by the people of the totalitarian state of his time. And all for the love of Christ, in the name of Christ. He kept his confession to the end, though it could have cost him his life. When they forced him to take down the icon of the Mother of God from the operating theatre, he stopped operating. He resumed only when her icon was back on the wall [3]. His internal spiritual state was also like this, which enabled him to bear all these excessive trials. He persisted because he was strengthened by divine Grace. He could say with Saint Paul: ‘Not me, but the Grace of God which is with me’ [4]. 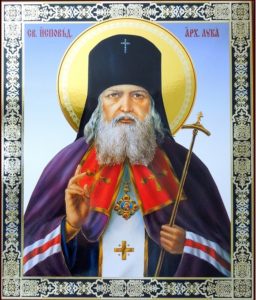 Saint Luke was also subjected to the sorrow, the bitterness, of betrayal by his own friends and colleagues who gave false testimony against him, including the fact the was supposedly an ‘agent of foreign powers hostile to the Soviet state’ [5]. His friends turned into his accusers. ‘But Bishop Luke proved stronger and more unshakeable. He never testified against anyone, despite the horrible tortures and terrible psychological pressure. And not only that. He even justified what these people did, stressing that none of his accusers believed what they said’. This came from his loving heart, because he observed Christ’s commandment to love even our enemies.

With this experience, through the sorrows and persecutions he suffered, he formed his own particular teaching on the meaning of trials in people’s life. We can hear him talking to us through his sermons and his letters.

Saint Luke says: ‘It’s only by following sorrows, the way of sorrows, that we can save our souls. And our own age is a time of sorrows, great trials. So it’s a welcome time and all we need to do to save our souls is to endure the sorrows. That’s the path of true Christians’ [6]. He reminds us of Saint Anthony the Great who said ‘if you take away temptations, no-one will be saved’ [7]. In this passage from Saint Anthony, the meaning of temptations is exactly the same as sorrows or trials.

Saint Luke emphasizes that ‘it’s very important for every Christian to realize that our sorrows are all sent in accordance with God’s will, which is always good and redemptive. Most often, in fact they’re sent not as punishments for our sins but to set aright our path and our hearts or as the answer to a request we’ve made of God. People often expect God to give them what they’ve asked for in their prayers in the way that they themselves think is best. But God often answers their supplications in a way that’s entirely different from what they’d wanted or imagined. They might ask, for example, for God to grant them humility, imagining that slowly, day by day, it’ll grow in their heart through the beneficent influence of God. But the Lord often does things differently: He’ll send them an unexpected, harsh blow that wounds their pride and egotism and humbles them. The Lord will often send us an illness and we complain and don’t think that most often this is a great blessing from God. It may be God’s answer to prayers in which we’ve asked Him to strengthen our faith.

We have to accept all the trials and sorrows that God sends us with great humility and without the slightest complaint, in the humble conviction that, through them, God is guiding us, rather than that His wrath has come upon us. There’s no wrath in God. “God is love” [8]. And perfect love is a stranger to any form of injustice’ [9].