On seeing Fr. Symeon, in person you weren’t impressed by his appearance. He was an ordinary clergyman and he himself cared nothing for anything more. Often, indeed very often, he would stress that he was a ‘non-being’, clearly referring to the phrase used by Saint Paul in I Corinthians (1, 28), where he talks about ‘things which are not’. And he believed this deeply and demonstrated it by his behaviour. Although he had a great many spiritual children, he never said of anyone ‘He or she’s my spiritual child’. He rejected the title of ‘Elder’. Some professors went to see him once with a group of students, in the first few years after the monastery had been built. One of the professors addressed him as ‘Elder’ at some point in the conversation. Feigning surprise, he asked: ‘Who’s the Elder’. ‘Your Reverence’, answered the professor with a bow. Fr. Symeon didn’t say anything but he fixed him with a look which indicated that he didn’t care for the title. And yet he was an Elder. Even though he didn’t like it and preferred the simple ‘Father’, I imagine that he would permit me, now, in this text, to call him by the word which renders he actually was in reality. 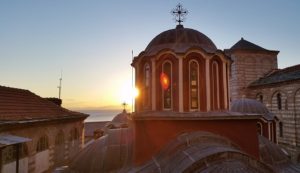 He rejected any form of excessive respect for him as a person. There’s a great danger of the relationship with one’s spiritual guide descending into hero-worship. Lots of ‘Elders’ cultivate this and allow it or, at least, indulge it. Father Symeon did not attract people to himself personally; he was simply the ‘groomsman’: he brought people to the Bridegroom.

He held this position in both the communities he founded, one for monks, the other for nuns. In reality, he didn’t found these communities. The brothers and sisters were sent to him by the Bridegroom. He never advertised, never proselytized. He told me that many souls expressed to him their desire to become monastics, and that, with the slightest encouragement, he could have brought them to monasticism. But he didn’t even do that. Every one of the monks and nuns came to him entirely of their own free will, without any outside influence. He didn’t speak to their souls, he let God do that.

Essentially it was God Who ran his life. He himself never planned anything, which might seem lackadaisical to ordinary people. But Father Symeon was no ordinary man. His plans were made without ‘his own will’; he submitted everything to God. He surrendered everything to the Grace of God. He made no timetables. ‘Leave it for God to decide’, he’d say.

But he didn’t wait for God to decide fatalistically. As a man of prayer, he sought enlightenment from God. Very often, when I needed his opinion or advice about something, he’d tell me: ‘Let’s leave it to see what God will say’, meaning that he’d find the answer in his prayers.

He often visited the Holy Mountain and many’s the time he invited me to accompany him. Once we went only for one day, to the Monastery of Doheiariou, to venerate the icon of the Mother of God Quick to Hear. It seems that he needed a swift answer to some request of his! In general, as a real monk, he loved monasteries. I’ll always remember our visits to the Monastery of the Honourable Forerunner on Skopelos and the Monastery of Zorouva on Ydra.

There on Ydra we were present at the baptism of a Spanish couple by the late Metropolitan Ioerotheos of Ydra. It took place during the Holy Liturgy, during which Father Symeon refused to give a homily and insisted the I speak instead. In the end, I did as I was told, even though I believe that the congregation would have benefited much more had Father Symeon spoken.

In order to house his children, he bought an old chicken farm and gradually turned it into a monastery. When he showed me the plans for the church I told him it was too small. ‘It’s all right for the present congregation, but more and more people are coming. What’ll you do in a few years’ time?’ He agreed and made the church bigger, but even that was too small in the end and it had to be extended.