People should cultivate their soul, in order to be like their Creator

A good analysis of these efforts on the part of the emperors is presented graphically by Gerard Walter in his book La vie quotidienne a Byzance au siècle des Comnènes (1081-1180) [Daily Life in Byzantium in the Komninon century]. Writing about the privileged classes, among whom were the nobility, he says that the rich in Byzantium were called the magnates and were prominent among the military leaders and the administrative class. The administrators were also land-holders who ran the Empire and would often buy parcels of land in their provinces. The rich land-holders also aspired to an administrative position in order to enjoy the title associated with it. So civil servants were also land-holders, that is they ran the administration and also owned stretches of land. At the beginning of the 10th century, the wealth of the magnates had reached its height and emperors sought to restrict it from further growth. 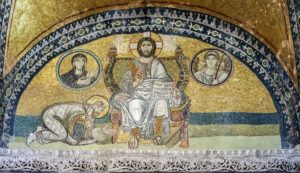 By a novella (law) published in April. 922, Romanso I Lekapinos aimed to restrict the expropriation of the property of the poor by the magnates. According to this law, if any poor person wished to sell off his property, he had first to offer it to members of his family and then to his neighbours. Only if they were not interested could he then sell it to the magnates. There were, however, great difficulties as regards the implementation of this law and its shortcomings soon became obvious, because at the same time there was the institution of the long lease, according to which the magnates were able to rent a piece of land from the poor, violate the terms and then be sure of the support of the courts if the owners had recourse to justice. In other words, there was collusion between the magnates and the judges. Apart from this, agricultural production suffered greatly between 927 and 928, which meant that the relatives or neighbours of the poor, starving seller were unable to take advantage of the opportunity offered by the law. As a result, the magnates were able to buy the land of the poor at a low price, giving them foodstuffs as a down payment.

Given the failure of this law, the same emperor published another novella a few years later, in 934, in which he ordered the rich to return, under certain conditions, the land which owners had been forced to sell through necessity. The introduction to this novella is striking:

‘People should cultivate their soul, in order to be like their Creator. Those who ignore this duty are doomed to become slaves of their passions. It is from this that the infinite injustices spring, from this the great and eternal wretchedness of the poor, their endless groaning, the sound of which alerts the Lord. If God Himself moves to avenge their pain, how can we ignore their complaints?

When we act in this way, we are not activated by hatred or envy of the magnates, but by our love for the poor, by our intention to protect them, and by our desire to save the empire, because those to whom Divine Providence has given power and wealth do not take care of the poor, but rather see them as prey and are reluctant to refrain from seizing their lands immediately’.