It’s often been observed that some nuns find it difficult to express certain troubling thoughts to the Abbess, and that they find it easier to do so to the Elder. Of course, it’s obligatory for the Abbess to agree to hear the thoughts of all the nuns, but in such a case we see that the Elder can be of help in the resolving the situation to the spiritual benefit of the nun concerned.

Besides, the Elder is more easily able to reconcile and placate the nuns regarding any friction or pettiness which disturbs the interpersonal communion of the nuns, especially when certain passions are prevalent which tend to appear more often in the feminine nature, such as envy, jealousy, complaining and disparagement. In other words, the Elder has this advantage not only from a spiritual, but also a psychological and biological point of view.

In recent times, many devout but inexperienced priest monks and even married priests have had women gather round them who have wanted to enter the monastic life and so these men have undertaken to found a monastery and to guide the new nuns. Their aim may be worthy. But such a task should be undertaken in the proper, traditional way. The Orthodox monastic tradition tells us that an Elder must perform this service selflessly and be, at the same time a teacher, an experienced doctor and overseer of souls, a good shepherd, and a much-wanted father for the persons who have been entrusted to him. Women’s monasteries which have had the support of such Elders have known spiritual progress and vitality, and continue to do so. 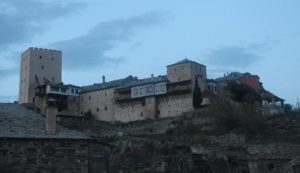 We might mention typical instances of such saintly Elders who either founded or were associated with women’s monasteries and whose lives are described in the book Γέροντες και γυναικείος μοναχισμός (Elders and Women’s Monasticism) by Hieromonk Fr. Dimitrios Kavvadias, which we’re presenting this evening.

Saint Yerasimos the New on Kefallinia, who lived for quite a long time on the Holy Mountain founded what was, for the time, a pioneering women’s coenobium, the ‘New Jerusalem’, at Omala, Kefallinia. Saint Anthimos in Kefallinia founded six monasteries, of which three were women’s: Ayia Paraskevi in Lepeda, Kefallinia, Our Lady the Portaïtissa (Gatekeeper) on Astypalaia and the Live-Receiving Spring in Sikinos. Saint Pachomios Arelas, the elder of Saint Nektarios and of Saint Anthimos in Chios founded the Convent of Saint Constantine. Saint Nektarios of Pentapolis, the saint of the 20th century, founded the women’s monastery of the Holy Trinity on Aegina, on the model of the Convent on Chios. Elder Daniïl Katounakiotis was the spiritual guide of Abbess Theodosia and, with her, all the nuns of the Monastery of Kekhrovouni on Tinos. Saint Anthimos of Chios founded the Convent of Our Lady our Help in Frangomahalas. Saint Savvas in Kalymnos became the Elder of the Holy Monastery of All Saints on Kalymnos. Elder Amfilohios Makris founded the women’s monasteries of the Annunciation, ‘Beloved Mother’, on Patmos, the Eleousa (Merciful) on Kalymnos, the Annunciation on Ikaria and Saint Minas on Aegina. Elder Filotheos Zervakos founded two women’s monasteries on Paros, the Myrtidiotissa, Thapsana and Saint Filotheos. Elder Ieronymos Simonopetritis, who lived for many years at the dependency of the Ascension in Vyrona, Attica, tonsured and guided hundreds of nuns. Elder Iosif the Hesychast sent many nuns to women’s monasteries and guided them either in person or by letter. Saint George Karslidis founded the Holy Monastery of the Ascension at Sipsa. Elder Kornilios Marmarinos directed the women’s Monastery of the Protecting Veil at Halkios, Chios. Elder Athanasios Hamakiotis founded the monastery of the Faneromeni (Our Lady made Manifest) in Rodopolis. Saint Porfyrios Kavsokalyvitis founded the Monastery of the Transfiguration at Milesi and directed the spiritual life of many nuns. Saint Païsios the Athonite was linked to the nuns at the Monastery of Saint John the Theologian at Souroti and guided their spiritual lives. Elder Efsevios Yannakakis founded two women’s monasteries, the Entry of the Mother of God in Markopoulos, Attica, and Saint John the Theologian at Verino, on Aigio. Elder Mitrofanis directed the spiritual life of the monasteries of Our Lady Rovelista and the Lower Mother of God in Arta, as well as the Life-Receiving Spring at Areia in Nafplio. Elder Damaskinos directed the Holy Monastery Saint John at Makryno, in Megara. Elder Polykarpos founded the Monastery of Saint John the Theologian at Souroti and the Monastery ‘Our Lady of Evros’ in Alexandroupolis.

Of course, there were also many other Elders, but the sheer size of the volume has made it impossible to include their biographies. There are also some who are still alive but who are recognized by the complement of the Church as charismatic Elders who have founded and guided the spiritual life of women’s monasteries, such as Elder Nektarios Marmarinos, Elder Aimilianos Simonopetritis, Elder Efraim in Arizona, Elder Filotheos Karakallinos, Metropolitan Athanasios of Lemesos, Elder Alexios Xenofontinos and many others.

We would like to thank Fr. Dimitrios for having the inspiration to publish this work and for the great efforts he made to gather information on the elders, abbesses and nuns whose life he’s described, as well as the details about their monasteries. Fr. Dimitrios was weaned in a women’s monastery, the Holy Monastery of Saint John the Theologian, Papagou in Athens and brought up there. His first spiritual experiences and his desire for the monastic devotion were linked to this monastery from an early age. Thereafter, when he himself became a monk and a priest, he served in women’s monasteries, wrote about women’s monasticism and supported it, which is why he’s so familiar with this sphere and has retained so many interesting stories about many blessed, virtuous nuns.

We hope there’ll be a dynamic continuation of the traditional position of the Elder within modern, women’s, Orthodox monasticism and pray that all the Elders and Abbesses will be enlightened and fortified by the Lord so that they can carry out the elevated and selfless task which has been assigned to them by Divine Providence. For the nuns, we pray that they may observe their monastic vows punctiliously, so that they can make their way towards sanctification unfalteringly and in safety and can experience Christ the Bridegroom ‘dwelling and walking within their hearts’. Amen