With their virtuous lives and their spoken and written words, charismatic elders, such as Iosif the Hesychast with his disciples, Saint Païsios the Athonite, Saint Silouan the Athonite, and Elder Sophrony attracted many young men to Athonite monasticism and contributed to its revival in this way. The same happened with women’s monasticism, with virtuous Abbesses such as Makrina in Portaria and Akylina in Sipsa, whom our late Elder Iosif Vatopaidinos called the ‘Abbesses of Abbesses’. These became examples of the monastic life and their monasteries models of coenobia, workshops of virtue and antechambers of Paradise. 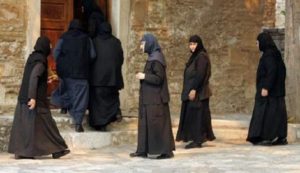 There may be many people who don’t know the monastic tradition well and may be surprised when they hear of the position of an Elder in a women’s monastery. But experience has shown that the progress of any women’s monastery is mainly due to the presence of an experienced Elder. Of course, the Abbess is the mother and reference point for the nuns. The Elder, however, is the experienced guide on the difficult path of the monastic life, both for the nuns and the Abbess. It is he who ensures the best relationship between the Abbess and those obedient to her and is a guarantor of success on the road to serenity and salvation. This is so, of course, provided the Elder has himself first lived under obedience and has acquired experience of the sorrows and trials of the monastic life, and also the visitations of divine Grace. The Elder must have lived monasticism ‘as continuous violence against nature’ and have tasted that which is beyond nature.

Whether he founded the sisterhood or is the guide, the Elder is a living icon of Christ for them, he’s ‘in the model and place of Christ’. Without wishing to impose, or to undermine the Abbess of the monastery, he makes a major contribution to the peaceful co-existence of the sisterhood, in obedience, and to its general progress. He provides teaching from the wealth of his own personal experience in the monastic life. His discourse should inspire the nuns and should be empirical, catechetical, admonishing, consoling, comforting, healing, discerning and, sometimes, whenever necessary, chastening. All the nuns in the monastery must feel comfortable when they confess, as of course, should the Abbess, too. They can tell him their pain, the errors, their sins, their passions, and also their desire for Christ. Through the sacrament of confession, the Elder forgives their sins, but also explains the machinations of the cunning enemy. He encourages them in the ‘good struggle’ and confirms their progress in the life in Christ.

He will often be understanding or will empty himself in order to adapt to their capacities, to take on their burden. In general, he suffers and rejoices with each nun and the whole community. He becomes the spring from which divine Grace flows for each nun and the whole sisterhood. And in this way, he’s established by the Grace of God as a real spiritual father.