The connection between Christian Life and Political action

We can see in this preamble to the law on the correction of social injustice that it has a theological basis. It refers to the passions which sway people when they distance themselves from God and which spur them on to increase their own wealth and the injustices heaped upon the poor. It also states that the adoption of laws to support social justice is motivated by love, is in accordance with Divine Providence, and that the survival of the empire is involved. It is apparent, then, that the emperors were not moved by some ideological social model, but by the theology of the Church. This law also failed to achieve the expected results.

Thereafter Konstantinos VI Porfyroyennitos (Porphyrogenitus) passed a law which envisaged the immediate return, without compensation, of all lands purchased by the magnates. from small-holders from the beginning of his reign. 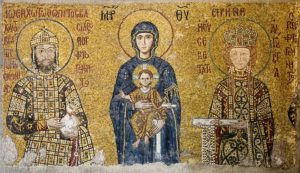 Twenty years later, the emperor Nikiforos Fokas published a law which allowed the magnates to purchase land, not from the poor, however, but from other members of their own social class. This was a way of protecting the poor from pressure by the magnates.

Vasileios II followed the same tactic. He abolished the limitation period of forty years which had been in place for claims for the return of lands expropriated after the famine of 927. He also ordered the restitution to the unfortunate sellers or their descendants of all those lands, with no right for the magnates to have recourse to the law to claim their money back or compensation for any improvements they may have made.  He added: ‘They don’t deserve to get anything back and, in fact, should probably be punished’.

This is what the Christian Roman emperors did to rein in the avarice of the magnates/rich landholders and to protect the poor. Would that this were a model for todays heads of states, particularly those supposedly Christian states, to confront the crises affecting our society. Today, the magnates are the rich and powerful, those who have enormous wealth and are continually increasing it at the expense of the weak. This is why those responsible for the economy should not merely apply economic systems which are in force today, but should learn from the charitable methods with which our forebears dealt with these issues. As we’ve seen, the novellae of the emperors weren’t the product of some social system or ideology, liberal or social, but the fruit and expression of theology. When we solve social issues by means of theology, then the manner in which we do so is philanthropic, since it retains both love and freedom.