The medicine against the passion for primacy

Christ applied the balm of humility to the wound of ambition, the desire for pre-eminence.

If the ‘messenger of great counsel’, that is Christ, was so humbled, then we, too, should be prepared to follow the same path. ‘He humbled himself by becoming obedient to the point of death, even death on a cross’, as Saint Paul emphatically stated. The higher people rise, the more they should humble themselves and not be proud. Authority has been given to them not for them to be domineering, but to serve others. Saint John of the Ladder says: ‘Not only to cut, but also to take care of the wounds of others. It’s only through humility that leaders acquire a natural mode of behaviour towards others. We’ve made an agreement with God involving repentance, not authority’. 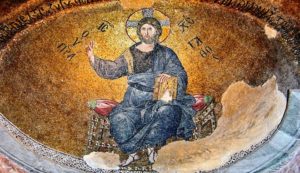 The behaviour of leaders today.

Today, those who are leaders of nations and all those who have some kind of authority are in danger of falling into the sin of wanting pride of place and domination of others. We all want to lord it over other people. Military commanders, men, women, clergy and lay people, political leaders and everyone else who has some form of authority are in danger of becoming tyrants towards others. Real leaders don’t just open wounds, but take care of the injury. Authority should be exercised with humility if it’s to be effective. Our example is Christ, Who was greatly humbled, in order for us to be raised to heaven. He is the sure way of authority. Humility is the medicine against pushing to be first.