The presence of Christ at the wedding in Cana

The theological approaches to the excerpt are very interesting, but what should attract our attention is the link between the reading and the wedding service. On the basis of what has been said so far, can we make the following observations?

1. The presence of Christ at the wedding, renews the past, without extinguishing it: the miracle is performed with pre-existing material, water (an observation from as early as Irinaios). In other words, the old, pre-marriage person is renewed in a fresh relationship with their spouse. The love which already exists for a natural reason between the partners is sanctified by the Church and increased. It prays that ‘perfect love may be sent down upon them’. 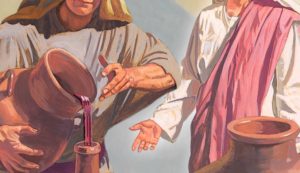 2. Marriage is nourished, maintained and expanded not through the observation of religious practices such as the purifications of the Jews, but by active participation in the body of Christ through the Divine Eucharist. The observation and retention of certain traditional religious customs on the part of the couple has meaning only insofar as it’s incorporated into their active participation in the life of the Church.

In the Gospel reading, the presence of Christ at the wedding denotes the beginning of a new era for humankind, which is an age of joy and gladness. Human nature is affirmed, the water of formal religion is transformed into the wine of real hope for the future and also for the present. And the prayers of the marriage service don’t forget our material nature, which is why they ask God to ‘give them of the dew of heaven from above and of the riches of the earth… give them fruit of the womb, beautiful children and harmony of souls and bodies’.

In the Epistle reading the ‘sign’ in John takes on Christological and ecclesiological dimensions. Marriage is a ‘great mystery’, which is incorporated into the relationship between Christ and the Church. Love and obedience, while retaining their human character, are given meaning by the Christ-Church relationship, as well as that of Church-Christ.

(Part of a paper which was read at the 4th Panhellenic Liturgical Symposium of Members of the Administration of Holy Metropoles on the subject of ‘Marriage in the Orthodox Church’. The Symposium was organized by the Special Synodical Commission on Liturgical Renewal, in Prokopi, Evia (3-6 November, 2002)

See the comparison in Irinaios, Against Heresies III, 17, 7. Cyril of Jerusalem, Catacheses IV, 2.