“We Orthodox can’t get away with fooling around…”

Now we can tell you something both comforting and hard.

Our position is both privileged and dangerous. It’s been defined by those who gave birth to us and we can’t just do as we please.

We Orthodox can’t get away with fooling around, no matter what justification we find for ourselves. Much less can we be brazen.

If those who went before us had lived and died in a happy-go-lucky manner, doing whatever they felt like, then we would be entitled to do the same. But they lived differently.

[…] Had they not built the Church of Holy Wisdom [Ayia Sophia] as they did, to embrace every person and the whole world.

Had they not made the Holy Mountain as they did, to save everyone and for nations to live in brotherhood.

Had Saint Gregory Palamas not theologized as he did, recapitulating the experience and life of Orthodoxy, slaking the thirst of young people today. 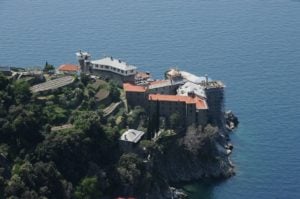 If so many unknown people hadn’t striven, wept, forborne, prayed and sacrificed themselves, If, in their songs, in their lives, in their moral values they hadn’t had that humanity that cuts right through you.

[…]  If all this were not in our blood, we could do whatever we like.

But that’s not the way it is. We can’t act irresponsibly. We don’t belong to ourselves. We belong to those who gave birth to us and to the whole world. We’ve been charged with a spiritual legacy. No justification will save us. No matter what we get rid of in our schools, we won’t be able to justify ourselves to anyone, to be be free of our duty, nor can we forget it. We can’t put together any sort of alibi. We’ll have to face those who went before us and those who are coming after.

They’ll throw our artificial achievements right back in our faces. Because at some stage, these young people will wake up, they’ll refute the lies, the irresponsibility, the misrepresentation, the sham, the betrayal which is being foisted on them in a criminal and bullying manner.

And those who resist will find they have unexpected powers which will surpass those which they themselves possess. They will have alongside them the spirits of the departed and the expectant children of the whole world.

What we’ve inherited defines our behaviour: the Truth, Who became incarnate through the All-Spotless and Ever-Virgian Mary, Who died and rose raising the whole world with him and established the Church, the Body of Christ; Grace, which sanctifies the whole of a person’s being; the Church, which baptizes the whole person in the bottomless depths of the mystery of the life of the Father and of the Son and of the Holy Spirit, which hallows all the senses.

The whole of the spiritual body of our lives contains messages which belong to all of us, which all of us are waiting for, in the four corners of the world. And we’re in debt to everyone. Those who gave birth to us in the flesh and in the spirit have placed us on a particular level. We can’t simply lower the flag, write off our debt, or find repose as and where we want. We can do so only on the cross of sacrifice.