Teaching plan for the life of Saint Nicholas in pre-school

Our greek orthodox people have connected the weather change of winter time with the orthodox church’s almanac, as they do with every season of the year. So, according to the folk tradition, winter officially begins with the so- called “Nikolobarbara”. (4-6th December). In modern greek history, Saint Barbara’s and Saint Nikolaos’ celebrations are connected to the Greek Army, since these are correspondently the celebration dates of the Greek Artillery and the Navy. Meanwhile, the dates of 4th, 5th and 6th December create a “triangle”, which corresponds to the celebrations of Saint Barbara, Saint Savvas and Saint Nikolaos. This triangle was named “Nikolobarbara” by the people. In the Peloponnese, many people associate this “triangle” with death, because of the bad weather conditions that usually prevail these particular days. In fact, many people say that “Saint Barbara strengthens (the cold), Saint Savvas enshrouds, and Saint Nikolaos buries”. 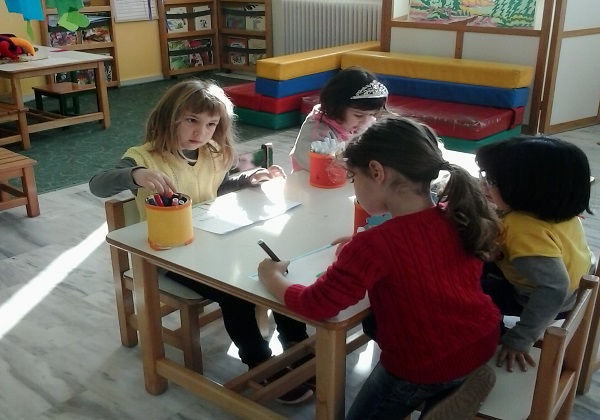 At this point it is important to be mentioned that on 4th December, we celebrate the honor of Barbara the Martyr, who is the protector of the Artillery, of firework constructors, of infectious diseases (mainly variola), of pregnant women, of the imprisoned, of the cooks, of the coppersmiths and of the bell- constructors. On 5th December we honor Blessed Savvas the holy one, who had the charisma of working miracles and made use of it in order to help the poor and the sick. This renowned “triangle” is complete with Saint Nikolaos on 6th December. Saint Nikolaos was a leader of the people and he helped them, both spiritually and financially, and he was distinguished for his charisma of working miracles. As it has already been mentioned, Saint Nikolaos is the protector of Navy and the Coast Guard, protector of the seamen in general and he miraculously intervenes to protect those who are in danger because of natural destructions and bad weather conditions. He also helps orphan children and the poor.

Some traditional folk proverbs about the “Nikolobarbara” are the following ones; “Nicolitsi, Barbaritsi, Sabba what did you want in the middle?”, “From the Nikolobarbara days the winter begins!”, “At Saint Nikolobarbara’s days even the walls are ripped!”, “Little Nikolaos, little Barbara, winter is in front of us”. “During Saint Nikolobarbara’s there’s rain and snow” (http://www.defencenet.gr/defence/item).

Here you can see the methodological approach that was followed for the teaching’s conduct. More precisely, the teaching forms and principles are presented, as well as the space in which the activities were conducted.

Now, we present you the analytical teaching plan that was followed so that we perform the teaching process on “Saint Nikolaos” subject. The following teaching plan analytically includes the activities that were performed, as well as the goals that were set from the Cross-curricular Single Context of Study Programs for Kindergarten (DEPPS).

You can see the teaching plan here

Annex 3: Adapted story for the kindergarten
“Many years ago in land far away, a boy was born. His name was Nikolaos. His parents were very rich and took very good care of him because he was their only child. Ever since he was young, Nikolaos believed in God. In fact, he refused to drink milk like the others every Wednesday and Friday as he didn’t think this was correct. Nikolaos was very well- educated. When he was 23 years old, he became a priest. After this, he decided to make a long journey and live alone, far away from the rest of the people. While preparing to make this journey, an angel appeared in front of him (a vision) and told him that God does not want him to make this journey, but he wants him to go back. Nikolaos obeyed and he returned. When he was 31 years old, he became a very powerful priest and he was able to protect the people. He protected and cared about the poor. He built hospitals and other places where the poor people could live in and eat. Later, some people who did not believe in God wanted to harm Nikolaos and they tortured him. But he loved God so much that he could stand the pain. After a while they stopped torturing him because they now had a new king, and this king loved Nikolaos. So, Nikolaos became again the powerful priest he used to be, and he kept on taking care of the poor and of the people who had nowhere to live in. When he got very old, he was taken to heaven by angels. Saint Nikolaos worked many miracles while he was alive and after his death. When the people were in danger or when they got sick, Saint Nikolaos appeared in front of them and he saved them. Once, some people who lived in a city had nothing to eat. He appeared in front of the captain of a ship and he told him to bring wheat to those people to eat. Nikolaos also helped a lot of ships that were about to sink. Once, a ship was about to sink because of a sudden storm. Then, Nikolaos appeared, he grabbed the ships wheel and he guided it. So, the ship was not sunk and the people inside were saved. Another time, there was a man travelling by ship, when he fell in the deep sea. He asked for Saint Nikolaos’ help, and he appeared and took him to his house. Saint Nikolaos usually appears to people in a cloud. This is called a vision. So, all the people knew that they had an angel in heaven, who would never let them get harmed”.

Annex 4: Language Development from the narration of the Story

Nikolaos: The name Nikolaos is a christian man’s name. It is a compound word: victory (niki) + people (laos) = the one who gives victory to the people.
Vision: a picture that somebody sees with their imagination, so it is not real. The people who see it consider it to be a “sign” of God and they build their lives based on this “sign”. The Saints sometimes appeared in visions when they wanted to help or warn a person.
Ship: It is a big sea vessel that carries many passengers for a long time. The ships are constructed to travel safely in the sea. The ships can be war ship or merchant ship. The war ships are the ships that protect our country, while the merchantmen are for the people’s traveling. There are also passenger ship and cargo ship. Passenger ship carry people and cargo ship carry cars.
Heavy sea : (in greek) this word includes the word “wave” inside. It is about the waves and the sea. When the sea is angry and there are huge waves, then we have a heavy sea. The ships that travel in a heavy sea are in danger of sinking. 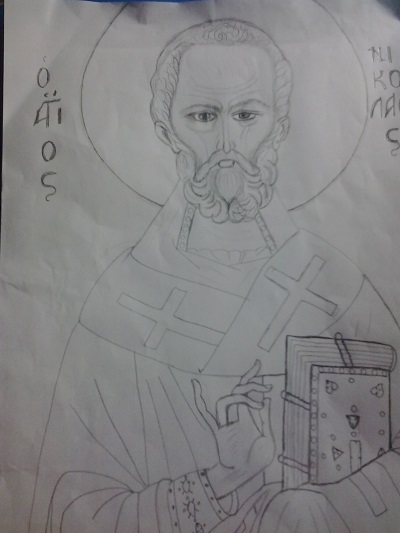