The Canaanite woman and the Mother of God

Today’s Gospel is about a Canaanite woman. You heard how she called out to the Lord, followed Him, and was ignored by Him. His disciples were at a loss to understand why He didn’t either help her or tell her to go away, instead of leaving her to plead. He explained His silence: ‘I came only for Israel, not for foreigners, for the Gentiles, such as this Canaanite’. But the woman persisted, approached Him and asked for His assistance. The Lord’s answer was a lesson to her, to His disciples and to all of us ever since then. He said harshly: ‘It’s not right to take the food out of the mouth of your children and to give it to the dogs’. He compared God’s blessing with the most basic human need: food. But the woman didn’t give up. She answered back: ‘Yes, Lord, but even the dogs eat the crumbs which fall from their masters’ table’. Christ then told her: ‘Woman, your faith is great, so I’m granting you your wish’.

Let’s dwell on this a little. The Lord had left Judaea and was on His way to Sidon, in the Lebanon. This was the land of the Canaanites, a nation which had been living in the region even before the Israelites came from Egypt with Moses. They worshipped idols and their women practiced magic. 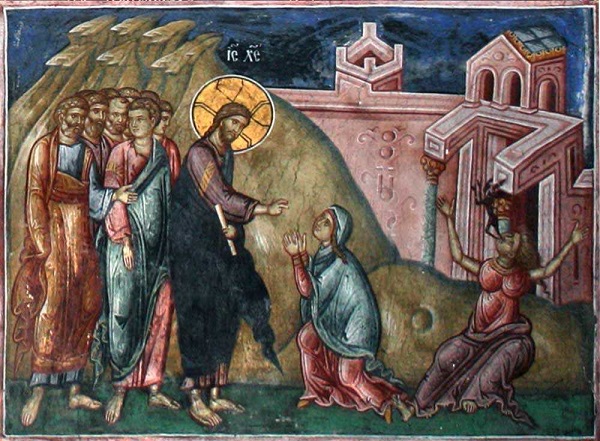 So while it was true that Christ went to their land, the woman herself had to want to see Him, to call to Him from the depths of her soul. She felt His presence beside her and started calling to Him. She wasn’t calling to some enchanter, to some magician who worked ‘miracles’. She called to Him in His own specific capacity, in a sense by His own name: ‘Son of David’, the Lord. And the more she calls out to Him, the closer she gets; the more she seeks, the more she finds. At first, the Lord doesn’t even speak to her, which is a severe test of her faith. He lets her follow on behind, without any response, and when he does reply it’s with harsh words. Obviously, there’s no question here of any racial prejudice. Christ was talking about idolatry and magic. But we see that the faith of the Canaanite woman isn’t shaken at all by the comparison. She continues to ask for mercy and for His intervention in her life and that of her daughter.

What are the cries of the Canaanite woman if not a prayer to the Lord? What is her pursuit of Him if not a pivotal point in her life where she turns to His word? Her humility, her acceptance of the fact that, yes, she was an unworthy dog who was asking only for a few crumbs as a blessing, only what was left over from the table of the masters, what is that if not repentance and confession? And the final answer of the Lord is nothing other than His open embrace, God’s acquiescence in the face of unshakeable faith.

The Church is the mystical locus where we all meet. Here are the Lord, the angels, the saints and the faithful. And here also, drawing us to her with great love, is the lady of this house, the Mother of God.

The Mother of God laboured long for God to open His embrace to the Canaanite woman and to all of us. Mary wasn’t simply a pious girl who participated in our salvation in a passive way by accepting God’s will, when she spoke to the angel. It’s not like when God took earth and made humankind, without us doing anything ourselves. Mary took an active part in God’s plan, she laboured in order to bring to God all the elements His merciful plan required so that He could take flesh and redeem us.

The holy Father of the Church, Saint Nikolaos Kavasilas explains what these features were: ‘Blameless conduct, pure life, rejection of all wickedness, practice of all the virtues, a soul purer than light, a body spiritual in all things…’.As we sing at Matins on the eve of the Annunciation: ‘Christ loved your beauty, most pure Maiden, and dwelt in your womb… that the human race might be saved…’.

By accepting active participation in God’s merciful plan, Mary herself says, in a prophetic spirit: ‘For behold, from now on all generations will call me blessed’. And indeed, the same year, Elizabeth, filled with the Holy Spirit, did that very thing: ‘Blessed are you among women and blessed is the fruit of your womb… And blessed is she who believed that there would be a fulfillment of what was spoken to her by the Lord’.

We can’t enter to go into an Orthodox Church without being greeted by an icon of our Lady the Mother of God, bringing us into the mystery of our salvation. We can’t pray, we can’t think about the Church, without reference to her whom God’s grace- and her own perfect conformation to His will- made the All Holy Mother of God and Mother of the Church.

And we also know that all Orthodox Christians have her image in their hearts. In the hidden depths of their souls, ordinary, anonymous people who escape the web of history but not the gaze of God, always have a candle lit for Our Lady. And the more the pall of darkness thickens, the fiercer out torments become, the more we hasten to hide in her arms, to let our tears flow on her lap. We flee to her as our Mother, expecting to feel her hand wiping away the tears, giving us strength and calming our turbulent souls.