Saint Nestor, the Martyr for Christ

We know very little concerning the martyr Nestor, other than that he was a close spiritual brother of Saint Dimitrios. He may have volunteered to fight the giant Vandal, Lyaeus, in order to prevent other Christians being drafted in to do so against their will. According to Saint Nikolaï Velimirović in the Ochrid Prologue, the emperor, Galerius, entertained the people with such spectacles and had a platform built on which Lyaeus wrestled with his opponents, and having overcome them, tossed them over the side onto a forest of spears. 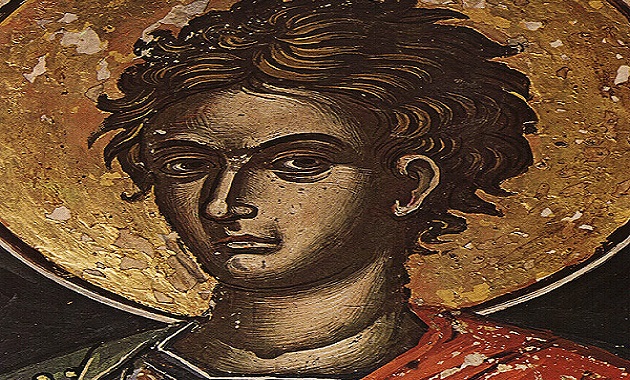 Before the contest, Nestor went to the prison where Saint Dimitrios was being held. The latter blessed him and told him that he would be victorious but would then be martyred.

On entering the arena, Nestor shouted: “God of Dimitrios, help me”. Much to everyone’s surprise, the stripling novice defeated the previously undefeated imperial champion, Lyaeus, and thus struck a blow against idolatry, because many of the spectators believed that “the God of Dimitrios” had, indeed, helped him. This infuriated Galerius, who must have suffered considerable loss of face, and he ordered the decapitation of the young man.

Saint Nestor was born in Thessaloniki, (or perhaps Constantinople), and is believed to have been about twenty years old when he was martyred. The iconographer Fotis Kondoglou (1895-1965), in a reference to the appearance of Saint Nestor remarks that he was “a young man with the beginnings of a moustache but no beard”, while Theodoros Metokhitis (1270-1332)  notes that he was “an excellent foot-soldier of Christ”.

There is some evidence (in Saint Neofytos, for example) that the place where Saint Nestor was martyred was outside the Western (Golden) gate of the city. It appears that this was the “gallowgate”, the place for executions, in this case decapitation by sword.

Information persists that there used to be a church dedicated to Saint Nestor to the south of the arena of the city, between the church of Saint Dimitrios and the ancient agora (market). This may well be the site of a municipal park today, below Saint Dimitrios’ Street, opposite the west courtyard of the church.

The Church honours the memory of Saint Nestor on October 27, the day after the feast of the patron of the city, Saint Dimitrios. There is always an archiepiscopal, festal, Divine Liturgy celebrated on that day in the church of Saint Dimitrios. October 27 then, is both the rendition of the feast of Saint Dimitrios and the commemoration of his fellow-martyrs, Nestor and Lupus. There is also a small church dedicated to Saint Nestor near the Kaftanzogleio Stadium (perhaps globally unique!). In Saint Dimitrios’ church, in the narthex, the silver-encased icons of the three holy martyrs, Dimitrios, Nestor and Lupus, are evidence of the continued veneration of these saints by the people of Thessaloniki and by pilgrims from elsewhere.