The Personality of Saint Mary Magdalene, Equal to the Apostles

Saint Mary Magdalene is the most outstanding person in the circle of Christ’s women disciples, and, indeed, the most significant female figure in the Christian Church, after the Mother of God. Her importance for the Church is expressed in the lengthy references to her in the Lives of the Saints.

We have very little information concerning her life. She was born in Magdala, a town to the west of the Lake of Gennesaret and south of the plain of Galilee, which is why she’s known as Magdalene. Her parents, Syros and Efharistia, were pious Jews, with a highly-developed sense of charity and compassion, which they transmitted to their daughter. Mary became associated with the Lord after he cured her of seven demons which were tormenting her (Luke 8, 1-3). Theofanis Kerameas interprets the term ‘demons’ allegorically. In his view, Mary wasn’t under the control of seven demons, but under that of seven demonic energies, the opposite of the seven gifts of the Holy Spirit, as these are numbered by the Prophet Isaiah. Since Mary was consumed by these passions, it follows that she was tormented by demonic influence. 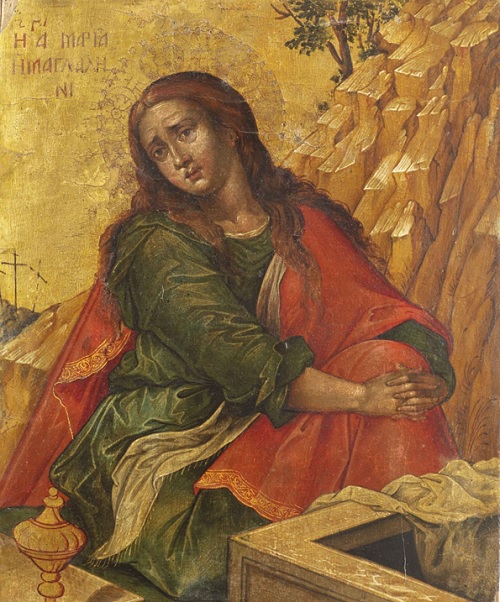 Mary’s cure changed the whole of her later life, since she then became a faithful disciple and follower of Christ. In the person of the Lord, she recognized the Messiah, as He was awaited from the promises of the Prophets, which she knew of from the careful education she’d been given. Her faith and love for Christ as her Saviour and Redeemer were unwavering, since she was never separated from Him, either at the time of His Passion or thereafter. Her love of the Lord was stronger than any fear of persecution, because she felt ready to imitate Christ, remaining at His side with great courage and complete confidence in the Lord and in the Kingdom He proclaimed.

The dishonourable death which the Lord suffered had no repercussions on the way May felt, although she was filled with sadness and despair, as is apparent from her appearance at the empty tomb. The Gospel narratives present her as being the first of the group of the myrrh-bearing women disciples who hastened to pay the respects due to His entombed body. Her place as the head of the band of female disciples is accorded to her by the Gospel writers in recognition of the importance of her contribution and conduct at the time of the events of the Passion and the Resurrection.

The risen Lord appeared first of all to Mary, since her profound faith and guileless love were beyond question. The choice of Mary as the person to make the announcement of the tomb to the other disciples was not accidental, since, according to the Johannine Biblical tradition, she was in a position to recognize the risen Lord and convey the message reliably to all the others.

After Pentecost, Mary Magdalene remained in Jerusalem with Our Most Holy Lady, until the dormition of the latter, and then went with Saint John the Evangelist to Ephesus, staying with him until her own demise, which is honoured by the Orthodox Church on July 22*. The Evangelist buried her there, at the entrance of the cave of the Seven Young Men of Ephesus. The translation of her relics was effected in the year 890 by Emperor Leo VI the Wise, and the feast is kept on 4 May. Her body was taken to Constantinople and placed in a silver casket, in the left-hand nave of the Monastery of Saint Lazarus, which had been founded by Leo.

The person of Saint Mary has be3en the subject of much misinterpretation, particularly in the West. The Eastern Orthodox Church sees her clearly as the Mary whom Christ cured of the seven demons, a women of unshakeable faith, love and charity, who had a close spiritual relationship with Christ, her Teacher. She was the first among the group of His women disciples, though not to the extent of having a leading role, according to the Biblical narratives and their Patristic interpretation.

The Christian West confuses the person of the Mary Magdalene with other figures in the New Testament, among whom are Mary from Bethany, an anonymous harlot and, in particular with a harlot of whom we know nothing except that she anointed the Lord’s feet with myrrh shortly before His Passion**. The last identification is particularly widespread and has led to a variety of misinterpretations related to the Lord and Mary, which are fed by the apocryphal literature of the New Testament. The only point in common between the two women is a) the actual anointing of Christ by a repentant harlot, before His Passion; and b) the intended anointing by Mary and the other myrrh-bearers after His entombment. Some of these confusions have made their way into the Eastern Church, but have had no effect on its teaching.

The Orthodox view of Saint Mary Magdalene is based on the relevant Biblical evidence as this is found in the four Gospels, the Acts of the Apostles and, less certainly, the Epistle of Saint Paul to the Romans (Rom. 16, 6). She is mentioned in the Apocryphal literature, in the Gospel according to Saint Peter, the Epistle of the Apostles, and the Gnostic works the Gospel of Philip, the Questions of Mary and the Gospel of Mary.

The canonical Biblical view of Mary is interpreted authentically in Patristic literature. The references to her person are made within the context of the interpretation of Christ’s Passion and Resurrection. The method followed by most of the Fathers and Church writers such as Gregory of Nyssa, John Chrysostom, Ioannis of Beirut, Leontios of Constantinople, Modestos of Jerusalem, Theofylact of Ochrid and Theofanis Kerameas. An exception is Nikiforos Kallistos Xanthopoulos, whose homily is concerned exclusively with the saint and is a hymn to her personality and activities.

In the same way, Mary features in hymns, particularly those for her feast-day (22 July), the resurrection hymns of the eight tones and those of the third Sunday after Easter, when her memory is celebrated together with that of the other myrrh-bearing women disciples and those who buried Christ. The corresponding icons show her either alone, holding a vessel for myrrh in her hands, or kneeling and stretching out her hands to the risen Christ outside His empty tomb.

* This in itself is of great significance. Essentially she was being recognized as a member of the holy family [WJL].
** And not only. There’s a fine wooden statue in the Museo dell’Opera del Duomo, in Florence, which is known as The Penitent Magdalene. Unlike the roughly contemporary paintings by, for example Caravaggio, Tintoretto, El Greco and especially the two rotund figures by Titian, the statue shows an emaciated and ragged woman who is much closer in appearance to our descriptions of Saint Mary the Egyptian.