The Power of Faith (4th Sunday in Lent)

The incident mentioned in today’s Gospel reading (Mark 9, 17-31) is placed immediately after the Lord’s descent from the mountain on which He was transfigured before three of His disciples. After the glory of the transfiguration, Christ encounters human wretchedness in all its tragic woe: a suffering father begs Jesus to heal his sick child, whom the other disciples, that is the nine, had previously been unable to cure. So, Christ was faced, on the one hand, with suffering and bruised humanity, and, on the other, his surrogates, who were unable to help. And, as if this weren’t enough, He also saw the scribes, that is the theologians of Judaism, talking to His disciples and doubtless trying to shake their faith in Him. All this made Jesus burst out with the phrase: ‘Oh, faithless generation, how long will I be with you?’. 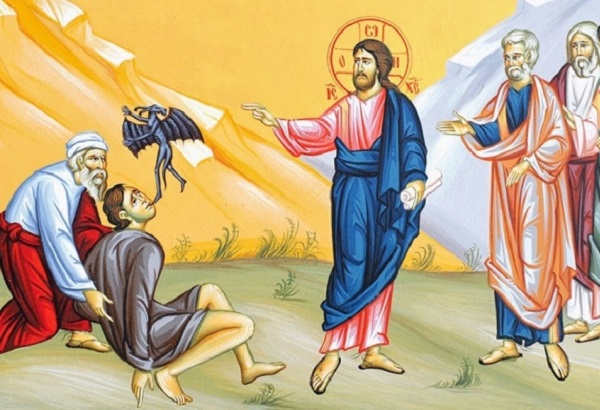 But He doesn’t dwell on this outburst of anger and He doesn’t condemn anyone. He provides treatment to the sick person before Him, who had been suffering the terrible consequences of his illness from childhood. But before working the miracle, Christ asks the father if he can believe, because everything’s possible for those who do so. The unhappy father, with tears in his eyes, allows the struggle within him to declare itself: ‘Lord, I believe. Help my unbelief’. He makes clear that he has faith in the power of the Messiah, with Whom he’s speaking, but, at the same time recognizes the unbelief which accompanies him and the whole of his sinful generation. He struggles with belief and unbelief, between his genuine desire to be as full of faith as he can be and his sincere acknowledgement that his faith is inadequate.

And Jesus provides the cure. He didn’t come in order to condemn people who had become enslaved to wickedness, corruption and death through their actions, but to serve and save. The Cross, which is heralded at the end of the narrative, is the symbol of service and the gift of life to humankind.

At the end of the narrative, the people involved disperse and are lost to us. What the Evangelist wants to stress in his final remarks is the answer Christ gives to His disciples when they ask Him why they were unable to cure the sick boy: ‘This breed can in no way come out except by prayer and fasting’.

In every age there are many demonic manifestations in the world. Even if we accept that illnesses have cause other than demonic possession, there are still so many other facets of life which bear testimony to our subjection to the power of evil that we’re forced to pose the anguished question: why can’t the Church cure evil? Is there perhaps a lack of faith, prayer and fasting?

Often enough we’re more than willing to judge, to apportion blame and to generalize. We forget that what doesn’t happen in the whole, does happen in individual instances: the power of evil is destroyed and saintly figures make their appearance, bright examples of faith. So, the question isn’t merely whether the Church has the faith required to liberate us from the shackles of the demons, but whether we can believe. In the narrative, Jesus says to the father of the child: If you can believe, everything is possible to those who believe’. Faith makes the unachievable achievable. It can change what human reason tells us is so entirely stable and well-established that any alteration is impossible. It can ‘move mountains’ as the saying goes, and which Jesus uses in another instance. It transforms human wretchedness into glory.

Quite apart from this astonishing power which derives from belief, today’s reading may lead us to another facet of faith: the belief of the suffering father became the cause of the healing of his child; on the other hand, the lack of strong faith among the disciples resulted in the continuation of the presence of evil and sickness in the world and the exultation of the enemies of Christianity over its impotence. So, faith surpasses the boundaries of those who believe and becomes a source of salvation for our neighbor, whereas unbelief has its own social repercussions.

Finally, faith can be strengthened by prayer and fasting. Through these two activities, the power of God passes into those who believe, so that their faith becomes increasingly vibrant and, therefore, more capable of working wonders in society.