As we continue to celebrate the joy of the Resurrection today, we also commemorate the victorious great martyr, St. George.  He was from Cappadocia, born into a wealthy and noble family.  He was a high ranking officer in the Roman army, and a Christian, who was arrested for his faith during one of the persecutions ordered by Emperor Diocletian (284-305).  After a period of horrific trial, he was beheaded and later buried in Lydde, Palestine. In the conscience of the Church, he was immediately recognized as a Saint, inspired by the many miracles surrounding him.   The veneration of St. George soon extended throughout the world, and when the persecutions ended, churches were built dedicated to him in Constantinople, Syria, Egypt, and elsewhere.

The testimony of St. George, his suffering and miracles, are so well known that we need not repeat them here.  It is enough to hear the praise that the Great Martyr George receives in the hymns of the Church, for his great faith in Christ.  He was contemptuous of wealth and power, and he faced his martyrdom with courage and peace.   These actions in the face of such horror moved many of the idolaters, who were witnessing these events.  His Troparion (Hymn) declares St. George the ”Liberator of captives, defender of the poor, physician of the sick, and champion of kings.” 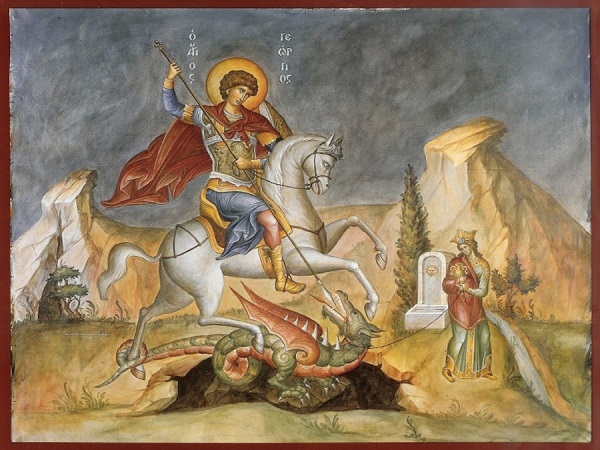 But in St. George we also see another characteristic that made him loved and admired by even those who are not Christian.   What is it?  The love he shows for non-Christians.  In some pictures of St. George, the Saint is shown on a horse in military uniform, killing a dragon with a lance, in order to rescue a woman who was in danger of being eaten.  In a related passage on this, St. George asked the woman about her parents’ faith.   Even though she told him that they were idolaters, the Saint still freed her and the whole city from the beast.

The many miracles of St. George give blessings generally to everyone who invokes him, no matter their religion.   This is evident even in our day, with tens of thousands of people who climb the stairs to the Monastery of St. George located in the Princes’ Islands each year on his feast day.  These people come to venerate his miraculous icon, and most of them are not even Christian.   They light a candle, embrace the icon and beg the Saint to help them.   Many come from great distances to thank him for answering a prayer.   That’s not all.   When there was a large Orthodox population in Asia Minor, the festivities held at the Church of St. George were attended by both Christians and Muslims celebrating together.   This was also done in the Chapel of St. George on the mountain in Alanya, as we are told by the older inhabitants of the neighboring community.   The Muslims in many places also chose to celebrate their ”Hıdırellez” holiday on April 23rd, the feast day of St. George.   This shows their love and honor for St. George, does it not?

This love of St. George that exists in everyone, stems from the love of God the Father, Who-as Jesus said-”makes His sun rise on the evil and on the good, and sends rain on the just and on the unjust” (Matthew 5:45).   The desire that all people come together, no matter what nation or religion they belong to, has been emphasized by our Lord in the well known parable of the Good Samaritan.  This spirit of love for all, without discrimination, also inspired all Holy Fathers and Saints of our Church.   This is an issue that is relevant for today, because of the rapid movement of people all over in the modern world.   We often find ourselves having neighbors in our communities who are from other races and/or religious beliefs.  The Christian should surround them with love, in the spirit of the Gospel.  They should not be seen as an enemy or despised because they are ”the other.”  If possible, these people should be helped and served as needed.   As St. Nektarios says, ”religious differences do not abolish love for one another.”   No matter how a government chooses to deal with a migration or refugee crisis, Orthodox Christians must approach them with Christian love, especially those who have been forced to leave their homes. Remember the words of the Lord that He will say in His Second Coming: ”…I was a stranger, and you took Me in…” (Matthew 25:35).

My brothers and sisters, let us imitate the love of St. George for all, and invoke his intercession for every difficulty in our lives.