The Grandeur of the Mother of God [2]

So humility which comes as a natural result after we sin, especially when these are mortal sins, is one thing, and the humility of Christ is another. For sinful people, humility’s absolutely necessary for them to stay alive, so that they won’t be swallowed up by the devil. The humility of Christ, on the other hand, is a divine garment, it’s magnificence, it’s power. And Our Lady had this divine raiment in its entirety, which is why the whole of creation bows down before her, even the heavenly powers. According to Saint Matthew the Evangelist, when the Lord went to the Jordan to be baptized by the Honourable Forerunner, the most formidable of our saints, after Our Lady, John would have hindered him, saying, ‘I need to be baptized by you, and you come to me?’. Here we see a blessed hesitation on the part of John the Baptist, because he hadn’t received the whole of the raiment of divinity, whereas it would have been unseemly for the Mother of God to say these words. 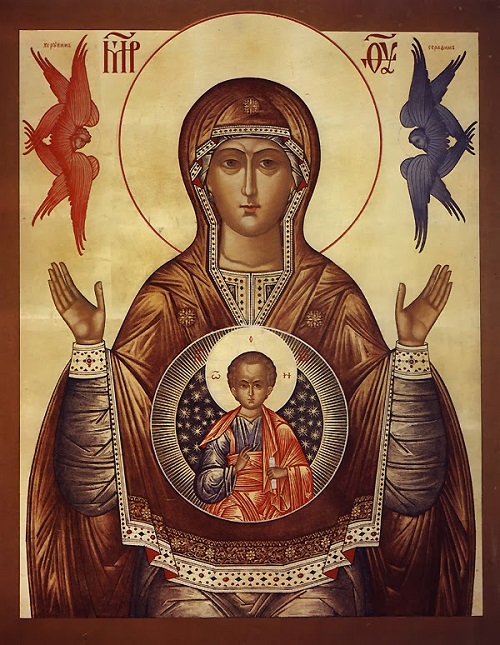 Things were different for Our Lady, because, when the Archangel Gabriel visited her at the Annunciation, he said: ‘Behold, you will conceive in your womb and bear a son, and you shall call him Jesus’. There was no hesitation on the part of the Mother of God, because she was possessed of the whole of the raiment of divinity, which gave her a divine certainty. This was something which even Saint John the Baptist didn’t have, because he was caught in a dilemma and asked the Lord: ‘But how can a servant baptize his Master?’ Our Lady had no such hesitation, nor did she feel unworthy, as would have been the case if she didn’t have divine humility within her. The only thing she asked of the Archangel was a perfectly natural question: ‘How is this going to happen to me, since I haven’t known a man?’ Then the Archangel gave the Mother of God the necessary explanations, of which we’re all aware. This question on the part of Our Lady doesn’t indicate doubt or lack of faith, as was the case with Zachariah when Gabriel announced to him the conception of the Honourable Forerunner. Zachariah doubted and expressed lack of faith, saying: ‘How can I be sure of this? I’m an old man and my wife’s of an advanced age, too’. Of course, we all know the penance imposed on Zachariah. That this happened to Zachariah was due to the fact that he had far less humility than the Mother of God. In the case of Our Lady, everything happened with divine precision, a natural concomitant being that the Archangel Gabriel behaved as a servant to her. In other words, throughout the Annunciation, the Archangel saw the Mother of God as his superior. Naturally, Our Lady felt the same towards him, that is, that she was his superior, because that’s the way a soul which has the fulness of the blessed raiment of divine humility feels and acts. So the question on the part of Zachariah expressed his disbelief in the power of God, in the fact that Elizabeth would become pregnant at her advanced age.

The words of the Mother of God, however, were also a confession, because Joseph, her betrothed, was simply her guardian and protector and not her husband, as is the case with other couples. This is why she said these words to the Archangel. And it was necessary for Our Lady to receive these assurances from Gabriel, so that the dogma of our Orthodox faith would rest on foundations made firm by heaven. As superior to the Archangel she wanted confirmation of how the laws of nature were to be overturned, and this overturning could be achieved only by One Who was superior to her, Christ Himself. Once sufficient light had been shed on the whole of this sacred matter, the Virgin gave the Archangel Gabriel her reply: ‘Behold, the handmaiden of the Lord; let it be unto me in accordance with your word’. This requires attention. Our Lady didn’t say to the Archangel: ‘Behold your handmaiden’, because, as we’ve already said, she was superior to him. Instead, she said: ‘Behold the handmaiden of the Lord’, which indicates that only Christ is superior to her. This is the magnificent grandeur of the Mother of God and the blessed raiment of divinity: the humility of Christ.