The Transfiguration of the Saviour

The Transfiguration of the Lord occupies a central place in the Orthodox Church and its theology. It is the event which reveals the glory of the Church and of the faithful. It is testimony to the new situation brought about by Christ’s entry into history.

At the Transfiguration, Christ manifests the uncreated glory of His divinity through His human nature. At the same time, He takes with Him into this uncreated, divine glory those people who were there with Him at the time. 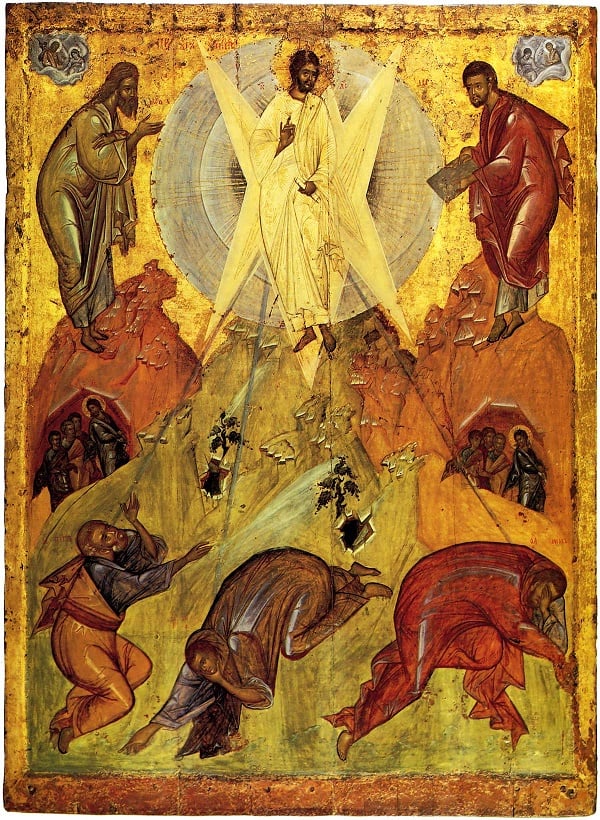 Moses and Elijah participate in the same brilliance as Christ. The only difference is that Christ is the source, while they are the recipients of divine effulgence. The reason why Christ was transfigured before the eyes of His disciples was that the day of His crucifixion was approaching: ‘so that when they see You crucified, they may understand Your voluntary passion’ [Kontakion for the feast].

Through the Transfiguration, Christ, on the one hand, confirms His Godhead, which was recognized shortly before this by His disciples through the mouth of Saint Peter, and, on the other, offers a first experience of the coming of His Kingdom. It may be that celebrating the feast on August 6 doesn’t help us to remember the immediate connection with the Cross of Christ. Only if we remember that, in a few weeks, on 14 September, we will be celebrating the Universal Elevation of the Precious Cross, which recalls Great Friday, do we find any historical relationship to the feast.

In other words, as a historical event, the Transfiguration took place a few weeks before the Passion. From a historical point of view, it would have had its place in the Church’s calendar a few weeks before Easter. Perhaps as many weeks as now separate it from the Elevation of the Precious Cross. It should not be considered coincidental that the Church placed another feast in this position: that of the theologian of the Light of Tabor, Saint Gregory Palamas. So it is that the second Sunday of Great Lent, five weeks before Easter, is dedicated to Saint Gregory.

Besides, it is important to note that the three synoptic Gospels all place the Transfiguration immediately after Christ’s declaration: ‘There are some standing here, who shall not taste of death till they see the kingdom of God having come in potential’ (Mark 9, 1) . Thus, according to Patristic tradition, the Transfiguration is a ‘potential’ manifestation of the Kingdom of God*.

At His Transfiguration,  Christ confirms and strengthens the faith in His divinity which the Apostles had already confessed. At the Transfiguration, Christ did not assume something He had not had before, but revealed His glory as God and human person, insofar as His disciples were able to receive it. In other words, the glory which the three disciples saw on Tabor was not some transient phenomenon, but the eternal Light of the divine nature of Christ. This is what the Church’s hymnographer states when he writes: ‘You were transfigured on the mountain, Christ our God, and showed your disciples as much as they could bear of your glory’ [Dismissal Hymn of the feast].

The light of the Transfiguration is the uncreated light of the Kingdom of God, which came into the world with the advent of Christ. Of course, since the Kingdom of God is without beginning and without end, it’s not restricted in time, but rather overshadows and transforms it. It doesn’t begin after the end of history, but already exists within it and above it and will also continue to exist beyond it.

In reality, then, the ‘potential’ coming of the Kingdom of God is nothing other than its ‘potential’ manifestation. It’s not that something comes which didn’t exist before, but rather that something’s manifested which already existed and will continue to exist forever. Just as the uncreated light  which was manifested to the disciples at the Transfiguration existed from the beginning and remains eternally in the divine and human hypostasis of Christ, so the Kingdom of God, which came into the world with Christ is sometimes revealed to the faithful as a heralding of the future age.

The Christian faith  doesn’t depend on any moral principle or ideology, but is founded on the manifestation of the Kingdom of God in Christ within history. The testimony of Saint Peter is apposite here, since he refers directly to his experience of the Transfiguration in order to declare the truth of the Christian message: ‘For we did not follow cleverly devised stories when we told you about the coming of our Lord Jesus Christ in power, but we were eyewitnesses of his majesty’.

We cannot be freed of the temptations of the earth unless we have experience of the heavens. Christ’s Apostles, the martyrs, the saints, the ascetics of the Church would not have been able to defeat the world, to offer everything for Christ, had they not had some taste of heavenly bliss. Adoption in Christ is gained from this present life. As Saint John the Evangelist writes: ‘Dear friends, now we are children of God, and what we will be has not yet been made known. But we know that when Christ appears we shall be like him, for we shall see him as he is’.

We acquire the sense of adoption in Christ in our life through the observation of His divine commandments. Christians become sharers in the divine life and kingdom through self-denial and self-offering to God and to the will of God, which is a form of death.

The taste of eternity doesn’t begin after the Cross, but with the Cross. Submission to the will of God ‘unto death’ is already participation in the Resurrection. Just as the glory of Christ begins with the Cross, which crushes the powers of the evil one, so the glory of Christians begins with the voluntary acceptance of death for Christ, which crushes the old person and reveals the new.

Christ’s Transfiguration is the preparation for the Cross. And the Cross of Christ is the starting-point of His glory as a human person. At the Transfiguration, Christ doesn’t acquire anything new, but strengthens His disciples in the face of His impending crucifixion. The disciples needed to be thus fortified in order to bear the crucifixion of their teacher, as well as their own cross which they would suffer later in His name.

* We have commented on this in past years, but perhaps it bears repeating. The King James Bible, which has influenced so many other versions, was translated largely from the Latin. So, Mark 8, 39 has ‘veniens in virtute’ (coming in power’), but the Greek clearly says ‘ἐληλυθυῖαν ἐν δυνάμει’ (having come in potential). The strange thing here is that there is in Latin another word for ‘power’ -potentia-  and even a phrase in potentia  which means precisely the same (in posse non in esse) as the Greek from which it was translated, but the translators preferred in virtute. To paraphrase: the Greek text means that there are people who will see the Kingdom of God ‘in miniature’, as it were. They will have a foretaste, a preview before they die. And this does, in fact, come to pass immediately afterwards, at the Transfiguration. Hence the Patristic tradition and Palamas’ theology of the uncreated light, whereby ‘some people’ can have an insight into the Kingdom of God even in this life, before they die [WJL].