The Prodigal Son: Like a dead man even before he died in the body

The Prodigal Son lived aimlessly and wasted all the wealth his father gave him. When he’d spent it all, a famine struck the far-off country where he was and he himself began to starve. In this distant country, far removed from God, there’s always a famine, because the earth can’t satisfy someone who’s hungry. All its food does is to increase your hunger. The earth can satisfy only irrational beasts. There’s no way it can satisfy people. There’s always famine in this far-off land. Sinners who forget God and spend all the life forces which God gave them as their share, will end up starving hungry. This is a hunger that can’t be sated for a single moment by the whole earth with all its goods. 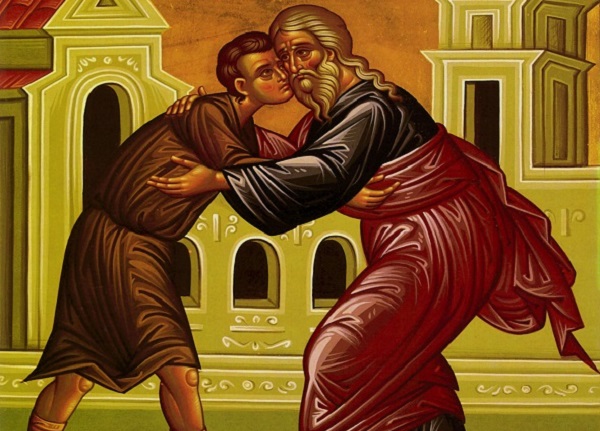 The same is true to this day for all sinners who give themselves over entirely to the earth, the body and bodily pleasures. The tragedy for sinners begins when all of these things become repugnant to them, when they seem dirty and malodourous. Then they begin to complain about the whole world and to curse their own lives. With a dry body, and also soul, they feel that there’s a vacuum within them, a dry reed as it were through which freezing cold air passes. It all seems black to them. Everything’s ugly, disgusting. In this state, in which they’re at a total loss, they don’t know what to do. They don’t believe in their life. So how can they believe in the next one? They’ve forgotten that one entirely and have begun to hate this one. So what do they do? Where can they go? They feel the weight of the universe pressing down on them and they can’t see any door saying ‘Exit’.

The grave isn’t a way out, it’s a point of entry. And when people are in such a state of despair, the devil appears to them. He’s been there all the time, of course, leading them on from sin to sin, but invisibly, secretly. Now he appears openly, however, and takes them into his service and sends them out into the field to herd the pigs. As the parable says: ‘So he went and hired himself out to one of the citizens of that country, who sent him into his fields to feed pigs’. (Luke 15, 15).

This is what happens to all disobedient children who remove themselves from their father. They bid him farewell, full of pride and great plans for their life, their happiness, but end up a servant to someone worse than them. They become swine-herds for a stranger’s pigs.

It’s clear that ‘one of the citizens of that country’ means the evil one. Here, it refers to a person, just as the father is called a person, but he’s described in exactly the opposite way from the ‘father-person’, whom the foolish son left behind. This person here isn’t of the heavenly kingdom, nor even of an earthly one, but of a third: the kingdom of darkness and horror, of decay and Gehenna, the kingdom of the demons. With the first, the father-person, the sinner is called ‘son’; with the other, the ‘evil-person’ he’s called a servant. When he was with the ‘father-person’ he was blessed, he had everything he could wish for and plenty of it. With the ‘evil-person’, he’s starving. So much so that he wants to eat the husks that are for the pigs, but nobody would give him even them.

The pigs here have a deeper meaning. We are to understand them as the evil spirits, the inhabitants of the kingdom of the demons. The evil spirits are the agents of every form of uncleanliness. And the pig is the visible symbol of filth. When the Lord ‘expelled’ the evil spirits from the man possessed in Gadara, He sent them into the swine. Just as the pigs are firmly connected with the earth, the evil spirits strike roots deep into people until they find some filth to feed on. The husks should be understood as all the filth we have inside us, the wicked thoughts, selfishness, sins, filthy and lascivious desires, and the other passions. The evil spirits feed off and are sated by anything that drains the soul and makes it wither. Everything that occurs in the darkness of the soul, where the divine light doesn’t reach, is the impure nourishment of the demonic powers.

But the evil spirits don’t give people this food all the time they’re in their service. They feed them until the moment when they become entirely theirs, when they submit to their power. Afterwards, when they have people in their hands, they’ve got no reason to feed them any more. Their food is poison and these servants have now been utterly poisoned. What had been poison is now their nourishment. As the Prophet King David said: ‘For the enemy has persecuted my soul, he has brought my life down to the ground, he has laid me in the darkness, like those who have long been dead’ (Ps. 142, 3). The Prodigal Son was like a dead man even before he died in the body.