‘Lord, the woman who had fallen into many sins…fulfilled the task of a myrrh-bearer and, lamenting, brought you sweet-smelling oil before your burial’. The Tropario (Hymn) of Kassiani dominates the service of matins for Great Wednesday. A sinful woman, a harlot in her body, realizes the state she’s in, undertakes the role of a myrrh-bearer and brings myrrh to Christ before His entombment. In a most moving gesture of love, she silently anoints the Lord’s feet, washes them with her tears and dries them with her hair, thus demonstrating the reality of her repentance, which the Lord accepts. 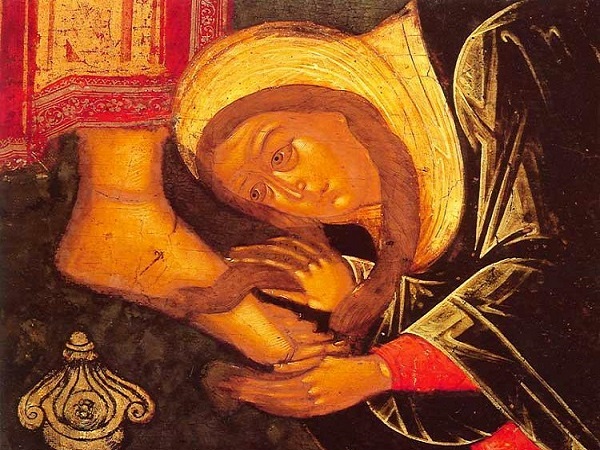 A myrrh-bearing harlot of a woman, whose soul remained sensitive and aware of her sinfulness. Tears, myrrh, humility are all mixed with feelings of love for Him Who redeems her from sin. She doesn’t speak, simply acts. She doesn’t shout her love, simply brings an offering. She doesn’t declare that she’s a sinner, simply repents. She doesn’t fear an outcry, since salvation is more important. She doesn’t stay to enjoy God’s mercy, but simply enters her inner chamber to reflect that, for the rest of her life, she has a heavy debt of love, gratitude and praise to the Lord.

Every soul that feels it doesn’t respond to Christ’s love for it is in the position of the myrrh-bearer. In any case, we all live with things we love other than God. In fact, we often feel that this love is a prison, coercion, a restriction. We rebel against Him and demand our freedom, like little children who throw a tantrum at their parents. We find other loves but can never find the genuine and unique love of Christ.

So when we feel that this is missing from our lives, we set out on the road to return. Silently, because miracles occur in silence; secretly, because hope grows in secret; boldly, before everyone, because we know that Christ doesn’t reject, but rejoices over the return of sinners. People who feel this urgent desire to find their life again undertake the role of a myrrh-bearer and bring their own myrrh to Christ.

Christ’s reaction to the offering of the myrrh-bearer is the same as it is to every human soul. It’s the silent acceptance of the myrrh, the action, the expurgation of sin and the fragrance of love. Indeed, what Christ doesn’t accept is the reaction of others- including His disciples- who hypocritically complain about the value of the myrrh that the woman has wasted. This is the reaction of those people who think that only external propriety is proof of a religious life. Christ, however, welcomes a heartfelt change in people, not the cosmetic acceptance of His words.

Modern times speak to us with words, with lies, with superficialities. Christ offers love, substance, salvation. We need only to be ready to assume the role of myrrh-bears to His person. Then the tears of sorrow will be transformed into sweet joy, that of being accepted as we are, of finding genuine communion with and love from a God Who doesn’t reject but saves people and society.